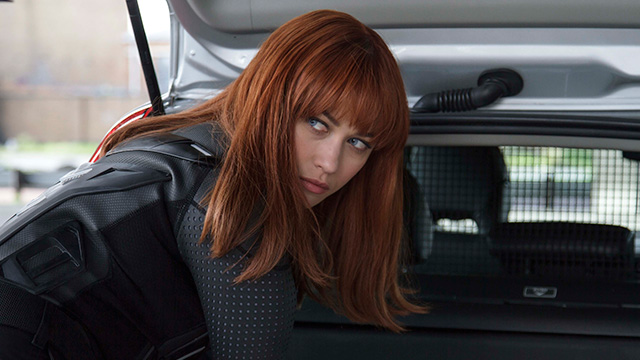 When a film is working on a somewhat modest budget – particularly when entering in to the realm of the ambitious, action thriller genre – the one essential, and the one thing money can’t buy, is a good story. So while there are certainly flaws to Stephen S. Campanelli’s directorial debut from a visual perspective (surprising given the filmmaker’s history as Clint Eastwood’s cameraman), Momentum manages to maintain an engrossing, enjoyably elusive narrative that keeps you guessing from start to finish.

Everything that is mysterious about this picture derives from the protagonist Alex (Olga Kurylenko) – a thief, who is convinced to partake in one final heist, with a collection of immensely valuable diamonds the prize. However she inadvertently got her hands on a drive which contains a video that the corrupt U.S. Senator (Morgan Freeman) does not want leaked – and so he sends his best assassin, Mr. Washington (James Purefoy), to clean up this mess, and not only discard of the video, but all of those who have seen it. What transpires, is a deadly game of cat and mouse across the streets of Cape Town.

Though it’s refreshing to have a female action lead, in a similar vein to the recent thriller Everly starring Salma Hayek, this very much feels as though it’s been shot from the male gaze, with voyeuristic shots of our protagonist undressing, for example. In some regards it helps to form an intimate bond between the viewer and our hero, but at the same time, it undermines her somewhat, and needlessly sexualises her in a way that male action heroes generally aren’t. Kurylenko turns in a strong performance nonetheless, carrying the film well, and allowing for the viewer to invest in her cause. Even though at times the acting is below-par – an issue that spreads throughout the picture like a bad cold – it doesn’t prove to be too detrimental to proceedings, as it’s placed within the surroundings of a traditional, b-movie action thriller, so hardly feels out of place.

That being said, Purefoy makes for an absorbing antagonist, as you fear his presence – but he’s persistently dealing with witty, sharp one liners. Rather than kill people it seems he’d rather just ruin your mind with his clever words. Oh, and don’t be fooled by Freeman’s involvement in the project, he’s on a screen for a grand total of around five minutes. Feels like Campanelli may just be pulling in a favour, but hey, there are worst films for the venerable actor to endorse.