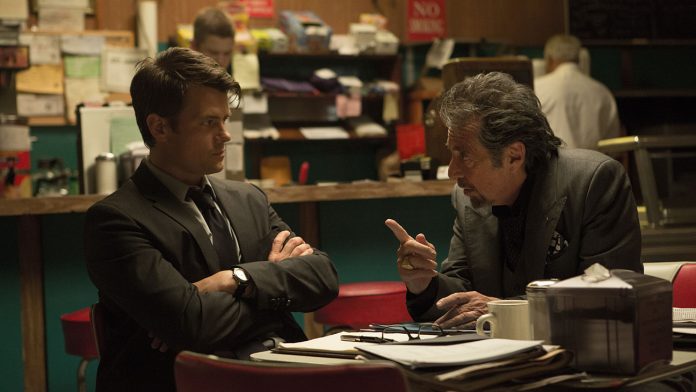 To have a reprehensible, flawed protagonist can often be the making of a fine piece of cinema – but in the case of Josh Duhamel’s Ben Cahill, the lead in Misconduct, he’s an abhorrent prat you simply fail to root for. In films that abide by the ‘everything was supposed to be so easy’ notion, and yet transpiring to be anything but, it’s essential the viewer still maintains an investment, whereby we can just about comprehend the motives of the lead role, like what was recently achieved in Our Kind of Traitor, or even at a push, Fargo.

Ben is an ambitious lawyer, married to the hardworking nurse Charlotte (Alice Eve). Going through something of a tumultuous time, Ben is tempted into meeting an ex-girlfriend for a drink, in spite of the messy break up he shared with Emily Hynes (Malin Akerman). Though resisting the urge, initially, to be unfaithful, he is more intrigued by the information she has on the tyrannical pharmaceutical executive Arthur Denning (Anthony Hopkins) and seeks to manipulate the situation to his own gain, wanting to take on what could be a huge case for him. However little does he know, he’s the one who is being manipulated, and he gets caught up in a complex state of affairs where blackmail and violence are prevalent means of operating.

Though this debut production for Shintaro Shimosawa may not be a deliberate comedy, it certainly evokes much laughter from the watching audience, albeit disbelief for the most part. Illusory and inane to say the least, the means of driving this convoluted narrative along is all too contrived in its execution. It’s okay to have moments of light relief within a thriller of this nature, but when the viewer chuckles they most definitely aren’t supposed to be, as this takes a rather po-faced approach, and much to its detriment.

The character development is all over the place too, as we watch on as the lead roles progress in completely contrasting ways to how they’d been initially presented, in a way that is such a struggle to adhere to. Eve’s performance is strong however, the stand out performer within this title, while the less said about Duhamel the better. Then of course you’re left with not only Hopkins, but Al Pacino – playing Ben’s boss Charles Abrams. Questioning quite what intrigued them about this project remains to be seen, as it clearly wasn’t the enticing screenplay.

Neither stand out either, though there is an entertaining scene featuring Pacino where he, to a group of feverish law enforcers circling him, shouts, “Pardon the theatrics”. It’s a bit late for that, Al.

“What a schmuck…” New trailer lands for ‘Armageddon Time’