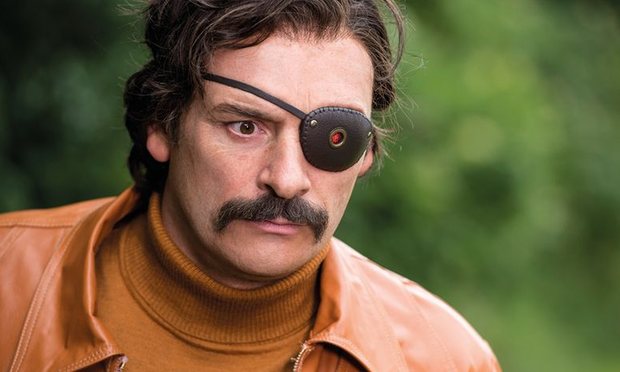 From the creator of The Mighty Boosh, comes an unsurprisingly original, outlandish comedy creation, Mindhorn. Julian Barratt stars as the titular TV detective and down-on-his-luck actor Richard Thorncroft, as well as co-writing with previous collaborator Simon Farnaby. Theatre director Sean Foley is behind the camera for the first time in this sporadically funny, flawed romp.

Mindhorn is an 80’s television show set on the Isle of Man and stars Thorncroft as the turtle-necked, leather-jacketed crime fighter with a robotic eye which allows him to “literally see the truth”. The film opens on Thorncroft at the peak of his powers, he’s the popular star of Mindhorn, he’s the lover of female co-star Patricia Deville (Essie Davies) and his stunt double (Farnaby) is in awe of his leading-man prowess.

Fast forward 25 years and Thorncroft is now an overweight, washed-up actor living in a dreary flat in Walthamstow. He failed to launch a glamorous Hollywood career and he can’t even hold down a job advertising orthopaedic socks. To add insult to injury, his former stuntman is happily married to his former lover Deville, who now works as a local TV journalist, and a previously minor character in Mindhorn named Windjammer (Steve Coogan) has launched a successful career off the back of a spinoff series. However, with his career in dire straits and real-life criminal/delusional fan The Kestrel (Russel Tovey) calling out Mindhorn as his enemy, Thorncroft decides to dust off his eyepatch and confront the crazed loon, hoping it will create some much-needed publicity.

Fans of The Mighty Boosh will lap up the film’s wildly silly tone and there are several genuinely funny sequences, including a slapstick moment involving a collapsing garden chair and some sharp, pointed banter between Thorncroft and his former stunt double. Unfortunately, many of the gags are lazily juvenile and the laughs seriously dwindle in the film’s third act. The premise is pretty formulaic too and the film’s farcical set pieces feel contrived and uncomfortably shoehorned into the narrative.

The problem also lies with Thorncroft’s character. His pompous attitude and cringe-inducing demeanour is far too similar to Steve Coogan’s superior creation, Alan Partridge. Alan Partridge was carefully constructed by Coogan for years before his big-screen outing, and audiences had by then become attuned and empathetic to the awkward, self-centred peculiarities of the character. Whereas Thorncroft’s rushed backstory and idiosyncrasies are expected to strike a chord straight away on the big-screen, so it’s no surprise that it’s hard to feel any sort of affection or amusement for this egotistical, thinly-written character. On top of this, the film’s female characters receive next to no funny lines and feel sorely underwritten. Coogan’s intriguingly despicable Windjammer is also disappointingly underused.

There are a few laughs to be had, and you have to admire Barratt’s and Farnaby’s guts for introducing a new comic creation straight onto the big-screen, but ultimately Mindhorn is a frustratingly slapdash and derivative affair.

Exclusive: “I obsess about class, gender and representation” – Francis Lee on his new film, Ammonite

Win From Bedrooms to Billions: The Playstation Revolution on Blu-ray