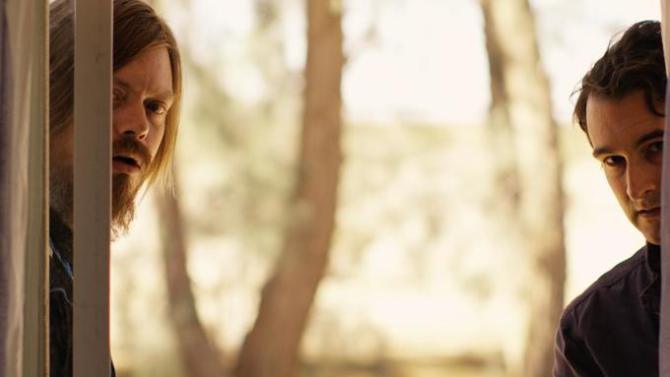 Conrad (Linas Phillips) couldn’t have picked a worse time to re-enter his step-brother Nick’s (Jay Duplass) life; the latter has a lot on at work and at home, not least an increasingly strained relationship with only child Max (Adam Chernick). Nevertheless, he agrees to take some time away from his professional commitments and parenting responsibilities to try to reconnect with his estranged sibling.

Unexpectedly for Nick, this involves re-tracing Charles Manson’s infamous crime-spree across downtown LA, stopping for photograph opportunities at all of the key murder sites along the way. As their day out becomes increasingly surreal and Conrad’s obsession grows ever more inappropriate, Nick has to ask just where this morbid curiosity has come from, and where it might end.

As a directorial debut, it is uncanny just how confident and accomplished writer-director J. Davis’ first film comes across. He has recruited an incredible cast, including genre icon Tobin Bell, in easily his most notable post-Jigsaw role, and the elusive Jay Duplass, a respected figure in the cinema industry better known for making movies than featuring in them, let alone starring.

This weird incongruity – particularly when Linas Phillips is thrown into the mix – is immediately unnerving, and for the first act Manson Family Vacation builds into something truly offbeat and unsettling.

Amazingly for a film in this day and age, even one on the festival circuit, there is a sense until about half an hour in the just about anything could happen, and at least a small part of you spends the rest of the film’s running-time waiting for it to dovetail into schlocky horror or skew into tragicomedy.

The performances are key to the film’s success, and there are a number of truly captivating exchanges between the step-brothers, particularly as they begin their Charles Manson Greatest Hits tour with an otherwise unassuming gate. A sequence set in the LaBianca home showcases Duplass and Phillips volatile relationship beautifully, in addition to their acting skills, as the two seem to irritate and entertain one another in near-equal measure as – having just smoked pot together on the drive over – they attempt to pass themselves off as relatives of the deceased, a ploy aimed at placating the property’s contemporary owners but which only serves to piss them off further.

Their chemistry is both engaging and endearing, the two characters convincing entirely as bickering brothers with more history than either of them would ever care to admit. The flip-side of this authenticity is that whenever their relationship hits turbulence the atmosphere is almost too real to bear.

Unfortunately, the film ultimately falls down as it enters its latter half. Anyone who has so much as read the title could probably make a reasonably informed guess as to where it’s all headed. That said, knowing the outcome doesn’t necessarily spoil the experience of getting there, and Davis’ screenplay is strong enough to make an impact even without the element of surprise.

If anything, the issue isn’t so much the ending and whether it satisfies or not but the perceived lack of a fittingly left-wing finale. Given how much potential seemed to exist prior to the brothers’ trip into the desert – to deliver Conrad to his new job at a so-called environmental organisation – it’s disappointing that it never really pays off either as a horror or a comedy, instead spiraling into melodrama.

Also problematic is the film’s treatment of Charles Manson himself, who appears in short vignettes through archive footage; it’s never entirely clear what the film is trying to say about either the man or his legacy, and some of its insinuations are more than a little troubling.

While some terrific performances (Bell very much included) and a strong opening (an early game of hide and seek is spectacularly creepy) are foundations enough to ensure that Manson Family Vacation remains engaging throughout, in the end it feels sort of like a film without a third act. For a film about a holiday, it’s notably lacking in a final destination.