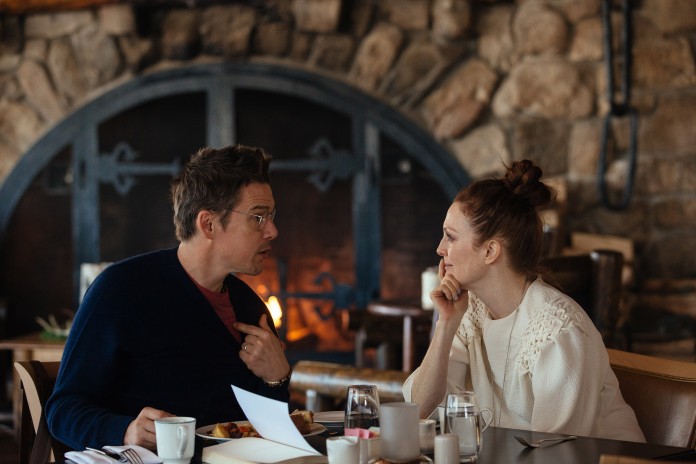 Rebecca Miller’s first film in six years – and only her fifth directorial outing across the last two decades – is Maggie’s Plan, which wears its Woody Allen influences like a badge of honour, implemented in an affectionate, endearing way and in no imitative, nor suffocating to the project at hand. This is a New York set tale featuring a myriad of complex, intersecting relationship narratives, complete with a light charm and self-loathing protagonist. We’re a hypochondriac away from a full house.

Greta Gerwig plays the eponymous lead role, a professor who has a straightforward plan; to have a baby on her own. Declaring her intentions to her close friend, and ex-partner Tony (Bill Hader), she has tracked down an old classmate (Travis Fimmel) and he has dutifully obliged to donate his sperm for her insemination. Partly why she has taken this course of action is because Maggie is convinced no man will ever love her enough to start a family – but then she meets the self-absorbed, intellectual colleague John (Ethan Hawke) and the pair become close when she agrees to proof-read his novel.

It transpires that he is stuck in a loveless marriage to the uncompromising Georgette (Julianne Moore), and the pair fall passionately in love. Fast forward a couple of years, and John has left his wife, and is fathering the baby Maggie had so desired – but when his narcissistic ways start to infiltrate and destroy their relationship, she can’t help but wish she had stuck to her original plan after all.

Gerwig plays a role extremely comparable to that of which we’ve seen her undertake before – in the similarly titled (and themed) comedies Lola Versus and Frances Ha. But that’s by no means a bad thing, for it’s a character she portrays in such an accomplished, sincere way. She’s a pretty, intelligent and confident woman, playing characters of a similar nature – so as we embody the roles at hand and see the world from her perspective, it proves that in spite of seeming to have it all (three rather important facets to any person’s demeanour) – it doesn’t always equate to happiness or self-worth. She has a habit of making us all feel a little bit better about ourselves in that regard.

However Maggie’s Plan does consist of rather contrived, unnatural dialogue. Every character seems to be an intellectual, lecturing in something or the other. It’s all too self-conscious, and detracts from any sense of realism. Thankfully it doesn’t get in the way of a tonally triumphant piece, as a congenial watch and cinematic experience, enriched by the fantastically implemented ska soundtrack, which can only ever help matters.

Win My Life is Murder Series 2 on DVD