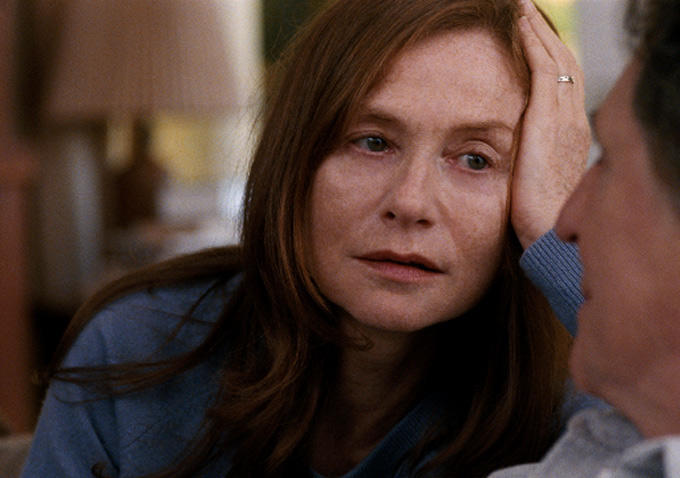 After Oslo August 31st and Reprise Norwegian director Joachim Trier’s first English-language film Louder Than Bombs was eagerly anticipated. Alas, it is a muted and plodding affair, and a title like Quieter Than Hot Air might be more apt.

The story revolves around a grieving family, fragmented by the death of war reporter mum (Isabelle Huppert). It transpires that she killed herself in a car crash, unable to re-accustom herself to civilian life. Her husband (Gabriel Byrne) is an actor who gave up his career in order to care for their two sons Jonah (Jesse Eisenberg) and Conrad (Devin Druid).

The film opens with Jonah in hospital for the birth of his daughter. Running an errand he bumps into his old flame (Rachel Brosnahan) who mistakenly believes he is there as his wife has cancer. Jonah has no desire to correct her and we realise that perhaps marriage and fatherhood are not what he wants. When he shows up at home for a family visit, his wife and baby are conspicuous by their absence.

Dad needs help with Conrad, a silent and brooding teen who spends much of his days and nights either blocking out the world with his headphones or entering imaginary ones on his computer games. There’s a funny moment when his dad explains that he started playing one of Conrad’s games in order to hang out together anonymously only for Conrad to kill him upon their first meeting.

There are other amusing scenes, particularly when Conrad unearths an old scene of dad in a hospital drama, and the relationship between the two sons plays well. Yet there are far too many false notes, particularly Huppert as the war reporter. We simply don’t believe in her or in the couple’s relationship, which we return to in flashback after flashback. The arguments sound tired and trite, and neither parent really gains the audience’s sympathy. Jonah’s affair with his ex seems like an afterthought and it is hard to understand why it appears.

This is a shame, as Brosnahan looks like she could have got her teeth into a meatier role. It’s hard to know what this film is about and who it is for: with the focus so strongly on Conrad it could be a coming-of-age movie, but it isn’t. It is a family drama, but is light on the drama and heavy on the cliché. Louder Than Bombs lands with a heavy thud and did not produce the big bang we had all been expecting.