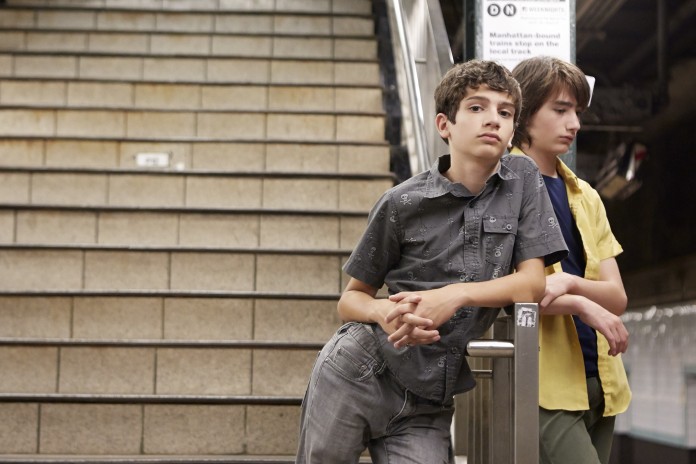 Though Little Men is without the barbed, socio-political comment that enriched Ira Sachs’ preceding endeavour Love is Strange, they’re both similar in tone, as yet another tender, congenial offering from the talented filmmaker. But that’s not to say his latest is without conflict, nor is it undemanding, with a compelling narrative to abide by and follow.

Following the death of his father, Brian (Greg Kinnear) and his wife Kathy (Jennifer Ehle) are left the deceased’s apartment in Brooklyn, and so decide to take their teenage son Jake (Theo Taplitz) and move in. Now above a family-run retail store, managed by Leonor (Paulina Garcia), the youngster becomes best friends with her son, of the same age, called Tony (Michael Barbieri). With an unshakeable bond, the pair become inseparable, but when a contract dispute ensues between their respective parents – with Leonor wanting to remain on the property (now effectively owned by Brian) for the same, discount rent she has been paying for a number of years, it’s a conflict which threatens to tear the boy’s affinity apart.

Sachs – alongside screenwriter and regular collaborator, Mauricio Zacharias – have captured the essence and dialogue of teenage boys to a striking perfection, as a technique we’ve seen so many others struggle with, as youngsters in films can often sound as though they’re merely projecting an adult’s vision, where you can tell they’ve been crafted by somebody a lot older. They come to terms with that youthful exuberance too, to be so endearingly insouciant and intrepid, to say yes now, and worry about the logistics later. The young Barbieri is outstanding in the role too, as a real star in the making. His character in the movie is desperate to get into a prestigious drama school, and on this showing, he’ll have no difficulties whatsoever.

But with Sachs work comes a deeper meaning and a pointed edge, and he ignites an internal conflict within the viewer. You naturally take the parent’s side and feel that Brian is being more than reasonable and accommodating with his demands to Leonor – but having witnessed, intimately, this friendship that has blossomed between the young boys, able to relate it to similar experiences from our own youth, you can’t bear to see it broken up. Especially since, with the benefit of hindsight, we know all too well that such friendships can be so volatile at that age, and though seemingly indivisible, all it takes is for one to move home and suddenly it becomes a challenge to maintain. Seeing them every summer is not enough as you grow up independently of one another, making new friends, gathering new interests, it can be impossible to salvage what you once had.

Little Men is not only a charming, joyous cinematic experience but a profound and moving one too. Sachs has yet again proven that he can remain so faithful to his commitment to realism and his strikingly naturalistic approach, and yet be so genial and warm with it, managing to find the tenderness in life without every compromising on the harsh realities of the world. That’s my kind of filmmaker.