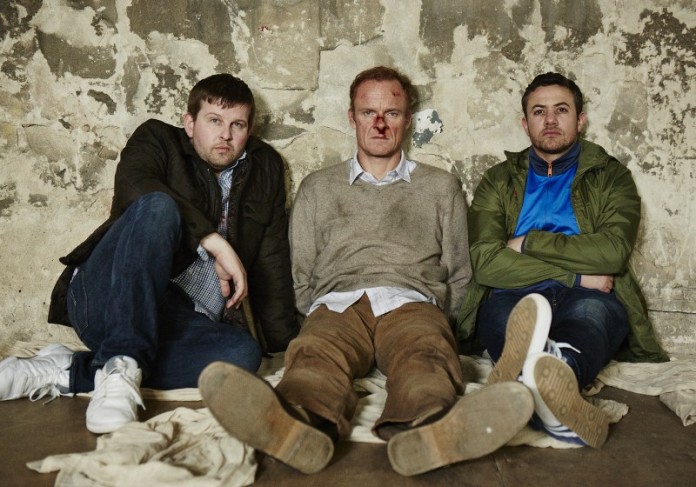 Low production values does not automatically mean a low quality film. In the case of Matt Wilde’s Kicking Off, however, they do. With very little by way of plot, punchy dialogue or even accomplished acting, it’s fair to say that if you’re not interested in football, you’ll be bored. If you are, you’ll be bored and offended, for fans are depicted as nothing more than one-note, uneducated obsessives with very little else going on in their lives. That said, if the content had actually been funny, chances are they’d have gotten away with it.

Kicking Off is about two best friends, Cliff (Greg McHugh) and Wigsy (Warren Brown), who after seeing what would have been a winning goal from their team disallowed, jokingly concoct a drunken scheme to kidnap the referee and force him to admit he was wrong. When one of them actually follows through the next day, the two have to deal with keeping the abduction a secret and figuring out what to do with a man that’s tied to a chair in Wigsy’s living room.

One of the more confusing things about Wilde’s Kicking Off, is that it was unable to coax a decent performance from any actor among the film’s small cast. Having seen both Brown and McHugh give decent performances on British television shows over the past couple of years (in Luther and Fresh Meat, respectively), we know for a fact that the two can act. And, in the case of McHugh specifically, can be very funny. So what went wrong? An over-reliance on swearing in the place of actual comedy and mind-numbingly repetitive dialogue is a start.

The best aspects of the film bookend this picture. The use of split screens, slow motion and imagery of stereotypical working-class Britain in the opening stages serves to generate some real atmosphere for what should have been a genuinely funny story. From then on, however, the pace slows rapidly and the split screens become increasingly frenetic in what seems like an attempt to keep things interesting.

The occasions when we see how their actions are affecting the outside world are also somewhat compelling, but they’re few and far between. It obviously was supposed to have had some impact since the ending features a group of children at the local primary performing a musical version of the story. Though that’s another (rare) enjoyably sweet sequence – it ends a film that is more a test of endurance, than it is an entertaining slice of contemporary cinema.

Kicking Off arrives in cinemas April 21st and on DVD and On Demand April 25th.