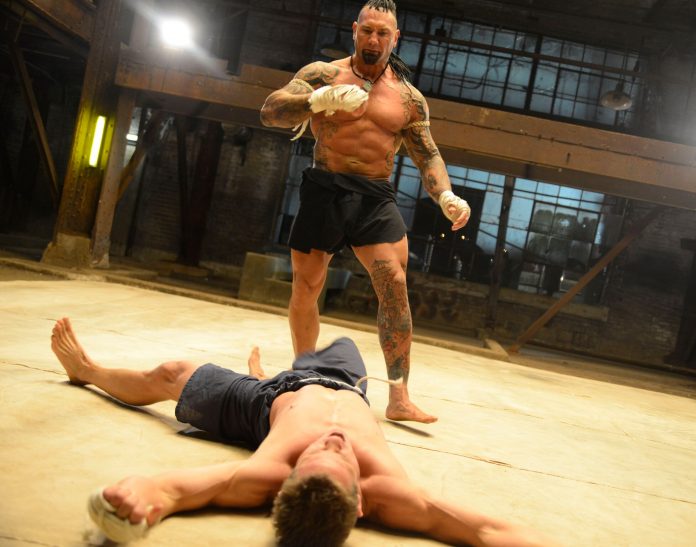 If you’re looking for big shirtless men beating seven bells out of each other, then step right up. Jean-Claude Van Damme is back on the silver screen and returning to his roots, taking on the Yoda/Mr Miyagi role in a reboot of one of his earliest hits – 1989’s Kickboxer. The original combined bruising martial-arts action with painful dialogue, atrocious acting and industrial quantities of cheese, so why mess with formula? That’s certainly the attitude taken by director John Stockwell (Kid Cannabis), although his attempts to replicate a late-night charm that was limited in the first place produce uneven results.

The plot – such as it is – follows a fresh-faced US kickboxer (Alain Moussi) who travels to Thailand just in time to see his beloved older brother (Darren Shahlavi) beaten to death by brutish Muay Thai master Tong Po (Guardian of the Galaxy’s Dave Bautista sporting a fetching loin cloth and little else). Naturally our hero, whose name is Kurt, vows revenge. Without some serious guidance he doesn’t stand a chance though, so he decides to track down a reclusive, fedora-wearing trainer (Van Damme hamming it up) and sit under the learning tree.

For the bulk of the film’s running time he does just that, montage fans more than getting their money’s worth as JCVD dolls out priceless lessons by smashing his young charge in the shins with sticks and chucking coconuts at his head. A water buffalo gets involved at one point too. It’s definitely a case of diminishing returns, but there is some camp, tongue-in-cheek fun to be had. Other scenes which raise a chuckle include the colossal Tong Po sipping tea from the world’s smallest cup and the least convincing declaration of love since the dawn of time (take a bow Sara Malakul Lane).

Still, the well runs dry after a while and Moussi – the poor chap – is about as charismatic as a block of wood. Ripped abs and a perfectly maintained quiff aren’t enough to hold the attention, especially when the fight scenes that are supposed to be his strong point are mostly sluggish and uninventive. A sequence requiring him to fend off villainous henchmen while hitching a ride on an elephant counts as an exception, but it’s not enough to make up for the drag of a final battle. Despite the use of broken glass and twin, samurai-like swords, it’s tedium that reigns supreme.

Andy Serkis on ‘Venom: Let There Be Carnage’, Tom Hardy & returning for a potential third film

Ridley Scott and Jodie Comer on The Last Duel, and the importance of truth