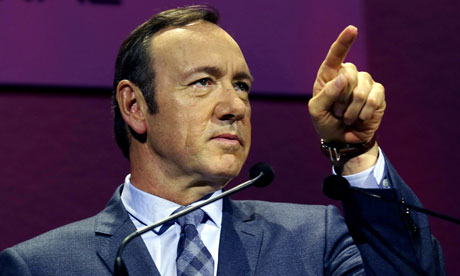 During the course of his career, Kevin Spacey has established himself as an A-List, Oscar-winning star on the big screen, a passionate driver of quality and a catalyst for change on the stage, and now in 2013 he finds himself at the forefront of the revolution of another medium. Spacey of course starred in Netflix’s first major foray into original programming (let’s try and forget about Lilyhammer), playing Congressman Frank Underwood in their ambitious remake of the BBC miniseries, House of Cards.

With David Fincher attached as an executive producer and also directing the pilot, a cast that boasted Robin Wright and Kate Mara, and a high-profile marketing campaign from Netflix, House of Cards arrived amidst a great deal of pomp and circumstance in one singular block of 13 episodes. Generally favourable reviews followed, and then the show made history at the Emmys where it became the first online series (alongside Arrested Development) to receive nominations – nine in all, including Outstanding Drama Series and an Outstanding Drama Series nod for Spacey himself. In years to come we may not necessarily look back on House of Cards as a gamechanger, but certainly as the show that announced to the world that the television game was indeed changing.

Earlier this week, Kevin Spacey found himself discussing said change when delivering the MacTaggart lecture at the Edinburgh International Television Festival. “[In 1990] the film industry didn’t believe that television could ever become its biggest competitor,” Spacey said. “I do not think anyone today 15 years later – [in terms of character driven drama] can argue that television has not indeed taken over.”

“The warp-speed of technological advancement – the internet, streaming, multi-platforming – happens to have coincided with the recognition of TV as an art form. So you have this incredible confluence of a medium coming into its own just as the technology for that medium is drastically shifting. Studios and networks who ignore either shift – whether the increasing sophistication of storytelling, or the constantly shifting sands of technological advancement – will be left behind.”

It’s a compelling argument that Spacey puts forward, and while one suspects there are probably many who would take issue with his assertion that television has unquestionably surpassed film, there’s absolutely no question that over the past 10-15 years the medium has excelled in the field of character-driven drama. Take recent winners of the Outstanding Drama Series Emmy, and compare them to the Best Picture winners at the Oscars. Was Argo a superior character-driven drama to the first season of Homeland? Did The Artist, The King’s Speech, The Hurt Locker and Slumdog Millionaire surpass the achievements of Mad Men. Back in the early ‘90s we’d have been comparing L.A. Law, Northern Exposure and Picket Fences to the likes of Silence of the Lambs and Schindler’s List. We don’t have to agree that quality TV is now better than quality cinema, but we can’t deny that at least in 2013 the argument is there to be had.

But that’s something we’ve been able to witness happening for the better half of the decade, and Spacey’s more interesting points are to be found in his assertion that it’s the nexus of quality television meeting technological advancement that is causing the greatest shift in the medium. Frustratingly, though, while Spacey’s absolutely right, it’s arguably Netflix who are holding back the rest of the industry from learning the lessons that will enable them to take the risks that he’s urging them to take, and to show patience with shows that don’t instantly become huge hits.

Netflix have up to this point declined to release their viewing figures for their shows. We’re fed the line that shows like House of Cards, Arrested Development, Hemlock Grove and Orange is the New Black have been extremely successful, but outside of the company there’s no means of measuring that success. How many viewers made it through all 13 episodes of House of Cards, or did a large percentage give up after just a few? How many people subscribed to Netflix specifically to view these new shows? Are similar shows worth the risk for other online content providers, or are Netflix actually losing money on their original programming at present?

A huge, unprecedented ratings boost for the latest episodes of Breaking Bad on AMC in the U.S. was widely attributed to the previous seasons of the show having been made available on Netflix. The logic goes that while the show has been off the air, many have been able to catch up with the zeitgeisty show and have now tuned in live to watch the final run of episodes live. Meanwhile, here in the UK, we’ve been able to watch the latest episodes of Breaking Bad less than 24 hours after they aired Stateside as they immediately become available to view on the service. There’s no doubt that platforms such as Netflix – because it would be remiss not to mention that other online platforms exist and have their part to play too – are changing the way we consume television and are making waves in the medium beyond their own site, but it’s difficult to draw concrete conclusions while they’re still being so cagey over viewing figures. For now we’re forced to make assumptions, and the TV industry is only going to suffer if they start making major decisions based on assumptions.

Of course, Spacey is right that the industry would be churlish to ignore the shift, and it seems unlikely that we will. The list of pretenders when it comes to ‘quality television’ is growing by the month, and even if many don’t quite hit the high watermark that many have before, it doesn’t seem to be for a lack of trying. The traditional networks are trying desperately to respond to the rise in popularity of cable television, of online content providers, and in the increasing availability of international dramas, but it’s not an easy task. We can see them currently experimenting with summer programming (Under The Dome has enjoyed fantastic ratings this summer on CBS), shorter seasons, online webisodes and the like. We’re seeing shows debut sooner on catch-up platforms like Netflix, in the hope that shows may develop a larger audience while they’re off the air than they ever could during a season. There’s every chance that US networks may stick with a critically successful show like Hannibal longer than they previously would have, and hope that they can utilise new technologies to grow the audience in a way they never would have been able to do before.

It’s entirely possible that in the next few years we’ll see the way television is delivered continue to change, and that innovation may come be catalysed by both creativity and necessity. Online, there’s nothing forcing episodes to be a standard length. We saw Arrested Development vary its episode lengths anywhere between 22 and 39 minutes recently, but who’s to say we couldn’t see a show experiment with episodes as short as five minutes during the same season that contains something feature length. Who says that seasons of TV will continue to be delivered either one episode at a time, or in one big batch. Maybe the idea of a season could disappear entirely, with new episodes of a show debuting as and when they’re ready, or in chunks of episodes that encompass a particular story arc. Structure could begin to conform to the needs of the storytelling, rather than the other way around, and that’s a fantastically exciting prospect. We could see traditional television channels, like HBO for example who are riding high on their successes such as Game of Thrones, start to produce content specifically for their blossoming online platforms, and perhaps maybe even see some switch their business model and go exclusively online.

The possibilities are endless, and it’s important that people like Kevin Spacey continue to raise the issue in order to drive the industry to start experimenting with these new ideas, and to prepare audiences for the changes they’re about to see occur. “We must observe, adapt and try new things to discover appetites we didn’t know were there,” said Spacey, and let’s hope that his current employers take note and allow the rest of the industry to observe, so that they can adapt too.

The Mitchells vs. The Machines Review