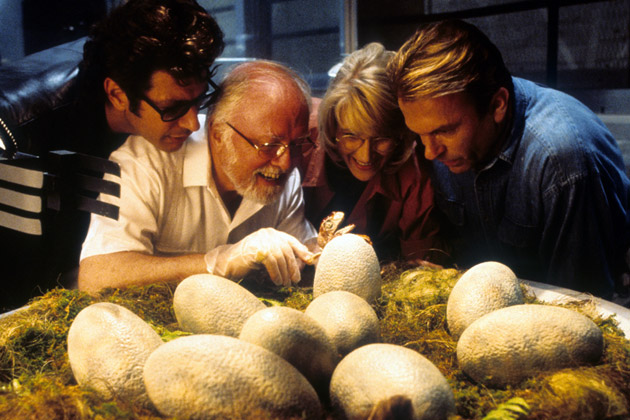 When you think of Hollywood Blockbusters; you subconsciously think of Steven Spielberg. You may not develop a mental image of the friendly-faced, bespeckled auteur, but the brain floods with snippets from his most celebrated works.

Fundamentally, Spielberg created what we now consider a ‘blockbuster’ as his 1975 masterpiece Jaws is widely considered a mainstay of what became referred to as ‘New Hollywood’; an exciting and unpredictable period in which film students such as Martin Scorsese, Brian De Palma, Woody Allen and others overthrowing studio-filmmaking and immersed audiences in entertainment experiences that only the combination of art, technology and intellect could form.

Fast forward to the 1990s and look at what Spielberg has provided us with: E.T. the Extra-Terrestrial, Close Encounters of the Third Kind, the Indiana Jones franchise…all motion pictures which played on popular pulp fiction and pushed the envelope to dizzying effect. It wasn’t until 1993 however when the  grandmaster offered the world a film that would forever change the industry: Jurassic Park.

Today the film remains as heart-stopping and eye-watering as it did 22 years ago. It is a timeless classic which beautifully blends everything that makes cinema joyous; immaculate direction, impeccable production, brilliant storytelling, superb acting and a score that still makes the soul soar.

Just hearing stirrings of John Williams’ orchestral arrangement is enough to send anyone back to Isla Nublar where they stand slack-jawed and awe-struck as they watch a parade of Brachiosaurus’ elegantly chew on the surrounding foliage.

The real genius of Jurassic Park is how it has maintained such wonder over a vast period of time, and equally how it has inspired a generation of filmmaking practices since its inception. The aesthetic construction of the fearsome prehistoric beasts is something of a true marvel; Spielberg initially intended to bring King Kong creator Bob Gurr into the production frame but after careful consideration, he opted to progress forwards rather than mimic the past too closely.

Hiring the legendary Stan Winston – one of Hollywood’s most prestigious make-up and prosthetic artists – to build and flesh out the animatronic dinosaurs, and employing creature animator Phil Tippett to function the go-motion dinosaurs for long shots and wide angles, Spielberg was able to craft representations of the Jurassic era in both practical and digital form.

Before his untimely death in 1990, universally celebrated puppeteer Jim Henson – creator of The Muppets – constructed a dinosaur exhibition alongside The Natural History Project which featured a plethora of true-to-life animatronic replicas which is what Spielberg and his vast production team strove to achieve with their motion picture.

By having the psychical creatures in frame, it enables the sense of scale to vastly heighten for all involved – be that cast, crew or audience – and consequently those populating the frame provide a more humane and balanced performance.

Often these days, actors have to employ their deepest emotional responses to things which aren’t even built, let alone alongside them. Green screen technologies and motion capture are so dizzyingly capable that the need for such visible practicality is merely an ill expense. Yet despite this modernised argument, it is undeniable that the extinct monsters look and feel more authentic than many other screen depictions which have followed in these mammoth footsteps.

Despite the ever-evolving capabilities of the computer, a large quantity of Jurassic Park‘s design – both narratively and visually – is still apparent in today’s Hollywood. For every gigantic sequence Spielberg’s picture offers, it is preceded by a series of smaller, more atmospherically intense ones. The most notable example of this is the classic moment when Hammond’s young grandchildren Lex and Tim are stranded in a park vehicle only to be intercepted by a Tyrannosaurus Rex.

When the dinosaur attacks, the film becomes frenzied with panic, but it is how the sequence builds that makes it all the more terrifying and impactful. As the beast nears closer, two glasses of water sat upon the dashboard begin to gentle vibrate; their ripples intensifying with each progressive step. This method of visual storytelling conveys the exact emotion of what the spectator will be feeling as well as those caught within the moment – it dramatically racks up tension by using the most subtle and suggestive motions.

Similar examples of this can be found all over cinema’s current palette; not least in modernised Horror filmmaking in which slight shifts elevated by a rousing score lead to something deeply shocking. What is more remarkable than perhaps those lending homage to Spielberg’s film however is that it is scenes like these which audiences so fondly recall.

We can be utterly stunned by the breathtaking roaming beasts upon the silver screen, but we will always relate and reconcile with footage populated by our kind. Thanks to such intelligently founded characters – ones which are fully dimensional and believable – the spectator cannot help but become lost in their story and their world. We feel part of their experiences; whether good bad or indifferent, and this is something that the director and source material scribe and co-screenwriter Michael Crichton understood.

Besides references in fellow works, or directors and craftspeople developing the foundations of such formats, the reason Jurassic Park achieves such a vast and respected legacy is because it succeeds at what every great blockbuster should do. It immerses, excites, surprises, dumbfounds and entertains through every minute of its running time.

For many who grew up in the 1990s – myself included – seeing this film on the big-screen for the first time was something of a life-changing experience; it showed the world what we are truly capable of.

We live in a time in which the creation and installation of such an attraction like Hammond’s park is entirely feasible. We have the technology, intellect and resources to extract dinosaur DNA and replicate its genetic code, just like we have the tools and assets to blast audiences off to Isla Nublar and let them experience it in all its wonder from the safety of a folding chair. Scorsese talks about cinema-goers having a somewhat “religious experience” when viewing something truly impactful and ground-breaking for the first time, and chances are a large quantity of people would claim to have experienced such a feeling when viewing this or many other titles from Spielberg’s emphatic filmography.

Chris Pratt signs up for karate comedy ‘The Black Belt’