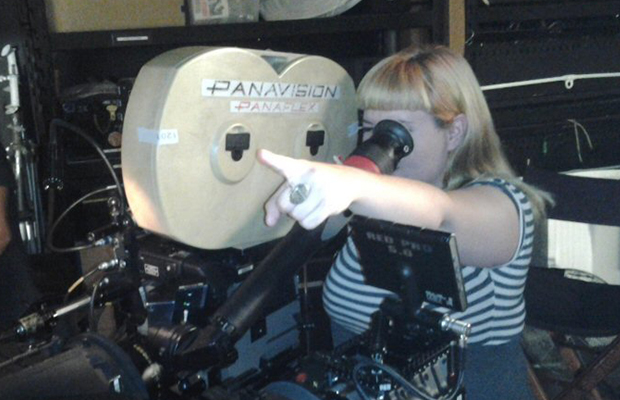 Back in 2014, Julia Marchese, then manager of the historic New Beverly Cinema in Los Angeles, established her own creative project on KickStarter asking for (and successfully receiving) funding to direct and produce “a film about a weird and wonderful double feature revival theatre dedicated to 35mm & cinema…”

That film ­Out of Print ­focuses on repertory cinemas around the America and UK and why tangible 35mm film is so important, in what is truly a heartfelt ode to her former workplace and her unconditional passion for the arts. Julia recently reached her goal on a new campaign, this time to take Out of Print on a UK tour which will see her visit multiple art-house and rep cinemas throughout the country, all with her 35mm print in tow.

Richard Hayward spoke to Julia about her successful campaigns, her cinematic past both in ­front­ of and behind the camera, and her guide to the perfect home­ movie night.

How important was it for you to be able to reach that goal?

Having my film tour the UK in itself is so amazing to me. The fact that I get to attend all of the screenings ­ as well as interview dozens of other independent cinemas ­ is a dream come true. Honestly. Thank you to everyone who shared and donated to help me get there!

How did your in initial idea for Out of Print come about? And what did the success of your KickStarter project mean to you?

There was a letter that came to The New Beverly in 2012 announcing that a major studio was stopping production of 35mm prints at the end of that year. Since The New Beverly ONLY plays 35mm, it was a change that was going to affect it directly. I started a petition online to raise awareness of how big a change the digital changeover was going to be, and how many theatres would be affected by it.

I’m always fantasised about making a film about The New Beverly, just because it is such a unique place, but the petition had such amazing response and it was clear a lot of people out there really care about 35mm and independent cinemas. That’s when I decided to make a film about this subject, and how special each and every cinema is, mainly focusing on The New Beverly.

Obviously, having my Kickstarter campaign succeed was extraordinary, and then comes the realisation: “Okay, I really have to make this movie now!” But I take care of business in a flash ­ like Elvis ­ and the first day of filming was exactly one month from the day the Kickstarter completed! And soup to nuts, the film took a year, but is only just getting released this year. For me it has been a complete education in filmmaking: from an idea, to a finished film on 35mm, to touring the country. It’s been so interesting to see how every little thing works, and also how long it takes to make a film.

Your devoted passion to cinema ­ specifically independent ­ is visible in all of your blog posts and correspondence on Twitter with like-­minded film buffs. What is it that draws you to cinema more than anything else?

I love the way movies make me feel. And I can access those feelings at any time by watching the film again. I fall in love with fictional characters all the time: in a book it’s all totally inside my own head, but with movies I can share those emotions with the others around me, which is pretty awesome.

Where did this love for cinema begin? Do you remember your first experience at a cinema, repertory or otherwise?

My parents have always loved movies, and the first movie they took me to see was Clash of the Titans (1981). I was two. I didn’t even make it to any of the Harryhausen stuff. It opens with a giant flood, and there’s a shot of a bunch of people getting swept off the steps of a temple by the rushing water. I started freaking out and yelling: “Man blow away on the steps! Man blow away on the steps!” over and over until my mom took me out. So, actually, my introduction to cinema was a traumatic one, but I overcame it.

I’m the type of person who watches films I love over and over. The thing that I love so much about cinema is showing the people I love movies that I think are rad, and getting to watch them watch the film. At all of my slumber parties growing up, we would always end up staying up all night watching a VHS, and now I have a weekly VHS night at my house with my friends: it’s never changed! Being with friends, eating some snacky cakes and watching a movie is one of the finest things in life. Watching a terrific movie on the big screen with friends and snacks = heaven.

With your UK tour for Out of Print starting next week, what can those attending expect from these screenings?

A transcendental psychosphere of mind altering images that will lead you to the ultimate truth. Well, maybe not. But there will be a dancing hot dog!

In regards to these mini­-documentaries, what kind of things will you be looking at within each cinema?

What interests me most are the little communities that each cinema ultimately becomes. The employees and regulars develop a sort of relationship. Every cinema I have ever been to has a different vibe. Why? It’s made up of a different group of people, and sometimes that mix of people just feels like home. I want to experience every cinema through the eyes of the people who love it the most.

How best can the general public support indie cinemas, labels and prints? What can they do if there is no place like The New Beverly near them?

If there are no repertory cinemas in your town, don’t worry: start a movie night at your house! Expose yourself to every kind of cinema you can. Explore cinema as fully as possible ­ and doing it with friends is the best way to do it! I have a movie night once a week and it is the most fun day of my week every time.

I’ll tell you how I do it; there are about 8 of us who rotate the choice of movie every week. Every one of us has a completely different taste in film so we get to see films we wouldn’t seek out on our own but we trust that if a friend brings it, it’s worth watching. Even if the movie is bad, we have fun joking around about it, but we’ve also seen some really, really amazing cinema.

The night you choose the movie, you have to bring the snacks for the group as well. However, the snack has to somehow be linked to the film we watched the previous week. So for example, if we had watched Heathers the previous week, you might bring corn nuts, cherry slushies and spaghetti with lots of oregano. It’s super fun, and we always end up with a smorgasbord of goodies!

How do you feel about the future of cinema? Is DCP the way forward, or is there a 35mm revival on the horizon?

I will never give up hope for 35mm; it’s simply a better format. Maybe I’m being Beta tape stubborn about it, but I stand by my statement. Hopefully studios have realised in the last few years that film really is important and are now not as adamant about a complete change. Side by side is the way to go!

There are some revered directors ­Quentin Tarantino and Christopher Nolan to name two, who are known to prefer the corporeal, even filming their last features on beautiful 70mm. What does it mean to you that these influential titans of cinema are speaking up about the importance of printed film?

What have been your favourite experiences in front of and behind the camera?

Getting covered in a bucket of blood ­a la Carrie ­as a cannibalistic sorority girl in Full Moon’s Delta Delta Die! delighted my inner gore­-hound to no end. I’m a weirdo.

As for behind the camera, I’d say every interview I did for Out of Print was my favorite experience. Just to have the opportunity to have a meaningful conversation with any of my interviewees was pretty special, but really getting to delve and hear where their love of film comes from, and their opinions on cinema as a whole was a once in a lifetime experience.

Finally, after watching your acting reel, can we expect more small roles in your future?

I’ve been acting since I was a tiny kid,and have done quite a few plays, short films, and features since I came out here to Hollywood. Directing Out of Print kind of switched my focus for a bit, but I miss acting. I think I’m pretty good at it.

I’ve been waiting for my whole life to cast me in my dream role with none in sight, so I finally gave up and decided to write it for myself. It’s a sixties psychedelic Russ Meyer­esque sexploitation romp, but both sexes will be exploited for once. I think an exploitation flick coming from a girl will be rad and will really blow people’s minds. If you’re a slightly perverted producer who misses the violent, buxotic grind-house flicks of yesteryear, let me know ­ boy, have I got a movie for ya!

Any film can be fun if seen with the right audience. Find yours.

Out of Print is currently available On Demand. Julia’s tour starts this Thursday, with the following venues confirmed.

Richard Hayward is a freelance writer and reviewer, who is on Twitter @BFSRFilm