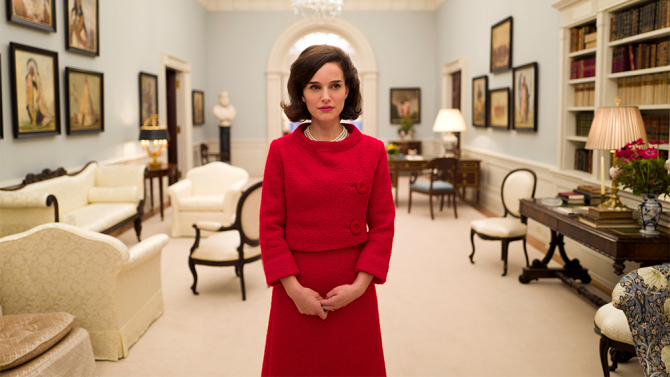 Pablo Larrain has been a constant source of cinematic pleasure from the entertaining Tony Manero via the more intense Post Mortem to his recent oneiric Neruda. Jackie is Larrain’s first foray into English-language film and his first attempt to tackle non-Chilean political issues. The result is supremely accomplished and fascinating.

The film recounts JFK’s assassination, the immediate aftermath and Jackie’s handling of it all. The film opens with a journalist (Billy Crudup) visiting Jackie (Natalie Portman) to interview her shortly after her husband’s assassination. Very quickly the audience sees the many faces of Jackie: the grieving widow, the manipulator, the victim and the survivor. She’s a savvy interviewee, totally in control even as her world collapses around her. The scenes between Crudup and Portman are a treat: playing a game with each other, negotiating rules, vying for some power over their conversation, it is always Jackie who comes out the winner.

The director has chosen to portray the events by shifting in time and place, in sequences beautifully edited by Sebastian Speulveda (who was also responsible for editing Larrain’s The Club). The film starts after the president’s death, but we go back to that day in Dallas more than once. We see Jackie at the funeral and with her children once they’ve vacated the White House, but we also see her and her husband together on different occasions. As with Neruda, Larrain makes brilliant use of colour and texture to portray different realities: the harsher, colder light of the interview scenes, the drenched hues of the past, and the grainy footage of the funeral. Larrain has also taken Jackie’s famous tour of the White House as a springboard to examine Jackie’s public persona and in doing so shows the vulnerability behind the perfect façade. In black and white, Jackie goes from room to room, her smile wavering, glancing for guidance from her press assistant Pamela Turnure (Greta Gerwig).

Larrain has gathered around him a fine cast of actors, from John Hurt (as the sympathetic priest) to Richard E. Grant and Max Casella. Peter Sarsgaard plays Bobby Kennedy, his grief bubbling below the surface with occasional outbursts of anger. Yet this film is all about Jackie and the acting accolades will all be going to Portman. She is in every scene, often in extreme close-up, displaying a gamut of emotions. What is amazing is her ability to flit between these emotions in quick succession, her gaze and her voice changing in order to convey her state of mind. She is surely the top contender for the best actress gong here in Venice.

It is never easy to take on a story like Jackie. Larrain has made a much more straightforward biopic than his previous film Neruda, but this might be due to the script (by Noah Oppenheim) rather than the director. Another reason is that this is a woman whose image is iconic, whether in her pink Chanel suit in Dallas or her Andy Warhol portrait. There is something so unknowable about the woman despite our multiple viewings of her so whatever we see will always leave us with question marks. Yet there is still room for his imagination and skill to shine. With Jackie, Larrain has created a fascinating glimpse into her world, and with it will gain a larger and deserved following.