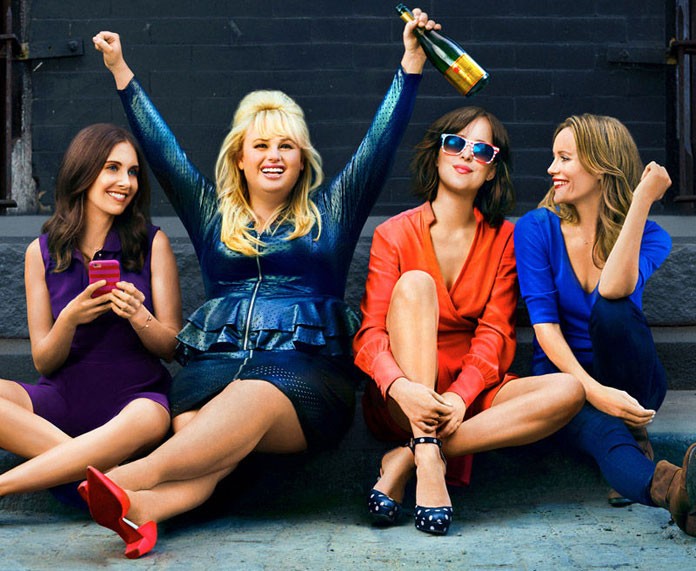 This time last year we were handed Dakota Johnson as our charming new ‘girl next door’ star in Fifty Shades of Grey. Now she’s trying desperately to stay single in New York, the city that never sleeps – the exact opposite to the majority of romantic comedies we see set in the Big Apple.

How To Be Single is based on Sex and the City show writer Liz Tuccillo’s book of the same name – ironically, in the hit TV series, columnist Carrie is always trying to couple up. This new film’s story still deals with bad dates and characters yet to reach their full potential. However, it only just hangs together enough for us to care whether being single is the best situation to finding fulfilment in life.

Alice (Johnson) has just graduated but wants time off from long-term college boyfriend Josh (Nicholas Braun) to ‘discover herself’. She heads to New York, starts a new job as a paralegal, and meets resident party animal, receptionist Robin (Rebel Wilson) – who is more than happy to demonstrate her hedonistic ways, how to get free drinks all night and stay single. Alice’s workaholic older sister, paediatrician Meg (Leslie Mann) initially puts little sister up in her comfy apartment, and while Meg is convinced she’s got the best lifestyle, she gets broody and then finds love in the most unexpected place, in the endearingly goofy Ken (Jake Lacy).

Meanwhile, singleton Lucy (Alison Brie) likes to do the stats on her chances of finding ‘the one’, preferring analysing online dating apps. She uses the free wifi in the bar beneath her flat, much to the amusement of bar manager Tom (Anders Holm). Tom doesn’t want anything serious with any female, even going so far as making his own pad a ‘chick-free stop-over zone’. Who comes out the happiest remains the common thread.

As cute and ironic as this film is, it’s actually several stories running parallel – some getting more attention and screen-time than others. They all connect to Alice in some way, except Lucy’s tale. Hers merely serves to highlight the dominance of online dating nowadays – and its flaws. In fact, Lucy’s is the most interesting too, and though she never actually meets Alice, she somehow ends up at Alice’s rooftop birthday party – as if all of New York’s singletons got the call sign. As fun as it is, Lucy’s story seems rather redundant in the scheme of things, even though Brie is delightfully desperate in the role.

Another subplot thrown in purely for schmaltz value is Alice’s dalliance with handsome and successful businessman David, played by Damon Wayans Jr. He gets slightly more screen-time to shamelessly pull at the heartstrings with a kid sob story – or maybe, it’s meant to be another lesson in being strong and staying single in the city?

Wilson is a screen presence alone – often used to prop up the film’s flagging moments. Nevertheless, we know very little about Robin and why she is as she is – even the end reveal does nothing to explain things. Wilson snatches all the best lines and gets the big laughs as sexually-liberated Robin – just think SATC’s Samantha, only an alcoholic. As Alice is the butt of her jibes, her delivery feels forced sometimes, simply because Johnson’s sweet acting demeanour just doesn’t cut the mustard against a Wilson tirade.

As lovely as Johnson is as Alice – and effortlessly cool and sexy, she just doesn’t have the rom-com heroine charisma to convincingly pull things off, especially opposite Wilson. Thank goodness for the ever-reliable Mann in the trio’s scenes to soften the ‘Rebel yell’. Indeed, Meg’s story is very witty in itself, as the career woman realises that not everything is running as smoothly as she thinks in life. In reality, she and Ken’s chances of survival are slim – where being clingy and bordering on stalker-like is wholly unacceptable, but in the world of the romantic comedy, we can laugh it all off as being quite endearing.

How To Be Single doesn’t really enlighten us in how one should be single, unless you count running away from it, which seems a rather short-term ideal. It’s flawed as things don’t seem to have been adequately thought through, whether this is lost in translation from Tuccillo’s written word or not. The story seems to rely on its dominant characters to pull us through the flatter moments, as Johnson’s casting in the lead is the film’s biggest gamble – and one that doesn’t quite come off.

Win a DVD bundle with The High Note

Exclusive: Kelvin Harrison, Jr. on romantic drama The High Note – and going up on stage with Diana Ross