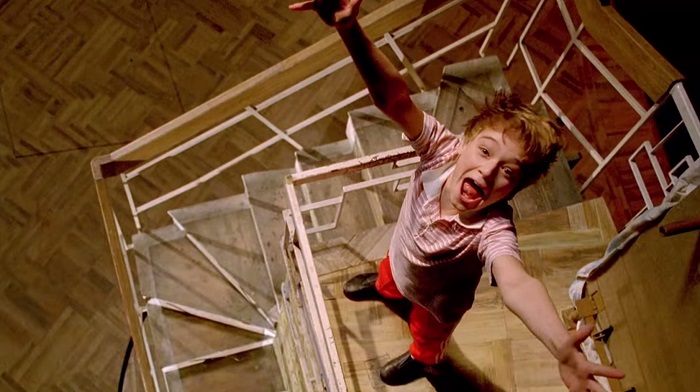 Theatres acquire a special kind of buzz just before a show starts. You can feel the anticipation of the audience in the air, excited to see a show for the first (or with a few individuals maybe even the second or third) time. For Billy Elliot the Musical Live the buzz you feel as you walk into the Victoria Palace Theatre is amplified far above a normal level, and it is completely infectious. The foyer is full to bursting with people, many of whom are the family or friends of the performers; you can tell this is far more than a normal production.

Taking your seat, it is very obvious that you are surrounded by cameras. People everywhere are craning their necks around and trying to count them; there were at least ten in the stalls and seemed oddly out of place next to the aged red and gold of the decor. The main topic of conversation for everyone is ‘who will be here?’ Many of the original cast and creative team are rumoured to be in the audience. An answer to this question walks up on stage. Stephen Daldry himself is here.

Lights illuminate on each of the cameras as they all swing round to face the stage, and we’re live. Stephen Daldry talks to the audience in the cinemas while we cheer and clap for the cameras. A special mention is made of the town in which Billy Elliot is set, as they have had a cinema set up especially for the event. There is a short interval between Stephen Daldry leaving the stage and the cinemas being ready for the show to begin, but everyone in the theatre sits in excited silence. It is nearly time.

Acknowledging its cinematic heritage Billy Elliot begins with a screen showing clips of film. The scene of the miners’ strike is established straight away and remains an essential part of the plot throughout. The issue is dealt with in a way which demonstrates that the harshness of this historical event can be portrayed beautifully through dance. The ensemble of miners do not seem like typical dancers but you get a sense of their camaraderie and that they are ‘all in this together’ they whole way through. Scenes of the miners’ strike are also cleverly integrated into scenes with the ballet girls, highlighting that even children were affected by the fighting.

The show is high energy and utterly engaging, it was easy to forget the cameras were there. Occasionally you did stop to wonder what it was like for the cinematic audience. There is something so real about seeing it live, knowing your proximity to the performers, smelling the smoke from the cigarettes. It is hard to imagine how this translates onto camera. However, it was still all happening live, a rare experience in cinemas and I’m sure it was just as thrilling.

The show contains some very touching moments. The dance with Billy and older Billy had a whole new meaning brought to it as Liam Mower returned to the show in the part of Older Billy. In this case, we were genuinely seeing the future version of one of the first ever stage Billy’s. We get another glance of Liam Mower in the audition scene and the eye contact between the two Billy’s is hauntingly beautiful.

Stephen Daldry promised us surprises and this was definitely delivered with the final mash up dance, which contained 27 returning Billy Elliots. The energy throughout was so high it was a wonder any of them were still standing at the end. It was lovely to see the personality of each individual boy shining through and when they stood in age order it was astounding to see the difference in ages of the youngest to the oldest and how far they’ve all come.

Billy Elliot the musical never pretends that everything is alright. The miners still go back into the mines and we know the reality of what happens next and how the effects of this moment in history are still with us. However, it does show you the power of dreaming, and how Billy’s light of inspiration still burns brightly through the despair. It is not a happy ending, but it is a hopeful one and a wonderful message to be shared all over the country through film.

Exclusive: ‘Rocketman’ tour and Interviews with Dexter Fletcher and more