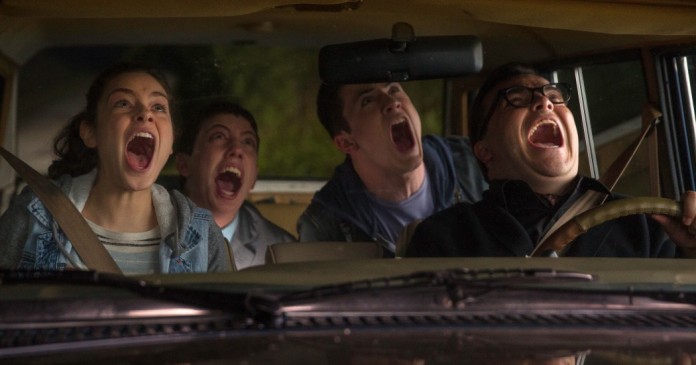 When bringing the celebrated horror franchise Goosebumps to the big screen, it’s essential to capture the essence and tone of R.L. Stine’s considerable collection of children’s novellas. There was always a distinctively irreverent, playful approach to horror, playing up to the tropes in an affectionate, kitsch manner. Reading a Goosebumps book was akin to going on a deliberately overstated haunted house ride at a travelling fairground. An amusing, endearingly low-budget, ‘things go bump in the night’ sort of experience, but ultimately, a rather bad one. But it’s done so knowingly, and that makes all the difference – which is exactly where this Rob Letterman endeavour thrives.

Rather than choose one story in particular to adapt, or to attempt to create a brand new Goosebumps narrative, instead screenwriter Darren Lemke has created a meta tale that features the elusive author Stine in one of the leading roles. Jack Black takes on the part, as an overly protective father to Hannah (Odeya Rush), apprehensive about her friendship with new neighbour, Zach (Dylan Minnette). When the latter fears for Hannah’s safety, locked up in their menacing abode with a seemingly tyrannical parent, he breaks in to save her, alongside his new friend Champ (Ryan Lee).

Upon entering the house they find a unique collection of all of the Goosebumps stories, each book locked. Curiosity gets the better of the teenagers, and they open one up, not realising they have inadvertently released the demons from the page into Madison, Delaware. Stine has a special talent; for what he writes comes to life, unless locked away in the book – but with the sinister, popular antagonist Slappy – from Night of the Living Dummy – in possession of the key, Stine and the three youngsters have to stop the evil forces and return them back to the page, before it’s too late.

With Stine the hero, terrorised by his own creations, this cinematic adaptation works as something of a Goosebumps greatest hits, featuring a host of our favourite, terrifying villains. There’s a remarkably tongue-in-cheek approach to this feature, which is wickedly self-referential. Letterman manages to set this tale in a world where the books exist, and we’re completely aware they are pieces of literature aimed at a young audience – but at the same time we abide by the familiar beats and tropes of the original series, as the situations our protagonist’s get in to are so similar to the characters on the page, which they even comment on throughout. Black epitomises this tone too, with a devilishly exaggerated turn, appearing as something of a pantomime villain, managing to be both overstated and deadpan at the same time, encapsulating the mood and flavour to the piece perfectly.

There has been a Jumanji reboot confirmed to be in the works, but having now seen Goosebumps, which revels in a similar capacity, with a comparable narrative structure and overall concept, it has made this superfluous, forthcoming remake of the Robin Williams classic even more redundant than it already appeared to be.

Jumanji: The Next Level Review