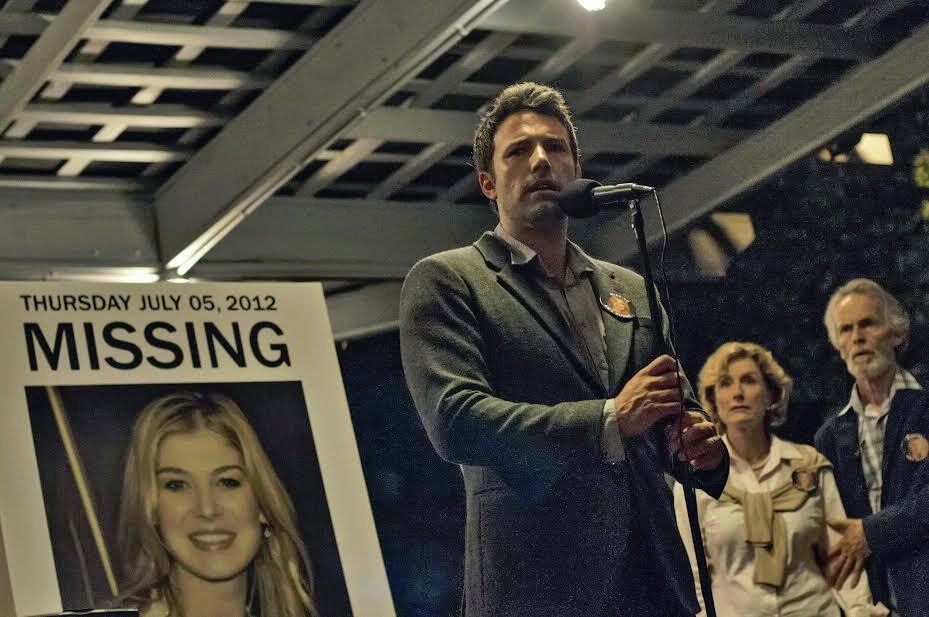 Amy Dunnes’ dramatic disappearance – on her 5th wedding anniversary – is a tabloid dream come true. The poised blonde had Grace Kelly looks and a New York society pedigree. Moreover she was a household name – immortalised by her parents in a series of children’s books which recorded and then improved upon her reality and forever set her in the shadow of “Amazing Amy”. Handsome Nick Dunne makes quite the cover star too, cast first as grieving husband and later as everyone’s favourite suspect. The world is pretty sure he-dunnit despite the inconvenient lack of a body to lay doubt to rest. Amy planned an elaborate annual treasure hunt to test her beloved but this one apparently ended in tragedy. Her living room has been ransacked, there are bloodstains in the kitchen and the Dunnes’ too-good-to-be-true marriage is flung before the court of public opinion before he has solved the first hunt clue. And as the wolves encircle poor bewildered Nick, Amy’s diary offers us a new point of view on her loyal husband…

As Nick and Amy, Ben Affleck and Rosamund Pike deliver a masterclass in duplicity in their deft manipulation of the Dunnes’ complex lives and rising resentments. Rosamund Pike is quite staggeringly good, playing up to and against typecast-type with aplomb. The devastation of a series of apparent storm in a teacup fallouts hasn’t been this deliciously exploited since The War of the Roses. But while Nick and Amy are the cornerstones of Gone Girl it is the tremendous supporting cast who set the stage and permit their stories to splash with such such jaw-dropping effect. In particular Kim Dickens, as Detective Boney, is to be commended because she acts in our stead as a sole voice of suspicion and the only other impartial witness to the incredible events that unfold. Her wry overview helps carry the narrative smoothly through emotional gearshifts. Neil Patrick Harris also shines as Amy’s devoted first love Desi – loving, loyal and ever so slightly sinister to the last.

Fincher plays audience preconceptions and Lifetime movie logic like a virtuoso. Nick actually starts singing the Law and Order theme in an awkward exchange with Detective Boney – catching us all in the act of applying TV wisdom to the potential crime scene. Together with cinematographer Jeff Cronenweth, he has created a picture perfect world with self-enforced Stepford aspirations, an affluent suburbia stumbling under the burden of its secrets and lies. Intimations that Fincher has pulled punches or coasted on this project are without grounds. Like Gus Van Sant’s impeccable To Die For nearly twenty years ago, this is toe-curlingly dark comedy which subtly weaves its intelligence through the warp and weft of horror and social commentary. Ellen Abbott’s (Missi Pyle) gladiatorial arena of a current affairs show cannibalises the tragedy and constricts every gleeful breath of a scandal from the Dunne’s lives. While the show holds a scathing mirror to the Nancy Graces of this world it equally – less comfortably – casts our own reflections back.

Trent Reznor and Atticus Ross’s evocative, immersive, score must additionally be credited for the successful transition between acts, perspective and mood. Their third collaboration with Fincher dances from high melodrama to knowing humour and back without a false step. In clumsier hands the narrative would have hit a few jarring credibility bumps but Gillian Flynn’s screenplay – of her own novel – is as tight as Kirk Baxter’s edit. We simply take on board additional wit, wisdom and knowledge like the little pegs in Margo and Nick’s Game of Life and keep on rolling. This is a razor sharp satire honing its edge on America’s affection for photogenic victims and the husbands who may have offed them. And the US media are not alone in mythologising spousal murder. Karen Ingala Smith’s Counting Dead Women project seeks to highlight every instance of a woman dying in the UK at the hands of a man she knows – and to name them – because, shamefully, our media cherry picks too.

Ordinarily it would verge on literary blasphemy to suggest you watch a film based on a celebrated novel without first reading that novel. If you are not already familiar with Gillian Flynn’s source material, on this rare occasion we are going to recommend that you do just that. Buy the book but set it aside, avoid the trailer, go in blind, shun any friends who want to spoil the twists and turns, sit back and enjoy the ride. Just be sure to read it when you get home.

Gone Girl opens across the UK on October 2nd 2014