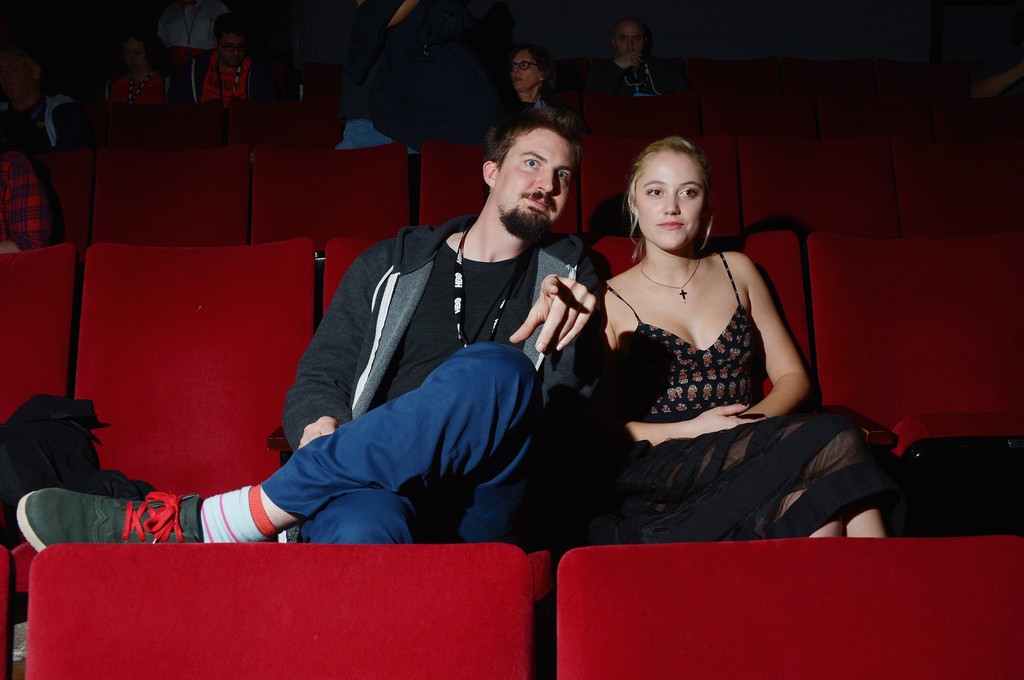 Emerging Scream Queen Maika Monroe explains how she was filled with admiration after piecing together her expectations of the road that lay ahead with Simon Barrett and Adam Wingard for their latest genre picture The Guest. “I met Simon and Adam who are both such intriguing people – so bizarre and talented. Having seen You’re Next I had kind of put all the pieces together, and you could just tell that this was a special group, and this was going to be a special film that would be something different.”

In a special eight part feature ‘Inside the mind of…’ HeyUGuys pieces together a broad set of perspectives behind the work and contributions to genre cinema at this years FILM4 FrightFest. From rising star Maika Monroe, the genre young bloods Simon Barrett and Adam Wingard, Spain’s Nacho Vigalondo, Hatchet horror maestro Adam Green, and the seasoned Veteran John McNaughton, we journey into the creative mindset.

As an actress do you find genres pose different challenges that stretch you in different ways?

Horror films push you to the edge in a way that other genres necessarily do not. It was my first horror film, and so I was excited to explore that, but I was also intrigued by everyone who was involved; from Adam and Simon to Dan who was taking on this role. It just seemed the right next move for me.

Speaking with a director recently he spoke of how he found that he had formed impressions of his actors from their onscreen roles. Having seen You’re Next had you formed an impression of Adam Wingard and Simon Barrett before meeting and working with them?

That’s a hard question to answer. After seeing You’re Next I kind of knew what they wanted to do with their second movie – not that it would be similar, but they had fun with horror, and they had found the humour in it. It is always interesting mixing the two. Not only is it horror but you get a thriller with the 80’s throwback mixed in, all of which was very interesting.

The first time I saw it was with an audience at Sundance, and I had no idea what I was walking into. It was terrifying for me, but after seeing it, and in particular seeing how the audience reacted it was very cool.

Do you find it a nerve wracking process watching any film you have done with an audience, even though it is made to go out there to find an audience, and take on its own identity?

It is terrifying. You want to make the audience feel something; you want to engage them, and you want them to be pulled into your story because that’s why we make movies. We want to make people feel things they wouldn’t normally feel, and so it is terrifying moment, and you just hope that you have done your job well. The pay-off is when you see the reaction and the response from people.

Were you ever conscious of how a scene or moment would eventually play to an audience or is that always far from your mind when performing?

I don’t think I ever really think about the audience, if only because I am there in the moment working with the people around me. Then after you’re done you may think oh crap, people are going to see this. But you just hope that you did a good job.

It occurs to me that there is potentially a side to every filmmaker that is hidden to us, and is one that we may never see.

It’s interesting to put it that way because there’s so much that happens behind the scenes that nobody knows about. I think that’s part of the secret of making movies – that which is unknown to the audience.

As actors you have the opportunity to put on all these different masks, to create a multitude of onscreen identities.

Yes and it’s quite cool. If you think about it I’m Maika; I have my life and I get to be two hundred different people in this one lifetime – to explore how different people live, how they are brought up, and to experience things that most people will never go through. Sure some of them are hard, dark, and are not happy places, but at the same time some are amazing lifestyles.

Actors have told me that no matter how dark the character you need to essentially find a part of yourself in the character that you can connect with. How vital is it from your perspective?

But there are a lot of times where there will be a role that has no piece of me in it, which is also fun because you have to throw away how you would talk and move. It’s like when you watch Dan transform into his character in The Guest, which was insane. He was playing something so far from who he is – not only how he speaks but how he walks and how he moves.

Are you an instinctive actress or do you prefer time to prepare and rehearse?

It depends on the project, and with The Guest it was about getting on set, creating as a group, and figuring out how to work off Dan – how he and I were going to play it. He’s got this certain thing going on, and then I come in with this dry sense of humour. But we were a group, and we would get Simon’s perspective and then Adam’s. We would ask the question how do we want to do this, and we’d even try something different to see what would happen.

So there are roles where there is a lot of prep that goes into it and I have to sit down and focus on my research to figure out what it is I want to do. Then there are other roles where you get on set and figure out as a team how you are going to tell the story.

Is acting a compromise in which everyone has to help find a harmony by showing willingness to give and take when it comes to their individual approaches?

I think it is important that you are working with other people because you can have something so set in your mind, but it does not mean it is necessarily for the best. So it’s good to be open to hearing other people’s opinions or visions when everyone sees the world in a different light. Exploring and experimenting with different things, and with different people’s opinions can actually serve to build a character to an even stronger place.

With the safety net that comes along with a film, is it a great way for the audience and creative team to explore the darker aspects of human nature? There are certain films that if you can connect with have the potential to touch your sensibilities in a powerful way.

It’s definitely interesting to explore the darker side. I think of Clockwork Orange which I saw when I was younger. A lot of people including my mom would say, “No that’s just not good.” But if you let yourself get sucked into it and try to understand why these people do what they do; to explore where it comes from, then it is rather fascinating. As dark as it is, and as disturbing and frightening as it is, there is something intriguing about experiencing that, because you won’t experience it in your normal life.

Would you say your affection for film, stories and performance has grown deeper with each new film?

Yeah definitely! Each film set is so different from the next, and you learn so much as you grow. Just thinking now, I’ve been doing movies for about three years, and in that time from when I started out I’ve learned and grown to become someone who I feel is stronger because of everything I have gone through. That is including the horrible times, the good times as well as the downs. There are a lot of ups and downs in this business, and you have to remember who you are, surround yourself with good people and just learn from it. It’s quite difficult, but you have to be aware of who you are.