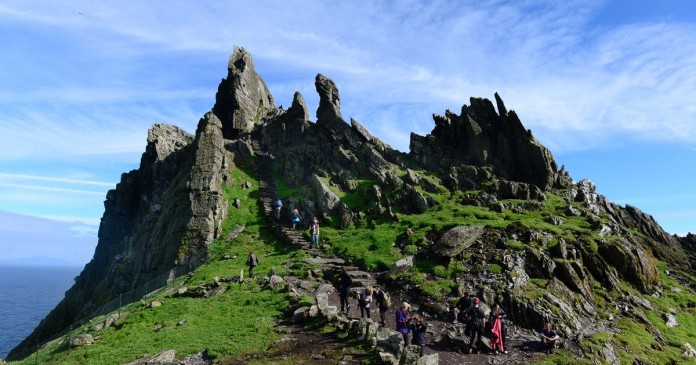 It’s safe to say that JJ Abrams and Disney are warming themselves nicely in theaftermath of Star Wars The Force Awakens’ release. Breaking down box-office records with the unstoppable force of a Bantha on rollerskates the film is set to surpass Avatar as the highest-earning film of all time any moment now. It’s a remarkable achievement.

While we wait for the special features on the Blu-ray to dive into let’s dip our toes today into a brief look at the extraordinary location of Skellig Michael. Discover Ireland posted this video earlier today, proudly showing off the stunning landscape, with JJ Abrams and his production team effusing suitably.

We won’t give spoilers away (but surely you’ve all seen it by now… and know what’s on the island…) but a leaked version of the script gives the island what the film didn’t – a name. The planet’s name is Ahch-To and looks set to feature prominently in Episode VIII (or ‘Act Two’ of the new trilogy).

JJ Abrams also spoke (puffins!) on the beauty (puffins!) of the island at the London (puffins!) press conference which you can see below the featurette.