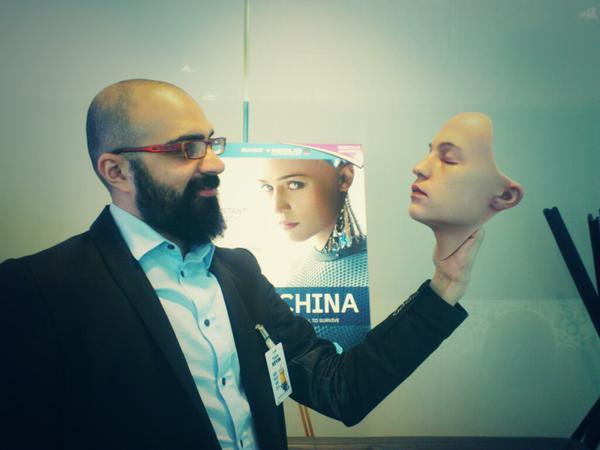 Special effects are at their best when they are, well, special and effective. Some CG is so obvious it takes you out of the film, and sometimes it’s just so bad its Dwayne Johnson in The Mummy Returns.

Of the many recent examples, you won’t find any better than the effects used in Ex_Machina.

To mark the release of one of year’s best films on DVD and Blu-ray, we had a chance to explore the world created by director Alex Garland and found out that just like the films genius inventor Nathan (Oscar Isaac), there are more challenges than meet the eye.

Upon entering a top secret location in Central London, we were able to get a look at some of the amazing props that went into the making of the film. As well as a selection of masks that were used in the production we also got a closer look at the bodysuit worn by Vikander that was essential in creating the look of Ava.

“Alex [Garland] had a concept that was very set in his mind that was drawn up and we had many discussions on how to approach it. We started experimenting and figured out what we could do.” explains Sammy Sheldon Differ, who was the costume designer on Ex_Machina.

“One of the main things was the surface, the mesh, which was needed to make her look this way. We ended up making it out of a polyurethane with a metal powder in it. We experimented with UV paint as well, to get her to light up, but that was actually a disaster.”

The suit created is tiny, but had to also remain highly functional.

“The brief was to make her look like the mesh was just stuck to her and when she moves it has to move with her. That was really difficult because when you put fabric on, it wrinkles. Its in three sections, but the biggest challenge was to get rid of the seems. We made it in one piece.”

The outfit is exactly as you see in the film. There were no green sections added on set. Instead a team from digital effects house Double Negative would see the footage and animate from that.

“Some of the design feature were to help us out.” added Dan Kripac and Graham Jack from Double Negative. “If you see those metals studs at the top, as well as being a nice design feature, we were able to use those to track her movements. It had to remain very tight to her body.”

It looks like a an uncomfortable costume to put on, was there much feedback from Alicia?

“Oh yeah…” laughs Sammy, “ It was really tight and we had to keep her cool a lot. She was really good actually. The idea was to take it off when we weren’t shooting on set, but it was too difficult so she literally stayed in it all day. When you see her moving sometimes before the CG, there are some scenes when the suit moves there were ones she wore to allow her to do stunts. We made eight in total.”

It was again the decision of visionary director Alex Garland that the outfit would be mesh and would look this way. It had to have a hexagonal look, it was all very calculated. But as Sammy explained, there wasn’t too much time in pre-production.

“I had 10 weeks. 4 of those weeks were spent on experimenting. It always varies though. I only had 5 weeks for The Imitation Game that did after this, but then had 8 months on another film I did last year. One thing we learned was that there could have been another method, but we didn’t quite have enough time. There was actually a lot of R&D on this.”

The Double Negative team go on to explain what co-stars Oscar Isaac and Domhnall Gleeson were working with on set.

“One of the key things was that there was always something real there. From our perspective it felt like the perfect collaboration, because you have someone there who looks like she looks in the finished film but then something that ends up also looking otherworldly as well.”

Did everyone know what Ava would look like when the effects and post-production were completed?

“Yes. There was a lot of concept art we were working from. We had some images and designs from out concept artist, Jock, who created a book. His work was before, and we then played with it for some of the lines. In drawing things can look really cool, but you have to change them depending on the actress.”

Was there anything that was requested that couldn’t be done?

“It’s his vision. We were able to work on ideas to make it all work together.”

“There are some effects, like the one where one of the characters gets stabbed, where it was too difficult to do as a practical effect.” adds Adam Rutherford, science and AI advisor on the film. “There was no blood on set.”

We watched the scene during our visit with the before and after shots to emphasise just what went into its creation. It’s one of the extras on the Blu-ray release, as is the commentary which explain why this method was used.

“That is the sort thing that a lot of visual and digital effects involves. Obviously you look at Ava and think ‘there are effects used here’, but its the hidden things like CG blood that get us excited as well.”

Ava has a very particular movement and a very distinct sound that goes with that. We asked Glenn Freemantle, Sound Editor on the movie, how he went about creating that.

“I work with Alex a lot, in fact I’ve done every film he has made. The thing is, he never tells you what to do. We did all the design on Ava before showing anything to him, there were no stages. She had to have sexuality and the locations had to have foreboding as there were no windows down there. We didn’t go down the natural route by using servers, we ended up using gyros. Anything we could spin. We recorded them in water and oil, because we wanted soft sounds to draw you in. She is a robot, but we had to make it so the characters and the audience accept her.

“We experimented a lot. You never know what you’re going to get. You have it in your head. The idea for the oil was to keep it really soft. For ages it didn’t work at all, but then we got this one sound that when we did it at a really high frequency and high-res, it worked. We could crossover over the rhythms. It all feels organic. She disappears in terms of the sound as the films goes on, you see her add skin and get dressed, and so the sounds dissipate too. It draws you in, and when you see it again you can pick it up more.

“It was the same as when the colour changes on screen. When it goes red, it more alert and threatening. The blue was relaxed. It was all subtle, just like the movement. Just as they accept her in the film, you do too when watching it. Inside was dark but outside was open and natural. Again, we created the emotions of that.”

“It was essential We had the conversation of why not just put it in a grey box. But it had to be beyond a Turing Test because you can see her. She has to have a body. She is playing a human and emulating a human which is obviously different from being a human. That was the central premise of the film, she needs to convince us that she needs rescuing otherwise we won’t believe that Caleb will do it. It’s an emulation of that.”

“We are decades away from creating an Ava, at least. There are many significant barriers in scientific terms. Also, in robotic terms, we just can’t engineer things to behave as human bodies do. They can build bipedal robot drive a car like a human, but they just can’t make one get into a car. That simple movement we can do of twisting our hips after millions of years of evolution, is something engineering just can’t”

So for now, it looks like the closest we can get to an Ava is the VR version. We tried out a headset, which rather brilliantly was partially powered by a standard mobile phone unit. It allowed us to see Ava, and the world created in the film, through the eyes of Caleb. It was Samsung Gear VR, powered by Oculus, another example of technology that is fast becoming associated with the film industry.

We got to see Ava enter the same room we see in the film, and speaking to the team behind the experience, we were told that it was the same design used in both.

The headset also included full sound immersion, so we could hear the work of Glenn as well as see the work done by Sally.

Of course, another way to experience the world of Ex_Machina is to watch it at home, which you will be able to do now!

Prepare to witness a chilling vision of the not-too-distant future of artificial intelligence when intense psychological thriller EX_MACHINA is released on Digital Download from 18th May and Blu-ray™ and DVD from 1st June. Oscar Isaac (Inside Llewyn Davis, Star Wars 7), Alicia Vikander (Anna Karenina, The Man From U.N.C.L.E.) and Domhnall Gleeson (Unbroken, About Time) lead the incredible cast of EX_MACHINA, which is the directorial debut of acclaimed popular culture writer – Alex Garland (28 Days Later, The Beach). 24 year old coder Caleb (Gleeson), who works at the world’s largest internet company, can hardly believe his luck when he wins a competition through work to spend a week at a private mountain retreat with his CEO Nathan (Isaac).

Caleb arrives at the remote location and is eerily forced to sign an NDA to take part in the week-long project with the reclusive Nathan. The project is revealed to be a strange and fascinating experiment, where Caleb must interact with the world’s first true artificial intelligence, housed in the body of a beautiful robot girl (Vikander) to test if she can pass as human.

Ex_Machina is out now on Digital Download and on Blu-ray and DVD on 1st June / Film © 2015 Universal Studios. All Rights Reserved.