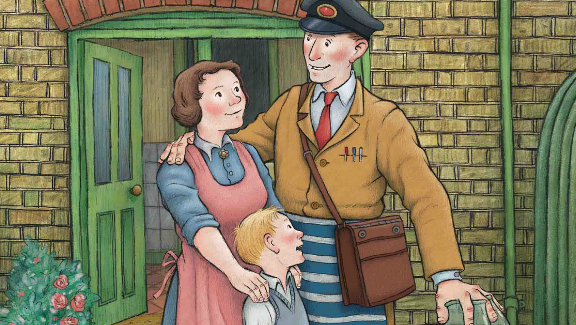 The story of Ethel & Ernest is endearingly unremarkable. As their son Raymond Briggs, the illustrator of the graphic novels this animation is based upon, mentions at the start – this is simply the story of his parents, and that’s the beauty of it. Just like yours or mine, every romance is full of surprises, highs and lows. Relatable, unexceptional, but tales that belong to us, that mean everything in our world – and this film lingers on that very notion.

Adapted by Roger Mainwood, we first meet Ernest (Jim Broadbent) as he cycles past housemaid Ethel (Brenda Blethyn) daily, only to one day muster up the courage to knock of her door and ask her out on a date. The pair begin courting, falling in love against the backdrop of a nation on the brink of conflict, as World War 2 gets underway. It’s around this time that their first, and only son Raymond (eventually voiced by Luke Treadaway) is born, who is raised partly in the countryside when evacuated from the city. In the meantime Ethel & Ernest continue to make ends meet, vying to survive the horrors of the ongoing war, and yet maintain a happy home.

Beginning as a live action endeavour, as we meet a now elderly Raymond, we then enter into the core narrative, and yet we never lose that personal touch from the opening scene. We meet one of the lead characters in this story, a character we grow to know so well – serving as a constant reminder that this tale is completely real, which maximises the emotional impact. That sense of realism is maintained throughout, particularly in how the lead characters are flawed, while their relationship is vitally imperfect, and yet their humanity makes them so likeable, as she’s blissfully pragmatic, while he’s infectiously optimistic.

There’s a congenial, indelible atmosphere to this piece, informed by the era depicted, as the crooning soundtrack makes up the backdrop. The context of the era is implemented so well too, as the politics is peppered into the narrative throughout, giving us a real feel for the time, also casting an eye over how the couple adapt to new technology (plus seeing a man walk on the moon), and the overall change in societal values, where the nation became more free-spirited, created by the baby boomers, chronicling it all through the prism of this one love affair.

So yes, the story of Ethel & Ernest is somewhat unremarkable, it’s one shadowed by millions of people at the same time, but it’s their story, and one we immerse ourselves in so greatly. The real accomplishment here is now having this beautiful affair immortalised through cinema. Love live Ethel & Ernest.