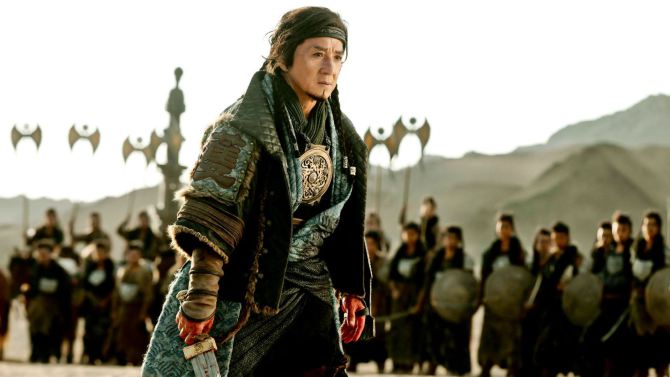 There is something remarkably kitsch and slapstick about Jackie Chan’s latest endeavour, the period adventure flick Dragon Blade. Combining martial arts with farcicality, this is what happens if Laurel and Hardy were to meet Bruce Lee. Though on this showing, it’s fair to say they don’t quite get along.

Based on real events, albeit somewhat loosely, our story takes place thousands of years ago, when the fight for the Silk Road intensifies between the East and the West. The essential trading district is the target for the tyrannical Roman leader Tiberius (Adrien Brody), though his mission to claim it as his own is one that Chan’s Huo An is fervently against, vying to protect his land, and the Chinese people. Teaming up with a Roman of his own – the General Lucius (John Cusack), the pair assemble a vast army of warriors, as a vastly significant, immense battle between the two sides looms ever closer.

When dealing with a picture of this nature, you certainly hope that at the very least you can rely on the action sequences to compensate for the overstated narrative and the overtly theatrical acting that inevitably transpires – but even the choreography within this endeavour is somewhat uninspiring and dull to watch, clumsy in its implementation. While the overriding message – the eventual sentiment of uniting the East and the West, to form a steady relationship and allowing it to prosper, may be a positive one, the execution of the narrative persistently undermines any such profundity, managing to be kitsch without ever realising it is. It’s hard to decide quite whether that’s endearing or detrimental.

This generic offering simply doesn’t transcend the tropes of the genre at hand, and while Brody’s Tiberius claims that he is “bored of being predictable”, it’s certainly not a notion that is in any way evident on this showing. Both he and Cusack have so little passion for the project, which comes horribly across in their half-hearted performances. They aren’t backed up or rescued by director Daniel Lee either, as the narrative structure and pacing of this piece is all over the place, as we move between scenes in such a clumsy and contrived fashion.