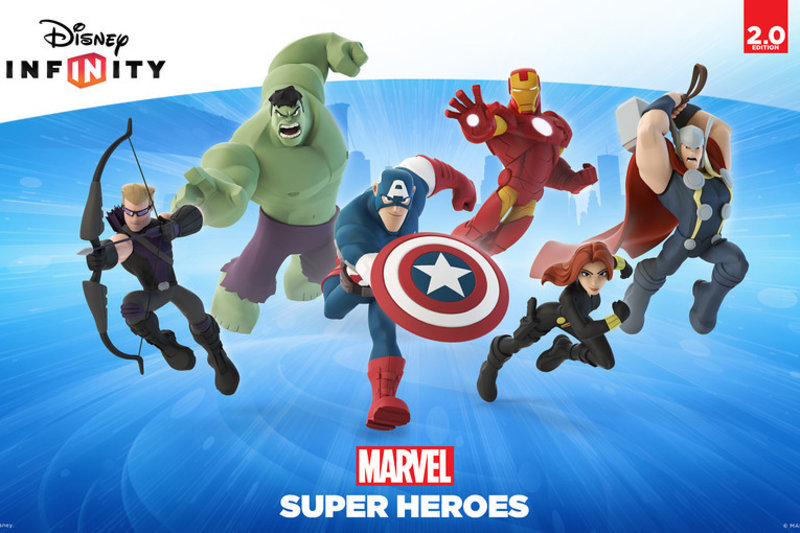 Disney Infinity is, perhaps, the biggest film related phenomenon most of us haven’t heard of. Their video-game, available on all the latest consoles, provides film tie-in adventures unlocked by purchasing physical toy figures and it’s massive.

Today Disney Infinity 2.0: Marvel Super Heroes launches across Europe (and on 23rd in the US). The starter pack (£52) provides The Avengers adventure and three toy figurines to unlock three characters. Purchasing more toys unlocks more characters to play in the game.

Once you have the starter pack you can also purchase Guardians of the Galaxy and Spider-Man play-set packs that provide adventures for those film franchises at around £30 a pop including two characters.

Although it may sound like an easy way to cash in on these film franchises and leverage a collectable toy line to maximise profits, see it in the hands of children and it starts to make more sense.

There is a happy back and forth between the video-game and carpet. Placing a toy figure on the Infinity Base peripheral makes the character appear instantly in the game. All progress and customisation players make is instantly saved back to the toy itself. This means that kids can take it to a friends house and instantly access “their guy” while playing away.

The toys themselves are also of high enough quality for kids to want to use them when the game is switched off. In fact many children will continue their gaming adventures under the dining room table or on the stairs, using the plastic figurines to trigger imaginative embellishments to the official narrative.

The final, and possibly most attractive, part of the offering is the toy-box game creator mode. This puts the develop controls in the hands of the player so they can create their own adventures. Through a series of simple interactions even really young players can construct race tracks, castles and dungeons each complete with game logic to make them fun to explore.

Sure it’s only a video-game, but for many children this is the equivalent of the summer blockbuster. This will be the first way lots of them encounter franchises, rather than through films. There’s no doubt this has caught on, but it will be interesting to see if it stands the test of time. With a Star Wars themed Disney Infinity game expected next year it looks to have a good few years in it at least.