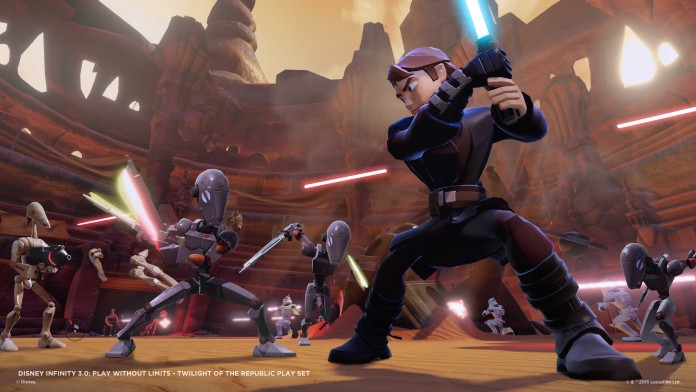 With the launch of Disney Infinity 3.0 families can start to get their hands on the first of the Star Wars content.

This begins with Twilight of the Republic for Episodes I-III, before the wider launch of Rise Against the Empire for Episodes IV-VI and will climax with The Force Awakens characters and adventures later in the year.

As you can see here the figures are as big a part of the experience as the on screen action. This year though, Disney Infinity lags behind the toy innovations of Skylanders racing cars and Lego Dimensions buildable smart mini-fiigures.

Getting started in the game involved tracking down Darth Bane who has started building a Droid army in a nearby factory. The game can be played in both single and split screen mode for co-op play.

From here Disney Infinity takes players to space. This new game-play for 3.0 adds space flight and shooting to the on-foot adventures and enables players to visit different planets in the Star Wars universe.

This culminates in a series of missions on the various planets that involve team-work and collaboration. Against the clock players bust chase down Darth Bane and disarm the bombs.

As you can see, first impressions of the game are strong. It will be interesting to see how it does at retail when Skylanders and LEGO Dimensions launch next month.