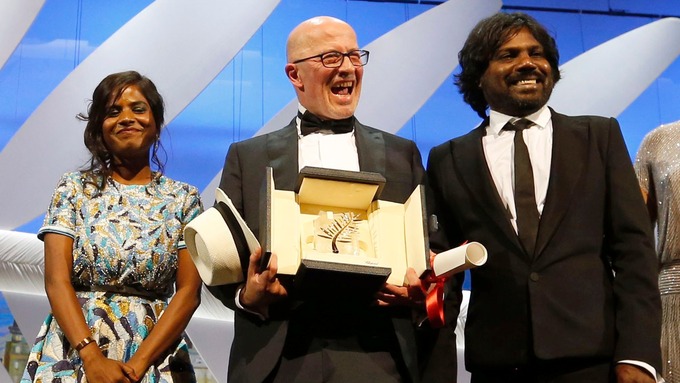 Picking one of these most prestigious awards there is to win in cinema – the top prize at Cannes Film Festival, the Palme d’Or, it was a pleasure to sit down with the auteur behind the project, Jacques Audiard.

The venerable filmmaker was sat besides his two leading stars, Kalieaswari Srinivasan and Jesuthasan Antonythasan – who discuss this indelible experience, while the latter discusses his past as a soldier, which isn’t too far removed from that of the title character he is embodying.

Neither of you had an awful amount of acting experience – how did you come to be involved in this movie, and would be keen on pursuing screen acting as a career from hereon?

Kalieaswari Srinivasan: I do theatre so acting is not totally a strange thing for me. I’ve been doing it for five years, but this is my first movie. I got into the movie through an audition, and from now on it is acting for me, whether that is theatre or movie, it’s acting for me.

Jesuthasan Antonythasan: I came into the movie through an audition as well. It was apparently it was the same person who put us both up for the audition. I would definitely continue acting if there is someone who can handle me and make me act.

So Jacques, tell us about your experience working with actors with such little experience on camera and getting the sort of performances you have?

Apparently you came up with this idea eight years ago…

Jacques Audiard: Yes, that is right.

Obviously now with the refugee crisis the film is very timely. Given it has taken eight years, it must be strange that it’s finally ready during a time when the themes of the movie are so pertinent?

Jacques Audiard: In a way the film is more interested in integration rather than immigration, it’s not a life or death situation like with people arriving on beaches. What I’m doing is giving a name, a body, a thought, to these anonymous people who have no names, no faces.

Is it important then to humanise immigrants and refugees at the moment – to help a lot people realise and understand the situation they are in?

Jacques Audiard: It’s not so much to humanise them, but to make them the hero. To put them in a cinema scree, to make them centre stage. Documentaries do the job of humanising, and cinema creates heroes.

There are multiple languages being spoken in the film – actors from Sri Lanka, a filmmaker from France, there’s English in there too. This is representative of your career Jacques, as you often deal with several nationalities, not just the French. Why is that?

Jacques Audiard: I’m bored of doing French films about French people, and it doesn’t reflect the reality of when I open the door and step out into the street. There are all these people from elsewhere and I’m interested in hearing other voices and seeing other faces.

Jesuthasan you were a soldier yourself of course, who eventually fled to France. Was this quite a cathartic, emotional experience for you? To go back and fictionalise your own past?

Jesuthasan Antonythasan: I was very emotional when I read the script and also when I saw the movie. But as for feeling emotions during shooting – I didn’t feel any, because of all the technicalities, I had to think about the camera, my concentration, look at my character, take the marks into consideration, there were so many other factors that were occupying my head I wasn’t emotional at that time, it was just work.

You’ve managed to make Kalieaswari laugh a few times already since I came in the room – which we obviously don’t get a sense for with your character in the movie.

Kalieaswari Srinivasan: He really is funny!

Well given all of the powerful, moving scenes – was there ever a time when you had to refrain from laughing?

Kalieaswari Srinivasan: No. He is very funny, but not in a distracting way. He’s very a very giving and receiving person that makes things very easy, especially for performers.

Lastly, huge congratulations to you all for the Palme d’Or – how much did that mean? It must be so thrilling, for everybody involved in this project, that you were recognised with such a prestigious award?

Jacques Audiard: It was very surprising. Without my leading three actors, the film wouldn’t exist. It was a team.

Dheepan is released on April 8th. You can read our review from Cannes here.