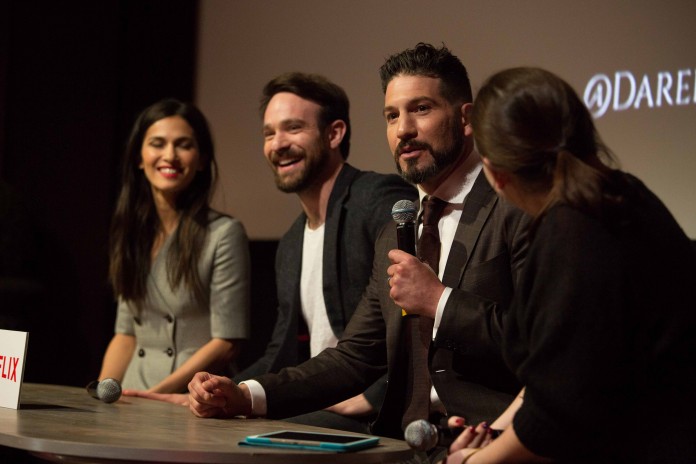 Earlier this week we were invited to Paris to watch the first two episodes of the new series of Daredevil, the smash hit comic book adaptation from Netflix.

Joining us would be none other than Matt Murdock himself, actor Charlie Cox and he would be bringing a few new ‘friends’ with him as well. After chatting to the stars beforehand, where Charlie told us how excited he was about what we were about to see, the British star who plays the title character took to the stage with Jon Bernthal and Elodie Yung to answer a few questions.

Bernthal takes on the iconic role of Frank Castle, better known to Marvel fans as The Punisher and he would tell us about his inspiration for the character we were about to see.

Finally we were introduced to Elodie Yung, a native Parisian, who will play another well-known MCU favourite in the form of Elektra.

As we already know, the second series of Daredevil is part of the bigger Netflix Marvel Universe, which will culminate in The Defenders, however we were told that this season of the show would focus on the thin line between right and wrong when Matt is faced with a vigilante who uses different methods.

Charlie began by telling us why people care about superheroes now more than ever.

“The other idea behind that is that superheroes speak to the kid in us. We remember being a little boy or a little girl and fantasising about having special powers and being able to use them as a force for good.”

Jon isn’t surprised that the shows are so popular internationally.

“We’re here for a Netflix show and they’re everywhere. The world is getting smaller and smaller and we’re all so better connected. I think that’s from the opposite side of what Charlie was saying with these global manifestations of evil and a danger that is ever threatening like Climate change and terrorism. It’s there. And so its natural to want something against that. We relate to the idea of evil and we see it all around us.”

So what are the difference for Matt Murdock this time around in season 2?

“I had to think about it as the first season was the birth of a hero, the evolution of Matt Murdock into Daredevil. This year is about the question of what makes a hero. What makes a heroic act. Is a vigilante helpful, or detrimental to society.

“Since the end of season one, Wilson Fisk is behind bars and the crime-rate has plummeted. He’s feeling pretty good about himself. And he’s dealing with his demons and he is really enjoying his work, doing it with a smile. There is an arrogance and a swagger, but then of course these two guys who up [points to Jon and Elodie].”

Jon was then asked about how he developed this character, the uncompromisingly brutal Frank Castle, and if it was based on any of the source material in particular.

“It was a great joy to acquaint myself with the source material in comic book stores around the country. The Punisher Max series by Garth Ennis is the one I responded to the most. There is nothing like comic book nerds because they are so passionate and smart and the best fans in the world. You find a true blue good comic nerd and they will steer you straight.

“I also acquainted myself with what they did last season. I’ve come onto a show that has existed and where the bar is set so high. My job was to not screw up. I dived into the scripts and got that rapport with the cast, the world and the writers. One of the great things about television is that you get that fluid rapport with the writers. They can see what you are doing and can change and you can see what they are doing and have a real dialogue which is unique to television.”

Elodie was asked how she connected with such an extreme character as Elektra.

“She is very complex. I didn’t know her before, so it was all new to me. I knew the show. It gave me a freedom to discover this whole universe and her personality. The process began during the auditions and had great scenes and material. There weren’t any clues who she was because it was secret. They then gave me more indication that she is not a nice girl. ‘Keep the nice girl in the closet…’

“Then when I found out it was Elektra I began to read the comics. My first one was Elektra Assassin, which was like art. It was complex and you can see she is psychologically layered. I did my homework to get inside who I think she is. As Jon said it was collaborative with the writers and between us too. We wanted to bring some of ourselves into the characters. Yes we make a show about superheroes, but it is grounded. They are more like people with human feelings.”

“When they were casting the character of Elektra, there was a point when there were four actresses left in the running. They asked me to come in and read with all four. We had just started filming with Jon, and I came in on my lunch break to meet with the four girls. Elodie came in and our reading was spectacular, she was clearly the strongest actor. Our boss, who is the head of Marvel Television, Jeph Loeb came and said ‘OK, this is great, this is very exciting. Is there anything else we should know about you?’ Elodie then said ‘Well I know karate, I’m a black belt’. Jeph then said ‘I don’t know what does that even mean?’ and she said ‘It means that I can kick your arse…’

And that’s why she got the part!”

So how did you go about preparing for the relationship between your characters that we will see in season 2 and that is highly anticipated?

“For the chemistry test, on the last round of auditions it’s really about that between the actors.” Elodie stated.

“It worked right away. It wasn’t a conscious process of getting to know one another but of trying things together on set. We found that relationship organically.”

Charlie added: “The Matt and Elektra story was beautifully written. I would venture to say that every single man I know, potentially in the world, has had a relationship with some sort of an Elektra. We’ve been in that place with some who is f**king wild, crazy and who you can’t get enough of. Some one who you love and hate at the same time and they drive you crazy and seem to be able to manipulate you with a look or a word. It’s a period in your life that your grateful for and that you are glad is over… so my preparation was basically just remembering my own twenties!

“I should add Elodie is not like that, but a great actress and plays the character just like that.”

How did the cast getting into playing these dark characters with multiple personalities.

“Its a complicated process,” Charlie replied how he approaches playing the blind crime-fighter.

“Over the course of the years there are so many comic books, you really have to focus on the scripts and who is Matt Murdock in the scripts. You have to understand the essence of how he thinks and his attitude to the world he lives.

“In terms of preparation, for me there are a number of things. The American accent. Blind. Martial Arts and finding the character. Walking with a cane. The hardest thing for me is when I act with the other actors but can’t look them in the eye. I have to look at their shoulders, that’s tricky.”

Charlie was then asked about his heroes growing up.

“My heroes were football players. One in particular would be Thierry Henry.

“A few years ago when I was on Boardwalk Empire a friend of mine from the show called me to come and have lunch with him and a friend of his. I thought it was strange because we weren’t that close, but he knew I was an Arsenal fan. In my job I’ve worked with some amazing actors and met Pacino and De Niro and I don’t get starstruck.

“So I walk into this restaurant and Thierry Henry AND Patrick Viera were sat there. I couldn’t move!”

Daredevil Season 2 will be available to stream on Netflix from March 18.

Jon Bernthal stars in trailer for ‘We Own This City’