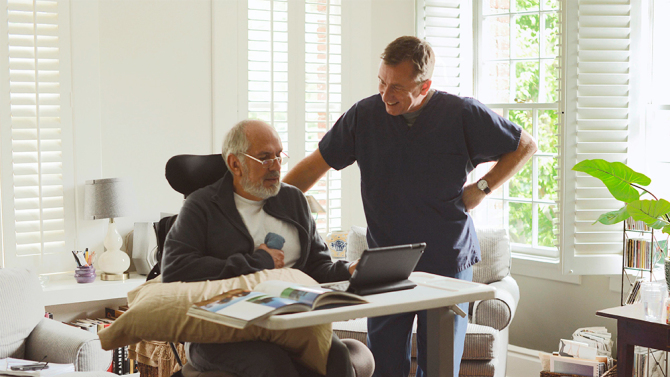 There’s an obligation for cinema, at times, to reflect reality. Working as something of an antidote to the blockbusters and fantastical productions that revel in surrealism – kitchen sink dramas have a valuable place, as the notion of playing our lives back to us comes with great appeal. However in the case of Michel Franco’s Chronic, you can’t help but question whether that’s the case. Not that we can pick and choose what we’re exposed to, and it’s only right that at times the more arduous, disquieting moments in life are presented to us on screen – but this is particularly tough. Many of us have had relatives who have died slow, undignified deaths, and this picture studiously scrutinises over that very notion, watching terminally ill patients as they approach their final breath – and it resonates in a painful, familiar way that makes for a distressing experience – to a point where you question if it’s even worth it.

We peer into the lives of those facing up to their mortality through the detached eyes of home care nurse David (Tim Roth). His relationships with his patients are inevitably short, moving swiftly on to the next after each passes away. In one instance, with stroke sufferer John (Michael Cristofer), he is accused of overstepping the mark, as it’s a role the diligent, assiduous carer takes seriously, to a point where the bereaved question his ethics. Franco takes a beat seat however, with a voyeuristic approach, as the camera just lingers on our protagonist from afar.

Though appreciating that in order to do this job David has to be detached and uninvolved, it makes for a somewhat cold experience. He can’t get emotionally entwined with his patients because otherwise he’d never be able to be a nurse – but his disengagement extends unwittingly to the viewer to a point where we don’t feel much for the terminally ill patients either. That’s not to say this isn’t a distinctively uncomfortable watch, as we’re capturing these people at their most vulnerable, epitomised in one of the early scenes, where we watch David shower the Aids sufferer Sarah (Rachel Pickup). Fragile, dying, she can’t even scrub her own body. Also the case when a later patient Marta (Robin Bartlett) has an accident and needs to be cleaned up, it’s a horrible, humiliating state we’ve seen loved one falls in to, and it’s what lays the foundations for this piece.

What sets this production apart, however, and ensures that it remains an absorbing watch is the nuanced performance by Roth. The actor should be commended, not only for this excellent turn, but for his inclination to take part in such an eclectic range of projects, not just playing it safe and waiting on the pay-check (let’s disregard the FIFA movie for a second). You can see the appeal in collaborating with Franco though, after the director’s preceding endeavour After Lucia was a big hit on the festival circuit. However as a follow-up this does feel somewhat underwhelming, and while there is so much to be admired about the filmmaking on show, it feels like all-too-easy territory, moving an audience by default given the subject matter being candidly explored.