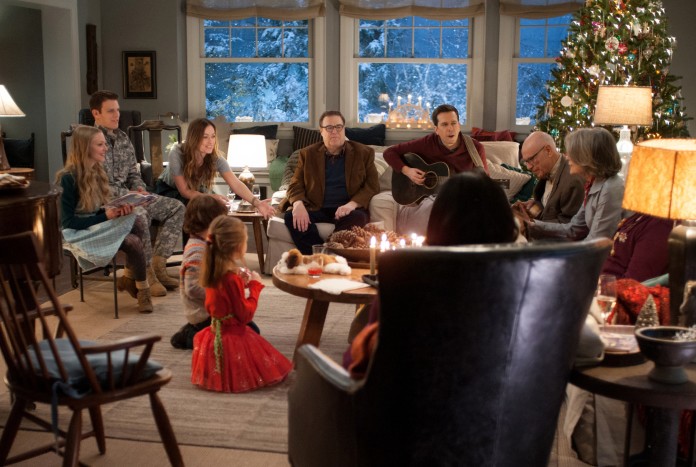 Jessie Nelson is something of an elusive presence in the film industry, having released just two films across the past two decades. While the Ray Liotta and Whoopi Goldberg starring Corrina , Corrina marked her debut back in 1994, she followed it up with the critically acclaimed, Oscar-nominated I am Sam in 2001. Now comes her third feature – and this time Nelson has turned her head to the festive season, with the uncynical, mawkish-to-the-point-of-being-bearable, ensemble comedy, Christmas with the Coopers.

The Coopers are spread across four generations, with Bucky (Alan Arkin) overseeing festivities, while harbouring a passionate affection for local waitress Ruby (Amanda Seyfried). He’s not the only one suffering romantically either, as his daughter Charlotte (Diane Keaton) and her husband Sam (John Goodman) are struggling with a marriage on the rocks, despite endeavouring to put on a brave face for the Christmas period. But it’s a sentiment shared amongst their offspring too, as the unemployed, soon-to-be-divorced Hank (Ed Helms) is not coping well, nor is his single sister, Eleanor (Olivia Wilde) who intends on persuading soldier Joe (Jake Lacy) to pretend to be her boyfriend when meeting her parents. Meanwhile Charlotte’s sister Emma (Marisa Tomei) is in trouble when caught shoplifting by Officer Williams (Anthony Mackie), while Hank’s eldest son Charlie (Timothée Chalamet) is hoping that this Christmas he’ll finally have the chance to tell Lauren (Molly Gordon) exactly how he feels about her.

As you may have already established, Christmas with the Coopers comes equipped with a convoluted narrative that weaves in and out of a myriad of stories, and suffers in the same way ensemble features tend to – as a film with a distinct lack of focus. Each individual plot point has a degree of intrigue attached, particular the dissipating marriage between Sam and Charlotte, and the oddly matched romance between Bucky and Ruby – but the viewer is never given the opportunity to pause and reflect. We’re too concerned with covering all bases, and ensuring that each respective storyline is conclusive, complete with a sense of clarity – but all that does is make for an emotionally disengaging experience, as we lose sight of the more nuanced, intimate elements.

Yet there remains something rather Christmassy about this endeavour, enhanced by Steve Martin’s narration, which, though contrived, adds to the enchantment. The music helps in that regard too, with the likes of Nina Simone and Bob Dylan included in the soundtrack – luckily, in the latter’s case, not from his recent Christmas album, but classics of old. It creates an atmosphere that is endearing, and in the right frame of mind can make for a congenial cinematic experience, albeit, at times an overtly sentimental one. You may laugh, you may even cry, and you’ll be sure to resent Nelson every step of the way, because she knows exactly what she’s doing. So get ready to be well and truly manipulated.

But for all of the characters on show, it still remains a mighty challenge to relate to any of them at all… Except their pet dog. But that’s mostly because he just takes a back seat and watches on, with a bemused expression on his face that is comparable only to ours.