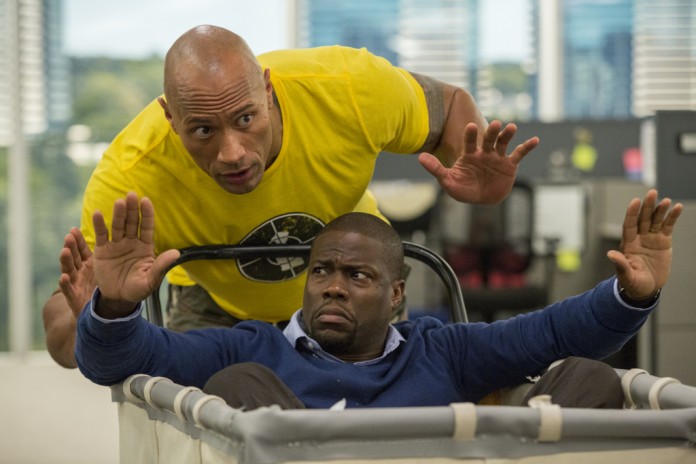 A buddy movie in essence, Central Intelligence switches the traditional straight man/comedy lead dynamic hoping that it will be enough to save a predictable script and some lame jokes. Sadly, not even Dwayne Johnson’s mighty effort can rescue this irritatingly unfunny summer flick.

Calvin Joyner (Kevin Hart) is a smart accountant who seemingly has it all. His job, however, doesn’t quite match up to the high-school dreams he once had. As a star athlete, Calvin thought he was destined for more. On the flip-side of the student days from the past  is Bob Stone (Dwayne Johnson). An overweight loser, Bob disappears after an assembly hall shaming only to resurface on Facebook and sends Calvin a friend request. The pair decide to meet up at a bar on the eve of a high school reunion and Calvin is stunned to see the new, improved Bob Stone. A hulking mass of muscle and irresistible charm… complete with a fanny pack.

Bob seems to think that he was close friends with Calvin, although in reality they barely knew one another. The only apparent link was when Calvin helped save Bob from bullies once. This one incident seems to have had a lasting effect of Bob, who it turns out now works for the C.I.A. Through a series of events, Bob and Calvin end up going on the run. A former partner’s murder being pinned on Bob mean that he is a wanted man, but the action and adventure that follow are just what Calvin has been craving… even if he doesn’t quite realise it yet.

One of the main problems with this film is the idea that Kevin Hart is struggling in life. His character has an attractive wife, a well paying job and is doing something he has a natural aptitude for. Sometimes he gets a little bored at work, but you know most people would kill to get what he already has.

The main premise of the film though, focuses on getting Hart even more. We are meant to root for him to get the thrills he is lacking at work so that he can literally have it all. Its the same in all his films. In Ride Along he has the same, preferential starting point and yet ends up with more. It’s impossible to root for him and cheer his success, he doesn’t deserve it. For an every man, his goals may be believable but the constant ease with which he gets them by the credits of his films is infuriating. This is also to assume you can tolerate his high-pitched shrieking and incessant twitching.

It’s arguably time to also question just what The Rock is thinking. He has escaped the initial derision that was to be expected for a wrestler-turned-actor, and scored commercial success, but his career has seriously plateaued. Where once we would await a film starring Dwayne Johnson with palpable excitement, we now approach with caution. He remains watchable, but for every middling action romp or mirthless blockbuster he puts out we lose a little more faith in the self-proclaimed Great One.

Central Intelligence wastes Johnson’s talent for drama and action. Sure he can do comedy, but there aren’t enough jokes to fill the trailer for the movie, let alone the movie itself.