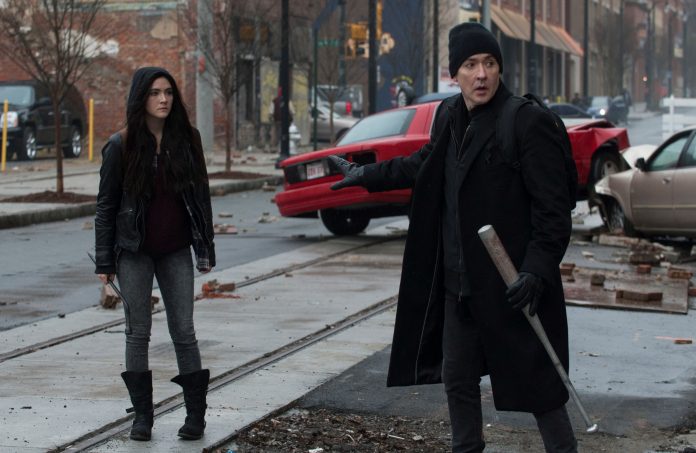 The zombie sub-genre has been done to death of late, as a common stomping ground for contemporary filmmakers, whether that be in blockbuster format with World War Z, or a comedically inclined approach such as Shaun of the Dead, or even a retelling of Shakespeare, as we saw in Warm Bodies. The latest endeavour is Tod Williams’s Cell, taking a relatively unique approach and steeping the narrative in pertinency based around our relationship, and reliance on technology – yet there is still nowhere near enough innovation to allow this somewhat generic feature to stand out from the crowd.

Clay Riddell (John Cusack) is at the airport, and is determined to find a means of charging his phone that will allow for him to speak to his young son. His efforts are in vain, and in turn, save his life, for a mysterious phone signal pulsates through all devices, murdering many, and sending survivors into a zombie-like state, aggressive creatures roaming the streets of America. Clay is one of very few unaffected, but is being hunted down by the bloodthirsty savages, and when he stumbles across train driver Tom (Samuel L. Jackson) the pair attempt to find safety. Meeting several normal humans along the way, they embark on a road trip to New England, as Clay vies desperately to be reunited with his son – with no way of knowing whether he’s safe, or if he’s one of ‘them’.

The film begins in an impressive fashion, as the opening sequence as the airport makes for immersive viewing, as the sounds, the atmosphere and hurried nature of those inhabiting the scene imbues the feeling of being at an airport. But then the phone signal occurs, and the film becomes gloriously absurd in a matter of seconds. Though this is crux of the narrative, it happens too swiftly into proceedings, disallowing the chance to establish a closer relationship with the character Clay, perhaps not thriving in the more naturalistic elements before the surrealism kicks in, which seeks only in harming our emotional investment in the protagonist’s cause.

Thankfully the two lead actors ensure that this somewhat mediocre screenplay is elevated by their presence, allowing for certain moments that are not particularly well-written to appear worthwhile given they’re involved. It’s a shame this be the case, as not only is the original story from the genius and creative mind of Stephen King, but the venerable author co-penned the screenplay too, so you can’t help but expect for more. That said, there is the occasional snarky one-liner which hits the right notes, though given they tend to be delivered by Jackson, it’s a struggle to determine whether it’s been well crafted, or if his idiosyncratic delivery just makes it seem like that’s the case. The man can quite literally say anything and have it sound ineffably cool. “I’ve had it with these motherfuckin’ snakes on this motherfuckin’ plane”. See?

There is a subtle point to this film though, perhaps scrutinising over our dependability on modern technology, but the film is a little too irreverent that it cheapens and undermines the message at hand, and it becomes a struggle to abide by any sense of realism when presented in such an absurd manner. Though in defence of Williams, realism is hardly what he’s going for with this particular endeavour.

Samuel L. Jackson and Hugh Grant star in trailer for ‘Death to 2020’