Home Reviews Born to Be Bl... 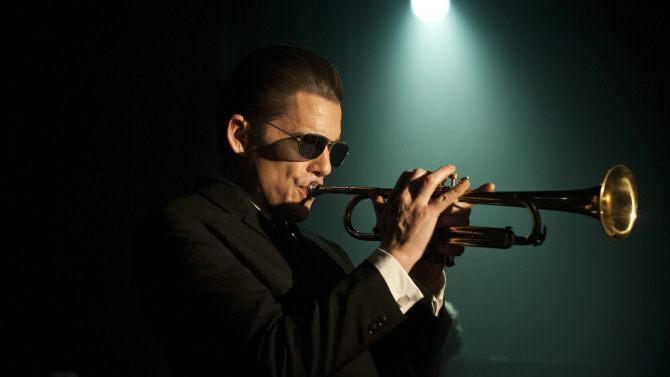 “Who’s better, me or Miles Davis?” asks jazz musician Chet Baker, portrayed with a stunning conviction and fervour by the ever-proficient Ethan Hawke. While that’s a purely objective debate, there’s a somewhat more one-sided argument when it comes to the biopics on both respective subjects, as while an accomplished piece, this Robert Budreau endeavour struggles to compel in quite the same way that Miles Ahead recently managed.

Having spent time in prison on drug charges, the revered, volatile artist that was Chet Baker was awarded a second chance in life, given bail to be the subject of a biopic, where he was set to play himself. The project came to an abrupt end when he was beaten up outside a club due to a debt, though he did take one thing away with him; his co-star Jane (Carmen Ejogo), as the pair enter into a tumultuous, passionate relationship. Jane had been portraying the subject’s ex-wife Elaine in the movie, and seems to be suffering the same fate as her character, struggling to remain in love with a man with such an unhealthy affliction for heroin. So she persuades him to stage a musical comeback, with more than just his career on the line.

Budreau has presented this narrative in a resourceful, creative manner, and rather than implement flashbacks into Baker’s past, instead we see them played out in the biopic he was at one point attached to. It’s through these meta sequences we explore his past, while it provides a vital, if somewhat unsubtle parallel between both Elaine and Jane, with the Ejogo effectively portraying both roles.

You do struggle to comprehend quite why Jane remains so loyal by Baker’s side, and while this honest depiction of the late musician is imperative in creating an authentic biopic, at the same time his flaws and reprehensible actions make it a challenge to fathom quite why he is deserving of so many second chances. She’s beautiful and talented and clever and he takes that for granted – and while based on a real life set of events, we could do with seeing more of the romantic elements of their relationship to fully understand why she sticks by him through thick and thin, for they must’ve existed.

But that takes little away from Hawke’s striking lead performance, portraying Baker with an imperative sense of volatility which is emblematic of an addict, always on the brink of combustion. Yet he does so with a certain subtlety, never playing the role like a caricature of an addict, which can be where actors fall short. Hawke’s performance is indicative of a feature that thrives in the notion of spontaneity and unpredictability, which is reflective of the subject’s improvisational style, and what ensures this feature remains a fitting tribute to his legacy.

Born to Be Blue will be showing exclusively at VUE cinemas on July 25th.

Exclusive: Director Fernando Meirelles and more on The Two Popes and the titanic two-hander of Anthony Hopkins and Jonathan Pryce