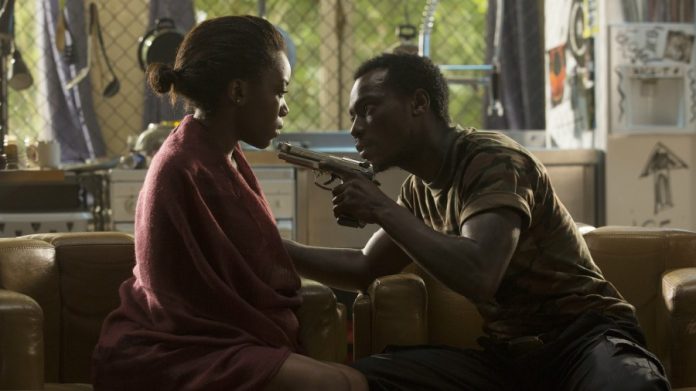 The cinematically unexplored mean streets of Brussels is the setting for this tale of star-crossed lovers whose union exacerbates the already fraught relationship between two warring gangs. An adaptation of two popular YA novels from prolific Flemish author Dirk Bracke, Black is the robust and confident second feature from Belgium filmmakers Adil El Arbi and Bilall Fallah. The duo have conspired (and largely succeeded) in making an uncompromising look at posturing teens emotionally unequipped with the adult world, reminiscent of genre standouts like Kids and City of God, complete with a heavy pinch of social unrest and interracial conflict which calls to mind La Haine.

Giving the subject matter and narrative angle, it’s a story which could have so easily descended into a myriad of tired urban clichés but the directors keep things fresh and engaging, aided by some outstanding work from their DP Robrecht Heyvaert who brings an unwavering dynamism to proceedings, yet isn’t afraid to dial things down in the more sombre and reflective second half. By casting non-actors to portray the street kids, the filmmakers are also able to imbue their work with a surprising authenticity and emotional heft.

Street punk and Moroccan migrant Marwan (Aboubakr Bensaihi) is only concerned with running riot and clashing with rival gangs until he unexpectedly finds romance with a girl from the wrong side of the tracks. Mavela (Martha Canga Antonio), the object of his affections, has recently become affiliated with the repugnant and sociopathic Black Bronx crew – a deeply misogynist and callous bunch (they innocently celebrate backstage with a popular singer before coolly shaking him down for protection money before he leaves to perform) who also happen to have a fierce rivalry with Marwan’s posse.

The two main protagonists hardly endear themselves to the audience. Marwan is a petty and remorseless thief (we’re first introduced to him as he snatches the purse from a car he vandalises) while the easily-led Marwan finds herself complicit in the horrific entrapment of a rival female gang member. It’s only getting together and discovering their capacity to love that El Arbi and Fallah find a way in for the viewer. The young lovers realise there’s more to the world than the one they’re caught up in, and conspire to sever all ties with acquaintances and family (Marwan’s imprisoned gang leader also happens to be his older brother).

It’s from there that the Romeo and Juliet comparisons, which seem a little lazy initially, begin to resonant as things take a decidedly darker turn and the kinetic energy of the first half is sucked out of the film in the same way a deeply chilling incident drains the vigour and life out of one of the central characters. This is exemplified in a striking montage scored to a downbeat cover (if such a thing was possible) of Amy Winehouse’s ode to romantic ruin, Back to Black. It’s a shame the film can’t quite end on a high when the slightly contrived and overwrought finale rolls around, but this is a minor blip on an otherwise very impressive and honest piece of work which should be required viewing for the very demographic it depicts.