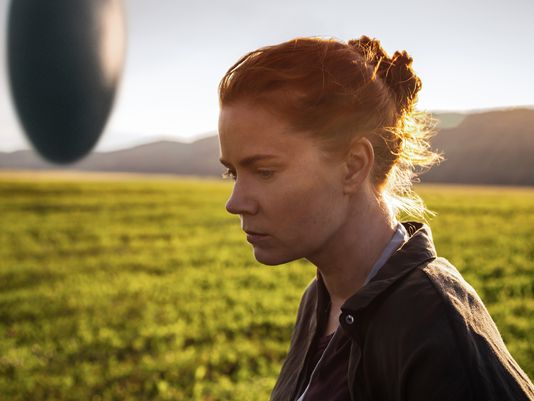 When dealing with the science fiction genre, it’s imperative we can connect with the material and resonate with the characters on a human level, to ensure that when the surrealism kicks in we’re fully on board and willing to go wherever the filmmaker plans to take us. So with Denis Villeneuve’s Arrival, the opening montage, where we meet Amy Adams’ Louise Banks, and watch as she raises a daughter, only to lay her to rest following an illness in her teenage years (sharing similarities to Pixar’s Up, in that regard) – instantly we’re on board, invested emotionally into the project and the protagonist – setting us up nicely for what’s in store.

Louise Banks is an expert linguist who becomes embroiled in a monumental event, given her aptitude for understanding communication. A series of spaceships have landed in several locations across the globe – evidently from another planet, mankind is now tasked with understanding their new visitors and deciphering exactly what they’re after. China are impatient, as are Russia, but America are desperate for more time before attempting to attack the unidentified objects, and Colonel Weber (Forest Whitaker) enlists Louise and scientist Ian Donnelly (Jeremy Renner) to meet the extraterrestrial beings and help comprehend their intentions. With a global war on the horizon, as people struggle to come to terms with this unexplainable series of events, pressure is on this elite team to act fast.

The opening montage is such an essential introduction to this narrative, for it creates an empathy for Louise, while conversely giving the character a fearlessness of sorts, a nothing-to-lose attitude that derives from the fact she’s already been through the very worst thing imaginable; losing a child. What also helps matters tremendously is having someone so subtle and nuanced like Adams in the lead, with such a warmth to her demeanour that ensures we care so much for her well-being. Losing a child works as a key narrative device in this tale too, for she has many flashbacks to her experiences raising a daughter, as that maternal instinct, and the ability to teach the world to what is effectively a blank canvas, are skills that she brings to the workplace, using these memories to help her cause when conversing with the two aliens (affectionately nicknamed Elvis and Costello).

Villeneuve has crafted a tale, alongside writer Eric Heisserer, which thrives in the notion of simplicity, and yet as complexity kicks in and we reach a point towards the end where it’s time to make sense of it all, it’s still easy to comprehend. Having Whitaker’s Weber representing the viewer helps in that regard, for he, like us, is not quite sure how everything works, asking the questions we want the answers to. In the latter stages of the film our experience is enriched also by the intensity that derives from the forthcoming war, with China on the verge of attack. Through this we explore humanity’s flaws, our own fears and impatience, in a way that is scarily realistic.

Villeneuve must also be commended for showing us the ‘thing’ and yet not having it be detrimental to the film. If you take Signs, starring Mel Gibson, it was a perfectly compelling horror movie until we see the poorly crafted aliens that looked like the sort Matt Stone and Trey Parker would draw – but in this title they’ve been designed in a way that allows for us to remain absorbed, and involved. One thing that you do take away from this title too, is that if aliens did come down to Earth, it would be a wise decision to let Amy Adams be the very first human being they meet. Always wise to make a good first impression, after all.

“Who shot Biggie Smalls?’ Forest Whitaker and Johnny Depp star in trailer for ‘City of Lies’