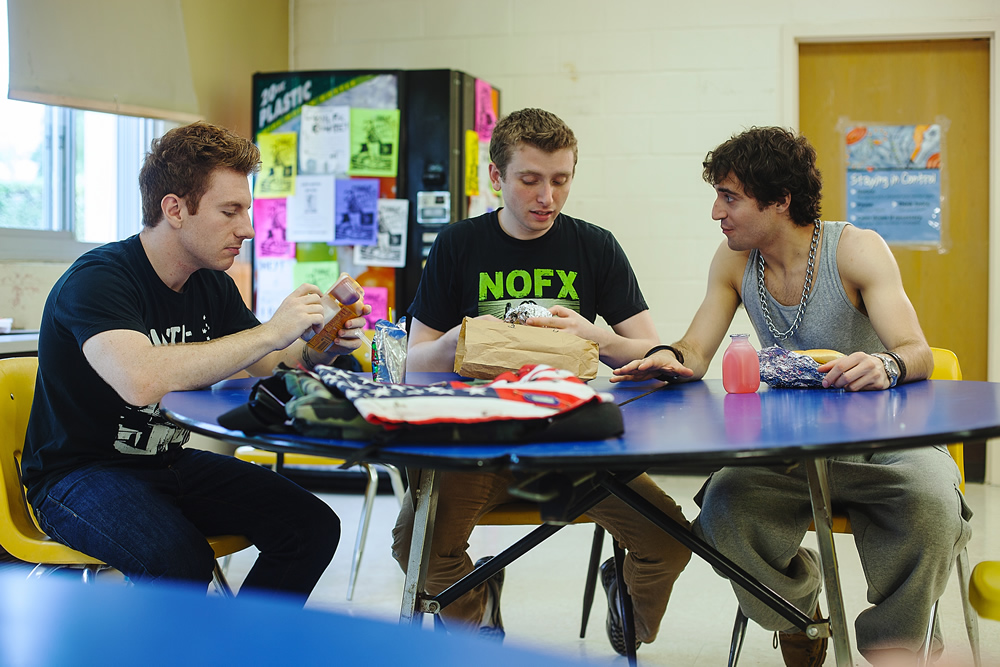 High school students Roy Offerman (Chris Bellant) and Larry DiMarco (Aberdeen’s own Craig Kelly) are in the market for a drummer. After auditioning a number of classmates they settle on Mike Peterson (Costa Nicholas), whose proficiency at percussion just about makes up for the fact that he is currently repeating the year for the third time. As their band, Witness My Jehovah, prepare for their first supporting gig, Roy meets a girl called Samantha (Allyson Reilly) and enters into his first proper relationship, to the eventual relief — initially disbelief — of his mum (Lori Hamilton) and dad (John Thomas Cramer).

As Roy and Larry arrive at school, spit-balling crude and often puerile names for their nascent punk rock band, it’s a real effort just to invest in the story that’s threatening to unfold. Bellant and Kelly are clearly in their twenties, making their characters’ digs at Mike Peterson’s age misguided and often painfully unfunny. Similarly unimaginative gags at the expense of their band’s name (misremembered throughout, as convention dictates) and mindless attempts at bromance and banter all fall equally flat, while their output ranges from basically unintelligible to borderline intolerable.

Luckily, we — like Roy — are soon saved from Larry’s parents’ basement and the band’s interminable jamming sessions by Samantha. Roy, you see, has the hemorrhoids, to the endless amusement of his peers and the befuddlement of his parents. It’s a surprising development — not something you’re used to seeing in an American “teen” movie — and makes the film immediately more interesting, not least because it is at the health clinic following a painful probing that he meets Samantha. She recognises a band from the T-shirt he’s wearing and they hit it off, quickly establishing that they have more in common than matching anal issues. Even Roy’s songwriting ability seems to benefit from her arrival on the scene.

Writer-director Ryan O’Leary — who attended the European premiere in Aberdeen at the weekend — clearly has an eye for observational comedy, and though not always in evidence during the band’s scenes together his instinct often serves him well elsewhere. The family dynamic he creates between Roy and parents David and Debra is not only hugely entertaining but also strangely insightful. Highlights include Debra innocently unpeeling the pages of a magazine rescued from her son’s bedroom, Roy donning a self-soiled sock the morning after the night before and David all but recoiling when talk turns to his son’s private life. Chris Bellant is positively fearless in the leading role, and it’s this unexpected emotional honesty that makes him so captivating, if not necessary likeable.

Although their courtship raises a fair few smiles in the beginning, particularly after Roy botches his and Samantha’s first kiss before retreating to his room to practice on his hand, their initial sweetness for one another soon sours. The tears start to show around the time Roy has sex using an out-of-date condom, leading to a pregnancy scare that shows just how insensitive he is under pressure. He’s insecure, over-protective and a bit of an arse, and having warmed to him during the second act you can’t help but feel to some extent betrayed. What counts, however, is that it provokes any reaction at all — not an outcome you could easily have predicted from the opening scene, with its televisual titles sequence and music video aesthetic.

There are some big laughs in The Backseat, almost all of them at the expense of Bellant’s Roy Offerman, but not quite enough to compensate for the deficiencies elsewhere. O’Leary, who, amazingly, has admitted to a certain level of autobiography in his writing (Blink 182 references and old-fashioned phones hint at a 90s setting, but it’s hard to be sure), is to be commended for his uncompromising — and yet, paradoxically, potentially quite compromising — portrayal of adolescence, though his successes are sadly tempered by a trite musical sub-plot that is nowhere near as creative, or compelling.