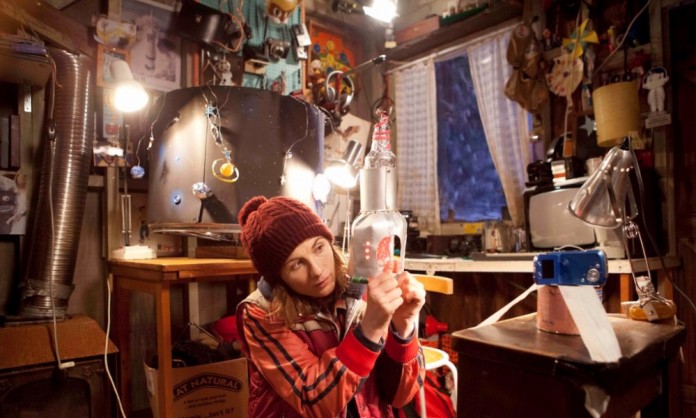 The “approaching 30” demographic have been blessed with some relevant and distinctly relatable productions of late, studying that volatile age group whereby you’re caught between your youth and adulthood, fully aware it’s time to grow up, but not quite willing to let go. Whether it be Frances Ha, Say When or Obvious Child, we’ve seen these themes explored on the silver screen – but seldom seen from a British perspective.

Thankfully Rachel Tunnard is on hand to fill this void, with her debut endeavour Adult Life Skills. Our entry point within this intimate character study is Anna (Jodie Whittaker), a recluse who lives like a hermit at the foot of her mother’s (Lorraine Ashbourne) garden, in the family shed. Spending the majority of her time making videos with her thumbs, she is given an ultimatum, whereby she must move out and grow up, as they search for a new apartment for her through the local estate agent Brendan (Brett Goldstein), who takes a liking to Anna. But she fails to respond, caught up in her own cloud of discontent, struggling to come to terms with the fact her birthday is approaching; for it’s not just her birthday that day, as her twin brother also would’ve turned 30 too, had he still been alive.

When dealing with a production of this nature, casting a candid eye over the life of one individual, and a certainly flawed one at that, in order for the film to be deemed a success it’s imperative we root for the protagonist’s cause, and with Whittaker in the starring role, that much is a given, such is her affability as an actress, making for a truly endearing creation. The film matches the character’s sensibilities, for it’s undoubtedly an imperfect endeavour, but a charming one all the same.

Needless to say there is a contrived whimsicality injected into proceedings that is detrimental to our enjoyment, but Adult Life Skills is enriched, consistently, by the notion of grief, a prevalent, if rarely talked about theme, as we learn that Anna is still struggling to overcome the death of her brother. Is she still a twin when her twin has passed away? This is a question that lingers over her, eating her up inside. The emotional core is more evident in her tempestuous relationship with her mother too, grounding the tale and adding a sense of poignancy to counteract the more undemanding side to this picture.

The narrative is somewhat predictable however, and when the predictable moments occur they do so without a palpable reason, as we deal with a rushed finale of sorts, when everything comes to a head. But when scrutinising over skills us adults are expected to have, whether it’s sending back a meal at a restaurant, or sewing, like Brendan suggests, making an accomplished movie is not a bad one to cross off the list, and Tunnard is more than worthy of claiming her own badge for this gratifying effort.