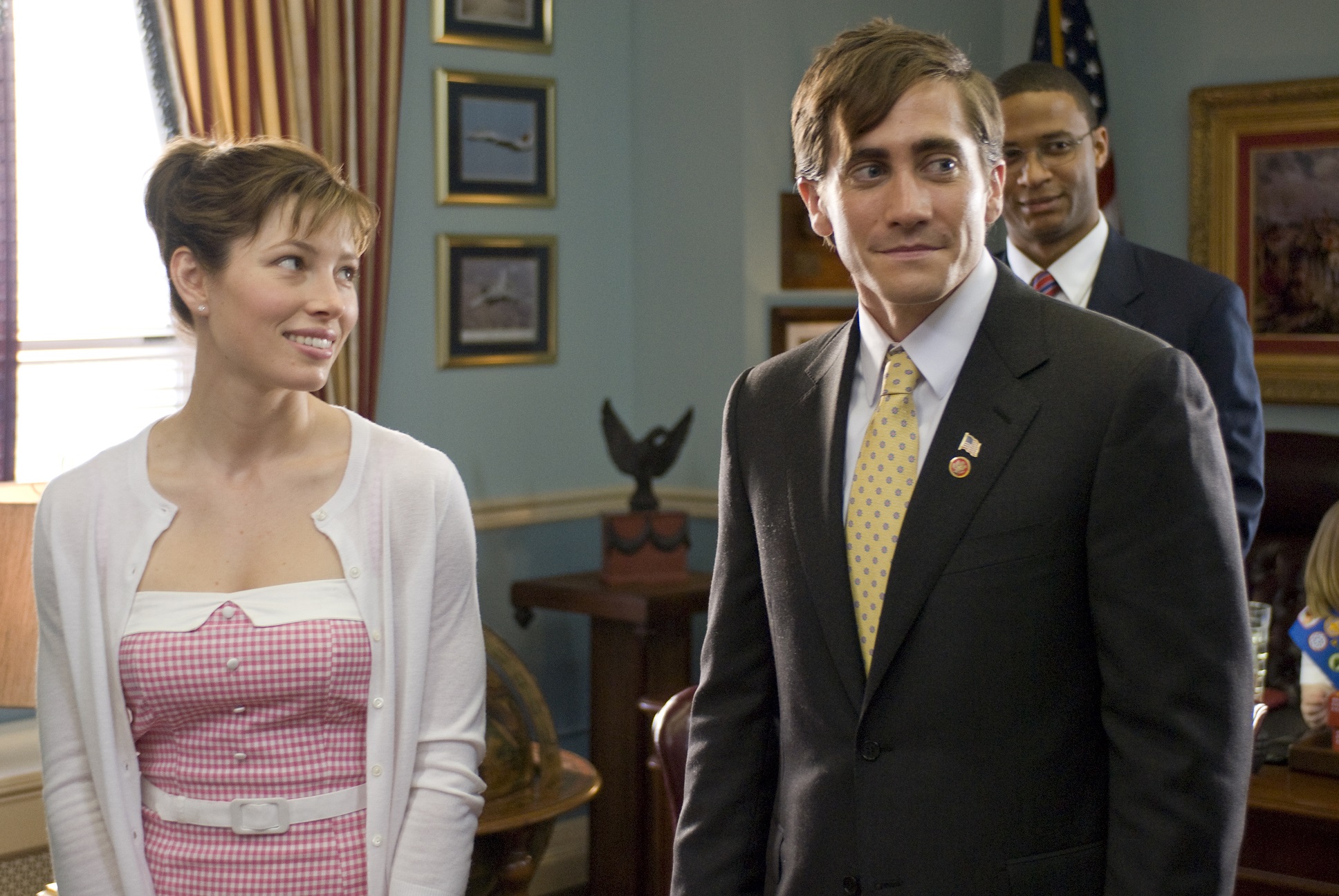 This weekend a haunting visitation from movies past exposes Jake Gyllenhaal in full flesh-crawling creeper mode, long before his critically acclaimed turn as Nightcrawler Lou Bloom. Gyllenhaal ingeniously infuses Accidental Love’s clueless congressman, Howard Birdwell, with an horrific predatory smarm which smears silvery trails of distaste in his wake. His every sexist, racist, uttering strengthening the undercurrent of unease until one bodily shudders to see him onscreen.

Unfortunately Accidental Love is a ‘wacky rom com’. And Howard the love interest. If it is possible to be remotely romantically interesting amidst a story which so blatantly yearns for the filmmaking days of yore, when Leslie Nielsen  was king and political correctness knew its place. When we tell you that this project was originally entitled Nailed you could probably infer everything you need to. Nevertheless, for the sake of form…

Alice (Jessica Biel) is a small town girl. A roller-skating waitress, with a penchant for ponytails and cute vintage dresses, just counting the days until her trooper boyfriend pops the big question. Scott (James Marsden) is the mustachio’d man of the hour – belittling, cocksure and brand-aware – what more could a one dimensional gal ask? And super smiley Alice gets her wish when Scott brandishes his ring box and intentions at the town’s fanciest Italian restaurant.

But Alice’s happy ending is cruelly blasted away by a stray nail-gun shot burrowed deep into her naive little brain, removing her inhibitions and exposing her to the sobering realities of life under an imperfect healthcare system. Exposing too the limitations of her one true love. Failing to fundraise the sum she needs to remove the nail, and return to her old life, Alice embarks on a dramatic new quest – for urgent healthcare reform and immediate sexual gratification. Fortunately Washington DC can ably accommodate all her needs.

American Hustle’s David O. Russell began production on Accidental Love in 2008 . The script, co-written with Kristen Gore, bears many of his hallmarks yet the film does not carry his name. He disowned the floundering project in 2010, after myriad financial woes ran it aground. From the wreckage, producer Kia Jam has salvaged a slapdash scrapbook of footage, had it edited with scant regard for rhythm or story arc, buoyed it with an inappropriately jaunty soundtrack, added a fictional director (Stephen Greeene) and ill-advisedly launched the thing.

Even Catherine Keener and James Brolin, in supporting roles with real satirical potential, cannot redeem this unpleasant feature. Keener’s former astronaut Pam Hendrickson is a house representative championing a bill to put a military base on the moon. Howard, seizing a chance to redeem himself with Alice, clumsily intertwines Alice’s reform aspirations with Pam’s campaign. Predictably the bewildered waitress and her unlucky entourage are puréed by the political machine yet any opportunity for sharp toothed wit is sadly squandered.

Something in Jessica Biel’s manner, in very early scenes, recalls Neil LaBute’s glorious Nurse Betty, suggesting the soul of a very different movie may lie (far) beneath. If you are compelled, by loved ones or sunstroke, to see Accidental Love this summer we would recommend that you use Nurse Betty as your go to happy place whenever the going gets tough. Whenever Tracy Morgan is on screen talking about his prolapsed anus, for example. Or Alice calls herself a slut. Or Howard calls Morgan’s character Kanye. Again.

Accidental Love is a ghost ship. A disembodied collection of performances, punchlines, reaction shots and imperfect sound, towed into 2015 and carelessly reanimated. The finished product – an ugly amalgam of puerile humour and lazy stereotyping – does credit to no one. If we could award fewer stars we would. As we cannot, we fling three imaginary throwing stars at Accidental Love instead. One for the Keyshawn/Kanye confusion. One for “Oh my god, I’m a dirty little nail slut!”. And one for Howard calling Alice a whore.