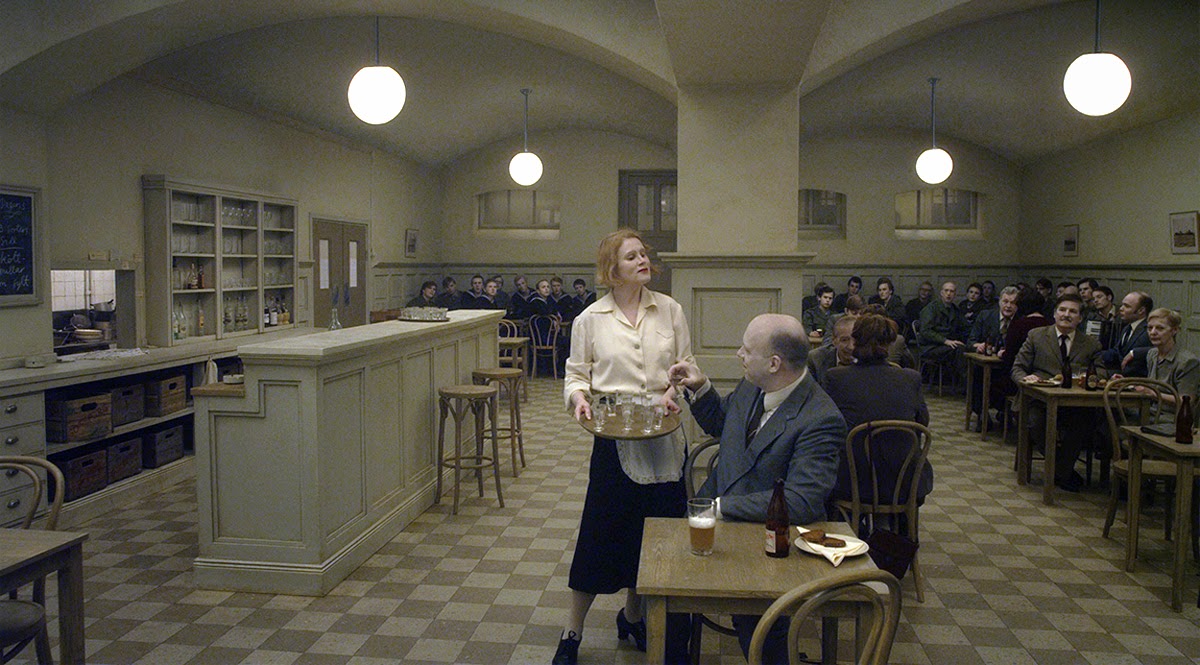 The Venice festival has welcomed back some veteran filmmakers onto the Lido, with Levinson and Bogdanovich both making appearances. In competition, Roy Andersson arrives after a hiatus with his whimsically titled film and, whilst not a masterpiece, it is certainly one of the section’s most visually interesting films.

It opens in a natural history museum where an elderly man is examining stuffed birds. Here is the titular pigeon, sitting on its branch. Everything about the scene – and virtually each subsequent one – has been bleached of colour, all life sucked from the screen. We see the dead birds, but also the skeleton of a T-rex, its grinning skull apparently viewing the powder-faced man as its next victim.

From here we move onto three stories about death, each of them full of humour before moving on to the rest of the film, which is more a series of interconnected vignettes lacking a particular narrative structure. Andersson says he thinks there are too many story-telling movies without visual qualities: in this film we have a movie of immense visual quality but perhaps too little story telling. The two characters who turn up most frequently are Jonathan (Holger Andersson) and his fellow sales rep Sam (Nils Westblom). These two pasty-faced figures sell laughter in the guise of vampire teeth, laughter bags and a hideous mask depicting a Swedish folklore character. We follow their travails as they end up bickering and penniless in a homeless shelter.

There are also historical scenes. We are in a basement bar in the present, laughing at the deaf old guy who’s been a regular for sixty years before heading back to the bar in 1943, seeing his much younger self, while Limping Lotta, the bar owner, accepts kisses from soldiers and sailors in lieu of payment for a drink. It is a scene full of warmth and humanity; Andersson’s favourite scene, he declares it shows how inventive humans can be.

A real historical figure in the film is Charles XII, noted for his love of all things bellicose and a repugnance for civilian life. He makes his appearance in a brilliant and surreal scene that opens in a contemporary Swedish bar, with a couple kissing in the corner, a guy playing a one-armed bandit and a handful of regulars. In gallops a soldier on horseback who gets the women out of the bar before the king makes his big entry. Referring to Charles XII’s homosexuality, the lad behind the bar is conscripted (“you can share the king’s tent”) and never seen again.

There is almost always something more going on in the scene than is immediately apparent. We often have to keep an eye on other events unfolding through a window or in the background, with characters such as the enamoured flamenco dancer making a secondary appearance. Andersson’s film seems to be about people repeating mistakes and it shows the consistency of human nature throughout the ages. Despite the deathly pall over everything, Andersson’s film is a warm and funny flight of fancy.