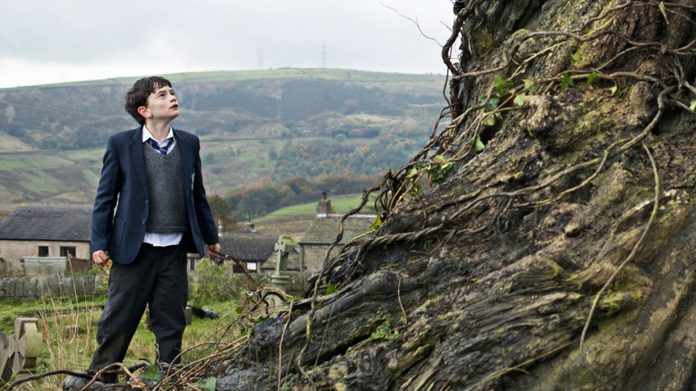 The last time we saw a film about a young boy trying to make sense of a difficult situation concerning his mother’s delicate health, he befriended Hugh Grant in About a Boy. In the case of J.A. Bayona’s A Monster Calls, our protagonist instead finds solace in a tree monster, and one that features the indelible, dulcet tones of Liam Neeson. What transpires is a film that is likely to have you in tears pretty much the entire way through.

Lewis MacDougall plays Connor, a resentful and perplexed youngster, navigating his way around the tricky situation concerning his mother’s (Felicity Jones) illness and rapidly declining health, having to put up with his traditionalist Grandma (Sigourney Weaver) and the bullies at school. His father (Toby Kebbell) has returned back to the UK from LA to lend a hand, but the paternal influence, and advice that Connor seeks, comes from a rather more intriguing place, for the every night at seven minutes past midnight, the tree monster arrives – with a set of ambiguous stories to tell, but most importantly, one it wants to hear, hoping that Connor can face up to his demons and do the one thing that is harder than anything else; tell the truth.

A Monster Calls thrives in a similar capacity to the likes of the recently released The BFG and Pete’s Dragon in how we examine the kinship between a child and a supposedly scary creature that adults simply wouldn’t understand – except this film represents a far more nuanced, emotionally gripping endeavour, as we enter into the mind of a kid who is vying to make sense of one of the hardest situations of all; the forthcoming loss of a parent. Connor uses the monster as a coping mechanism, but the feature works because anyone can resonate with this challenging scenario. Adults have no way of knowing how to cope with the death of a loved one either, we too struggle to come to terms with grief of this nature, never truly able to get over it, but simply learning how to live with it – and so Connor’s means of closure are about as good as anything we could create, if not better.

We completely embody the protagonist and adopt his blissful perspective; a viewpoint that simplifies a situation like this, where naivety at times can provide comfort. This sentiment is enhanced by the very fact his parents don’t even have names, we merely know them as Mum and Dad. MacDougall turns in a staggeringly impressive display in the lead role, portraying so many stages of this whole process so effortlessly; the anger, the sadness, the hope. He’s the star but Neeson must be commended also, and considering he’s been crafted as a rather menacing looking tree monster, there’s a certain warmth to this vocals, a comfortability of sorts from his distinctive, recognisable voice. The CGI is impressive too, as are the animated interludes to illustrate the tales the monster tells to Connor – adding such a vibrancy and unique aesthetic to a film that is so immensely engaging on an emotional front, ensuring this inspires all of our senses.

The emotion evoked is done so from both sides too, epitomised in how the original idea for this story came from Siobhan Dowd, a terminally ill cancer patient who sadly passed away before witnessing this worthy re-imagining of her resourceful narrative. For it’s not just Connor’s side we empathise with, but his mother’s too, as she cannot bear the idea of leaving her son in a world she’ll no longer be a part of, unable to guide him, or watch him grow old. Either way, from whichever side you relate to more, A Monster Calls is going to hit you, and it’s going to hit you hard – but my word it’s rewarding.