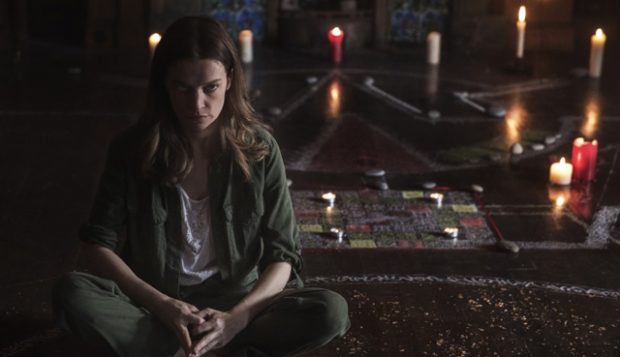 Every year on the festival circuit, one or two strange little titles seem to seep through the woodwork and make a real dent amongst all the big names and awards-hungry dramas. There’s a whole bunch of home-grown, British talents already making a name for themselves at this year’s LFF, but one of the most unique is certainly newbie Liam Gavin.

His feature debut, A Dark Song is somewhere in-between an ultra-involving parental drama, a 60s-style occult horror and an out-and-out black comedy, balancing the trio surprisingly well and delivering a thoroughly entertaining and refreshing new slice of British cult cinema.

It’s a relatively basic set-up: a young woman (Susan Loughnane), still emotionally scarred from the loss of her child, hires an ever-so-slightly dodgy supernatural expert (Sightseers’ Steve Oram) to help her perform a potentially dangerous ritual, but it’s a plot which is teaming with big ideas and fantastic concepts.

For example, Gavin is always careful, particularly in the opening act, to reveal things gradually. There’s no spoon-feeding or waves of exposition. It’s quite a bit of work to follow the ins-and-outs of the ritual itself, and specifically why these leads are so determined to chase it, but once everything is out on the table, it feels so much more organic and well-structured. The central duo (practically the only characters in the entire film) come across as beautifully rounded and detailed as a result, cementing the real importance of patience in storytelling.

This isn’t to call A Dark Song ever boring though. Oram is a fantastically arrogant presence, with a lot of humour and genuine darkness behind him that makes for a tantalising watch. He’s easy to dislike, but always understandable in his actions, whilst Loughnane is slightly more transparent in her own. Again, this is anything but a criticism; she works terrifically in the film and acts as a simple, but effective audience conduit, completely different to Oram’s more boisterous turn.

Sadly it’s not quite all peaches and cream for Gavin’s first effort though. Whilst the film’s first half ticks along at a beautifully steady pace with just enough reveals to keep things interesting, it shudders into a much lower gear later on, meandering for quite a while before delivering a frustratingly in-your-face finale that doesn’t quite fit with all that’s come before it.

A major part of what makes A Dark Song so inviting early on is not just its bleak comedy but it’s commitment to not giving the game away. For a long, long time Gavin walks a very delicate line between embracing the fantasy elements and questioning them. Yet, as the conclusion draws near, he seems to drift away from this middle-point altogether, something which’ll likely dump out at least half the audience before those credits finally roll.

It’s not the biggest of issues, and doesn’t overly detract from an otherwise massively enjoyable debut, it’s just a shame that the consistent complexity of the first half wasn’t quite maintained. All in all A Dark Song is a ridiculously strong and beautifully acted piece of work, but one that deserves a much more satisfying conclusion.