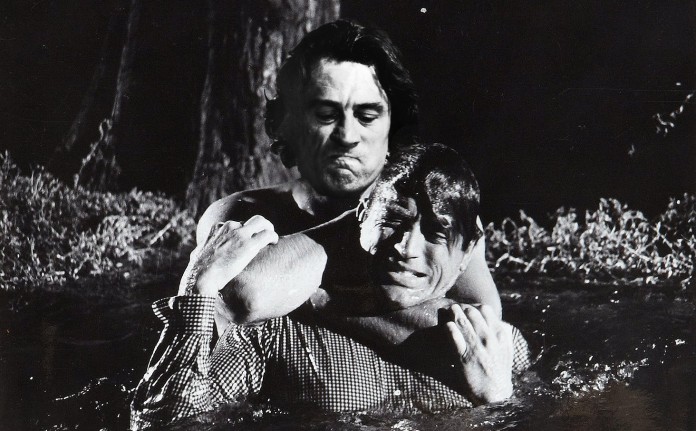 Care to take part in an experiment?

Very well.  Picture the following movies in your head: Footloose, Robocop, Fame, About Last Night, Endless Love, The Hitcher, Poltergeist, Arthur, Conan The Barbarian. What were you imagining? I’ll wager a sizable sum that you weren’t thinking about the recent remakes, but the 1980s originals – that was Kevin Bacon you were picturing sliding down the stair-rail on his hands getting a palm full of splinters wasn’t it, not Kenny Wormald (and yes, I had to look his name up).

What these remakes all share, other than their decade of origin, is that they were all box office stinkers. You can add the new versions of Fright Night, The Fog, Friday the 13th and A Nightmare on Elm Street to this disreputable list too. Of all the ‘80s movies to get remade this century, only The Karate Kid and The Evil Dead emerged with any dignity and decent returns and in both cases, creditable attempts were made to do something different with the source text.

There’s an art to the remake and there’s nothing new about them; Hitchcock even remade his own movies. Despite their low critical currency, some of the world’s most acclaimed directors have had great success reworking other artist’s material. Take John Sturges who fashioned the classic Magnificent Seven out of Akira Kurosawa’s Seven Samurai, or Sergio Leone who based A Fistful of Dollars on Kurosawa’s Yojimbo (and got a little bit sued for it). Two movies; four classics.

Spielberg’s done it (Always in 1989), Scorsese won an Oscar doing it (for The Departed), and if you were a film lecturer trying to make a name for yourself, you could argue that with only seven basic storylines in existence everyone’s been remaking the same movies since cinema began.

What then is so uniquely ghastly about these ‘80s remakes? To answer that you have to question why a film is greenlit in the first place. An original movie is pitched and made on the back of a story that someone desperately wants to tell and that someone with money thinks audiences desperately want to hear. The resulting movie might fall short of being exactly what the writer or director wanted, or it might even exceed expectation but ultimately there is at least a purity to the intent.

Sequels, on the other hand tend to be commissioned in a totally different way. “This worked, continue the story.” Well, what if the story reached its natural conclusion and to continue it would make no logical sense? (Taken 2 & 3, Speed 2: Cruise Control, Weekend at Bernies II), or none of the cast actually want to come back (The Sting II, Splash Too), or what if this has absolutely nothing to do with the original (American Psycho 2, Blair Witch 2: Book of Shadows), or all of the above (Jaws 3-D)? “Who cares, make it anyway. It’s all about name recognition.”

That, I suspect is the key to the endless procession of lousy ‘80s movies that we’ve been enduring of late. These weren’t great stories being retold by great storytellers, they were movie titles being cynically resold by artless movie execs – most of them even reused the same title fonts for the posters. This is all part of a trend that’s become especially prevalent this century. We’ve recently seen entire movies being remade simply to coincide with a cute release date (The Omen, released on 6/6/06) or remade to better complete a DVD box set (Red Dragon).

The hardest part of a remake is often recapturing the charm of the original movie. In the case of 1980s movies, that charm is due in part to the fact that the original films starred actors; interesting character actors like Kevin Bacon, Peter Weller, Craig T Nelson, Lori Singer, Chris Penn. Even ‘The Brat Pack’ (with the exception of Rob Lowe) were largely sweet but dough-faced ingénues that we all fell in love with precisely because they looked like us.

Those actors have been replaced by and large with anonymous, impenetrably uninteresting swimwear models from the pages of an Elite brochure – Frank Langella described them in his book, Dropped Names, as “a sexless set of store-bought muscles set below interchangeable screw-top heads with faces of epic blandness.”   As such, these redundant remakes, forgotten already will exist forever as all they ever were: instrumental B-sides to the big hit, never to have the needle dropped into their grooves again. Multi-million dollar Bonus Features discs, left to rot unplayed inside the packaging.

Strangely, for Hollywood is surely the world’s ultimate market forces-led industry, the studios, having sucked the eighties dry to no financial advantage (thankfully leaving The Goonies well alone), have now ploughed their furrow undaunted straight into the 1990s.

Total Recall with Colin Farrell was the first out of the traps and should really have been a final chequered flag to this misbegotten remake craze. But no, we now have a new version of Kathryn Bigelow’s 1991 surf classic, Point Break, minus Keanu Reeves, the latex ex-presidents masks or Gary Busey breathing heavily into people’s faces.

Time will tell if director Ericson Core can succeed where so many others have failed (and Stefan Pape’s review here suggests yet another dropped bollock), but he could do a lot worse than taking a gander at these six examples that demonstrate that occasionally, just occasionally, with a little skill and imagination, remakes can be even better than the real thing.

J. Lee Thompson’s black and white original was an efficient contemporary thriller upgraded to near-classic status by a genuinely shocking performance by Robert Mitchum as an avenging ex-con out to get the lawyer who failed (deliberately) to keep him out of jail.

Martin Scorsese’s remake stuck closely to the basic plot of the original, right down to the much criticized house-boat climax, but replaced the stock characters of Hays Code Hollywood with flawed, complicated, treacherous protagonists and an intricately tattooed villain who wreaks the kind of savage violence that would have made the original 1962 audience faint in their cinema seats.

Being the ultimate movie aficionado, Scorsese steals elements from the original (stars, Mitchum, Gregory Peck and Martin Balsam in cameo roles, as well as Bernard Herrmann’s terrifying score) and stitches them into his own work along with Southern Gothic notes and an increasingly unhinged religious sub-text. Aside from being one of the best thrillers of the 1990s, Cape Fear is a fascinating barometer highlighting the difference between two wildly disparate Hollywood eras

The trouble with remakes Part 2: The films you SHOULD remake, & the films you MUST NEVER remake

The trouble with remakes: The Right Way Vs. The Wrong Way to remake a movie classic