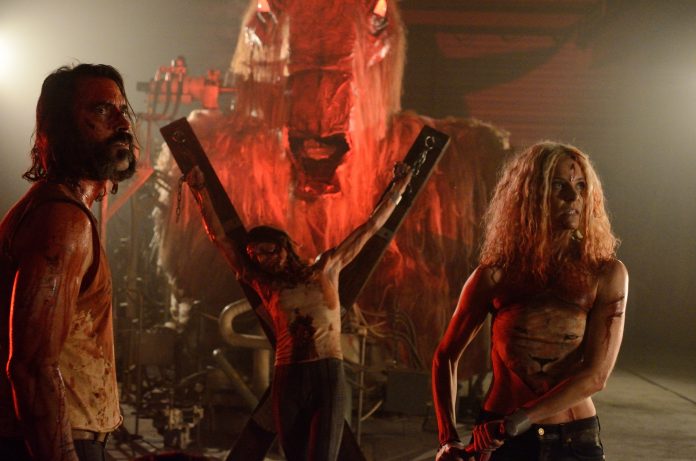 Cult hero and hard rock superstar Rob Zombie’s films are nothing less than divisive when it comes to horror audiences. Their super-stylised photography and heavy colouring can often prove a bit of a drain on the eyes at times, and his fondness for truly pushing the envelope with his own unique form of black comedy has left many in the past feeling somewhat sick. 31 is of course, no exception to this rule.

Flipping back to his love of group-orientated violence, Zombie’s latest finds a van full of carnival workers thrown into the middle of a sadistic battle for survival by a team of crazed (and apparently mega wealthy) game-makers. The rules are simple: the five remaining souls are trapped in the centre of a deadly labyrinth and must stay alive for exactly twelve hours. The only slight issue is of course, they’re not alone.

At its heart, 31 is really little more than a dressed-up Saw sequel. The eccentric costumes and pulpy setting (a rather welcome late 70s-aura) help it standout to some degree, but beneath the bright colours and loud characters it really is just another exercise in torture porn-style bloodletting. This isn’t necessarily a bad thing, but for those expecting more brains, more braun or something other than what they’ve already sat through hundreds of times before, you’ll likely be disappointed. On a base level, there’s not an awful lot new here.

The violence itself is neatly scattered throughout, and provides plenty of bloody encounters for fans who are so inclined, but it also eventually becomes rather repetitive. The same weapons, the same mood; there’s really little change in emotional state as the film presses on. Characters drop dead and injuries get more severe, but round after round, the sick game the core group are pushed into doesn’t undergo any particularly exciting shifts beyond the changing roster of cold-blooded killers sent to slaughter them.

Even on this front, Zombie stumbles a little bit too, playing one of his trump cards a little too early. It seems that the whole idea of these deluded killer-types is that they each have their own selling point. Chainsaw-wielding redneck clowns, little-’n’-large-style knife wielders; it’s a whimsical team dragged straight from the depths of a particularly screwed-up comic book, but the first to grace the screen is a Spanish-spewing dwarf dressed as Hitler, and in all honesty, it’s pretty difficult to get more outlandish than that.

Eventually he does manage it though, wheeling out an undisputed triumph in character acting in the film’s final act, in the form of a tremendously unsettling and perfectly composed Richard Brake. Having already stolen the film’s finest moment in a beautifully-styled black and white opening monologue, Brake strikes back with a genuinely shuddering vengeance, in a role that, although significantly more visually paired-back than his erratic cohorts, is one million times more effective. From his wide-eyed, toothy-grin, to the crumbling fingernails grasped tightly around a pair of switchblades, Brake is something the horror genre is in desperate need of: a brand new and original force to be reckoned with.

Aside from this though, 31’s cast is relatively unspectacular: a run-of-the-mill crew who do little beyond reading their lines and acting on edge. Even those kitted-out in kooky costumes and layers of heavy make-up aren’t particularly exciting to watch, making for a film that seems to think it’s far louder and more unique than it actually is.

Underneath, 31 is really just another slasher-come-torture-driven horror; one that is well-styled and perfectly watchable but, aside from a truly devilish Richard Brake, is rarely anything more. Rob Zombie fans will likely be in their element, but horror aficionados may well find themselves, dare I say it, a little bored.