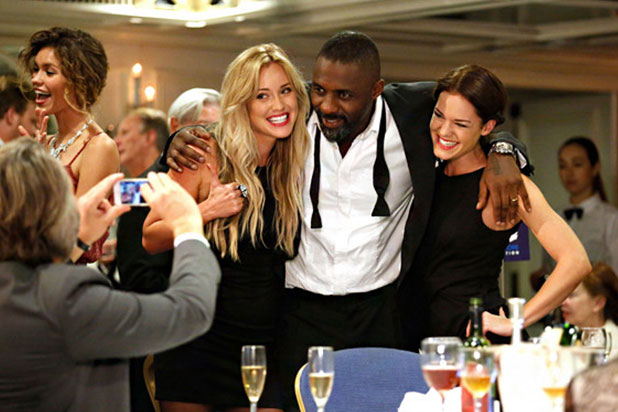 London is not a ghettoised city. Just take the area this very writer grew up in – a mere minute away from a small region affectionately described as ‘Crackhead Corner’, and yet just down the road from ‘Little Venice’. That’s the way London always has been, and in this very same region of West London we’ve seen films depicted of late in Brotherhood and Kids in Love, both exploring contrasting social classes and cultures, and without any crossover. 100 Streets seeks to rectify this, interweaving people from all backgrounds, in a fair, authentic portrayal of London life – at least that’s how it starts.

Established TV director Jim O’Hanlon makes his cinematic bow with this endeavour, which centres on five primary characters; the lauded, ex-Rugby international Max (Idris Elba), whose tumultuous marriage with partner Emily (Gemma Arterton) is on the brink of irreversible collapse. Then we have the latter’s former mentor, the thespian Terence (Ken Stott), who takes a liking to wayward youth Kingsley (Franz Drameh) – hoping to find a route out of the dangerous path he has carved for himself, selling drugs under the watchful eye of a callous gangster – all the way to cheeky cab driver George (Charlie Creed-Miles), hoping to adopt a child with his wife, only to find his life rocked when involved in an accident on the job.

Often when dealing with ensemble features of this nature, the paramount shortcoming derives from the inability to balance a myriad of conflicting narratives in a seamless fashion – but that’s the one area that O’Hanlon, along with writer Leon Butler, thrives in, remaining well within their means and maintaining a sense of simplicity, as we’ve got just a limited, manageable number of character to invest in, never feeling overwhelming or as though we’re making compromises to fit them all in. Each character is given the time to allow their own respective story to flourish – it’s just the deviation away from reality which lets this title down.

100 Streets is subscribing to the notion of realism from the offset, attempting to studiously linger over the lives of people just like you or I. But as the narrative progresses, the film grows more inane and excessive. Of course big, dramatic occurrences such as those we witness in this film do happen in real life, but given the inclination to find a contrived way to tie everything together – with intersecting characters, crossing over into other parallel story-lines, that’s when you rely on coincidence, which is a word rather hard to adhere to in this overstated picture.

There’s just this completely superfluous desire to give each and every character a big send off, and some form of closure – with respective dramatic finales that are just so needless. More subtlety is required, as this annoying urge to tie up all loose ends makes for a distinctly cold conclusion, and one that sadly undoes much of the good work achieved in the opening act.