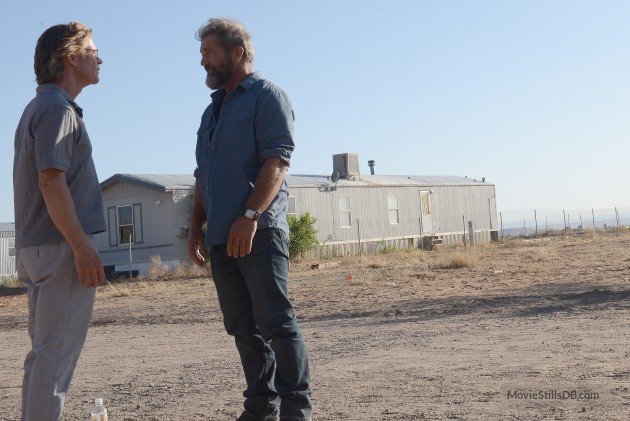 It’s been 20 years now since the release Fargo, and in just a few months the same can be said of Boogie Nights. Two modern classics that share one thing; William H. Macy. Promoting his latest endeavour, actioner Blood Father, with Mel Gibson, we spoke to Macy over the phone to discuss his new role.

He also goes on to speak about the beauty of filmmaking and the allure of Gibson. He also speaks about his forthcoming directorial gigs, while telling us that another season (or two) of Shameless is looking rather likely.

So what was it about Blood Father that initially drew you in to the project?

It was a Mel Gibson movie, and I’m a huge fan of Mel Gibson. When someone says, ‘hey you wanna be Mel’s best friend?’ I just said yes. But more to the point, I’m doing a TV show called Shameless and I have a very small window of opportunity to do any films, and this fell right into that, so that’s one. It was with Mel., that’s two. I thought it was a very well-written script, very tight, and I have a tendency to shy away from scripts that have too much violence in them and this is a little more violent that I anticipated, but I thought it was legitimate, and earned violence and I liked the role, being Mel’s sponsor, it just felt right to me.

For someone who has been involved in the industry for a number of years and worked with some of the biggest movie stars of all time, do you still get that feeling of awe when you work with someone you admire?

Yes I do, I still do. I went to dinner last night and Sly Stallone was sitting at the table and we nodded at each other, and I felt so cool [laughs]. That’s Sly Stallone, just nodding at me. So yes, I haven’t lost my sense of awe when I see these magnificent, iconic movie stars.

With Mel, when it comes to this genre he’s something of a pioneer. It must’ve been great to be working alongside him in this particular environment?

Totally. You’re right, this shoot ’em up genre, playing the tough guy, he sort of wrote the modern book on that, and it was great fun to watch him. When I met him and first walked on set, he was shooting another scene and I just thought, he’s stunning looking. He’s in great shape, and he has that gigantor, mountain-man beard and those piercing eyes. He couldn’t have been nicer too, he’s soft spoken and really sweet, and that wicked sense of humour of his creeps out every once in a while. It’s a tense movie we’re making and he’s playing a fellow who is wound up very tightly, but still we joked around a bit.

You’re working with a French filmmaker on this film – do you think it can be beneficial to the project at hand when you have a detached, foreign eye? A perspective of America that is romantically cinematic.

Well it was in this case. He got the South West, he got that look so perfectly, and I think that’s very interesting what you just said, because it’s foreign to him he sees it in a different way and boy did he do a beautiful job, it’s a very stylist looking film.

Do you ever view certain parts of America in quite cinematic terms?

Yes, I’m an East Coast boy, I grew up there and started my career in Chicago and then spent a lot of time in New York, so when I moved to California, my first impulse was, it’s all the same colour. There’s only really three different kids of trees, but when you acclimate to that, I used to go up to Joshua Tree, it’s not one colour, it’s quite stunning and the colour palette than the East Coast which is so green and complicated, but this is simpler and boy is it stunning.

You direct nowadays as well – do you find since directing when you now act in a project your relationship with your craft has changed a little? Do you view the whole experience a little differently to how you once did now you’ve been behind the scenes?

I think so. I’ve been around the block a few times so it wasn’t a shocking revelation to me, but once you step behind the camera, once you’ve seen this entire machine in action, as a director you see everything, I get back on the set and I have a deeper appreciation for how many people are working on this thing. As an actor you show up and the plan has already been made, they’ve brought in the lights and the costumes and the properties, and the set is made, as an actor it’s easy to not notice those things because you have a big scene you have to do. But now I have a much greater appreciation for how much work, and how many people it takes to make one of these films. It’s a minor miracle every time it works.

Going on a film set changed my perspective on the industry. To see that many people working that hard.

It’s very humbling. The first film I directed, I was getting towards the end of the second week and I’ve never been so tired in my life, I questioned whether I even had the energy to get into the van to go home, it was about 10 at night, and the radio cackled and one of the grips, who had been there five hours longer than I had been, said ‘I’m having some trouble with something’ and after putting in a 15 hour day, the walkie talkie lit up with guys going, ‘I got you Bobby, be right there, don’t hurt your back’. The cheeriest, happiest crew and they just love each other, and worked so hard, and after 15 hours they still love what they’re doing. I had another experience working in South Africa on a film and we were allowed to shoot on the Rhodes Memorial and it’s maybe 120 steps to get up to the top, and it’s the only way to get there. So here I was in South Africa, which is still quite segregated, and yet on our set you saw white and black people take apart a technocrane and take it up those steps, together, arm-in-arm, laughing with each other. It’s a humbling experience, it’s a wonderful thing to make a movie. That many people working that hard to make a piece of art makes you love mankind.

You’ve obviously worked with some of the greatest filmmakers ever, Paul Thomas Anderson and the Coen brothers spring to mind – when you’re directing do you find you’re often thinking about their methods and think, ‘how would they approach this situation?’

Yes, if not directly, meaning, I don’t think ‘Paul did a great shot, I’m gonna rip that off’. But I do it freely and without embarrassment. I once said to Paul, man, that’s a nice shot, and he said, ‘it’s been done before, I just rip off other people. I’ve seen every movie ever made, there’s nothing new, you’re just repackaging’. I thought, wow, I love that you said that. So I think over the years I have inculcated various styles from various directors and it’s gotta be in me somewhere. One of the things is the tone that you set on the set, that’s the responsibility of the director and producer, it all starts from the top, and the Coen brothers are so calm. They’re operation is exquisite, but ons et they’re incredibly calm, they look like two hippies who someone gave a couple million dollars to and said go make a movie. They’re having the best time, and it’s the same with Paul, he’s clearly having the best time of his life and it frees up everyone. We all have a good time.

Boogie Nights and Fargo are two films you star in, and are both arguably in my top 10 films of all time. I can watch them again and again and again – but do you ever just sit down and think, you know what, I might just stick Fargo on tonight.

No I don’t. I saw Fargo on the telly and I came in late and I saw three quarters of it, about three or four years ago, and God I thought it was good. I hadn’t seen it for a long time. I haven’t seen Boogie Nights for a long time though. I’m not very good at watching my work, there are some stuff I’ve done I’m yet to see and worse, there’s stuff my wife has done that I haven’t seen yet. I’m not an easy director I must say, I take things very seriously, too seriously. And it’s not like making art, it’s more like going to war, a Normandy invasion – you don’t go home and turn on the telly and watch a movie. On all three films I’ve directed I tried to eat before I left because I would go from the set to bed, I only direct and sleep, that’s all I can do.

I don’t know what was happening in the 90s, I was working hard. But yes in the answer, and that film have already been made we just don’t know about it yet. There are some boring times in history, certainly, I thought the 1950s were horrendous, personally. I was born then so I don’t remember it, but just looking at the styles and cars and the way people dressed and what they said, and then Mad Men comes along and we find out how fascinating it actually was. So nothing changes. There’s a great colloquial phrase; ‘A pint’s a pound the world around’.

Finally, I’m interested in a couple of projects you have lined up as a director – The Layover and Krystal. Have they both been made yet and when we can expect to start seeing them?

They are finished, and the sale of the The Layover, I think, will be announced within the week – we finally sold the thing. I have a little more work to do though, I need to replace the music. Krystal is shot and I’ve locked the picture, and all I need to do is the score and the final sound mix. That will probably go on the film festival circuit, we’ll be finished in time to apply to Sundance. The Layover is more like a studio movie though, it’s sex comedy and I think they have plans to get that out a little wider. I do believe we’re going to do another season of Shameless too. This is officially the final season but I think there’s going to be one more – possibly even two. So I’m still a busy boy.

Win Dragged Across Concrete on Blu-ray

“Dead or Alive, You’re Coming With Me” – Nicole Kidman in Destroyer & The Greatest Movie Cops