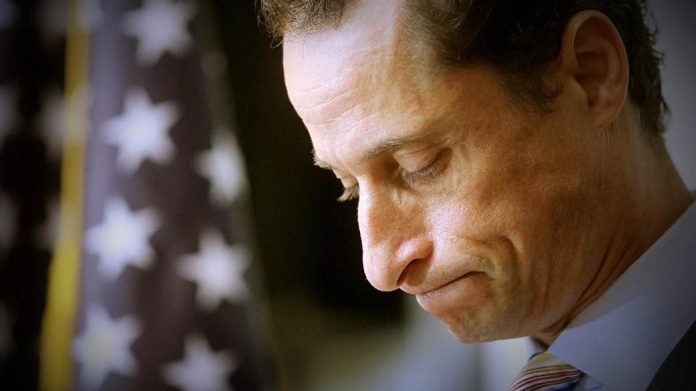 Weiner follows the New York mayoral campaign of Anthony Weiner, a former Democrat representative, who famously saw his career fall apart following a sexting scandal. In 2011, after accidentally tweeting a picture of his private parts on his official profile, Weiner was pushed to admit that he had been sexting with various women (none of which he’d ever met, none of which his wife). He was ultimately pressured to resign, and became the butt of endless jokes (of course, his last name was no help at all).

When directors Josh Kriegman and Elyse Steinberg jump into the story, Anthony Weiner seems poised on the edge of a revival. The politician has decided, two years on from his demise, to re-enter public life and make a run for the New York mayorship. The documentary could have been a powerful comeback story, a tale of a man successfully overcoming the challenges of modern life and his own flaws to earn back his reputation.

It’s this sense of possibility that makes Weiner so poignant. For a while, it looks like he might just make it. Weiner is a passionate speaker; New Yorkers appear to be willing to forgive; he does well in polling. Then, scandal strikes again. Additional sexting pictures come to light, effectively tanking his campaign.

Kriegman and Steinberg have managed to secure a remarkable level of access. Kreigman once worked for Weiner, which might explain the trust his subject places in him. It feels like we’re really witnessing everything, from Weiner’s usual routine at home with his young son, to frank PR meetings with his staff, and even tense exchanges with his wife, Huma Abedin. She herself is fascinating to watch. Close to Hillary Clinton (she currently serves as her presidential campaign’s vice chairwoman) she seems to gravitate between sorrow, amusement and resignation as her husband’s fate fluctuates. It’s both affecting and disturbing to see someone so influential at their most vulnerable.

Weiner is far from a vanity exercise – the documentary captures moments much too painful and intimate for that. At one point, Weiner even snaps at the person holding the camera, telling him in essence to shut up. Yet, at the same time, the directors are obviously sympathetic to their subject. There are too many scenes of Weiner receiving ecstatic support in various New York parades; meanwhile cuts to his contender De Blasio (who ultimately won) gratuitously mock him. More frustratingly, Kriegman and Steinberg never really get into the facts of Weiner’s scandals. What was said, exactly? How did the information first come to light? The news footage inserted to give us context only gives us a vague idea of the events.

Where Kriegman and Steinberg shine is in their emphasis of the greater themes at work in Weiner’s story. There is, for instance, the eagerness of the media to pounce on a salacious story to the detriment of reporting on anything policy-related. And ironically, it doesn’t seem to be Weiner’s personal life that voters are put off by; rather, it’s having to hear about it over and over again. There is also something to be said about our eagerness to shame in an age of social media (something journalist Jon Ronson has written extensively about, including in his book So You’ve Been Publicly Shamed).

All in all, Weiner is an engaging character study. It could have done with a trimmer edit and a little more of the factual, but it still remains an engrossing insight into the private and public aspects of American political life.