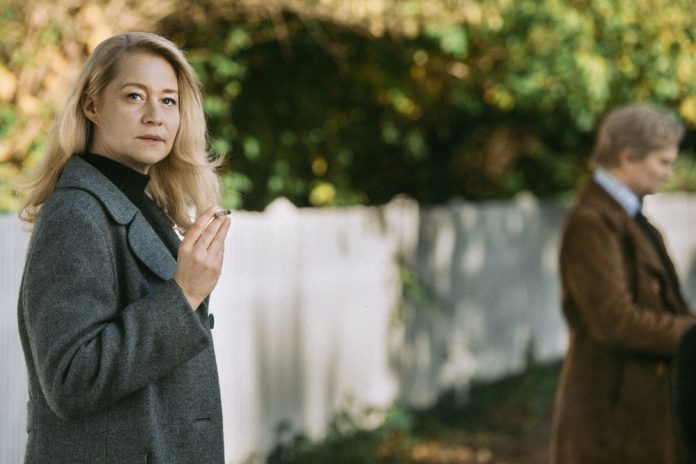 As one of the finest exports to have come out of Danish cinema, Trine Dyrholm shows off her acting chops in her latest endeavour The Commune, with regular collaborator Thomas Vinterberg.

The actress discusses her working relationship with the esteemed filmmaker, while also speaking of her own experiences living in a commune. She then goes on to talk about the roles she is being offered as she gets older, and the industry’s ingrained issue with beauty.

Has it got to a point with your relationship with Thomas, where there’s such an implicit amount of faith and trust in him, that if he comes to you with a project, you just say yes off the bat without knowing too much about the story and character?

I like to get involved when I work, I like to be co-creative, and he is the kind of director that allows that, so I would go with him anywhere, yeah. He invites me into the process and discusses the character and script and he listens to things, and he’s so talented – I would go far with him.

What sort of input did you have?

I think it’s very difficult when the movie is done to say, ‘well this bit was my idea’, I actually don’t like that, it’s co-operative work, and it’s his script and his film. I can just say that he was very generous and when he asked me about the film the script was not finished and he listened to my comments and we worked it out together. He’s a director who is inspired by the actors he chooses and it’s not only me, everybody in the film is involved. If you have comments or if you improvise things he adds it in, if it fits.

The film is set in the 70s and it seems even more modern than nowadays. Do we lack that same sense of experimentation?

I think we can be thankful that they tried out so many things, and I also think that they were not aware of consequences, but I think the ideals were actually good, some of them. It just had a naivety that we can better. We have to share more than we do, and we have to experiment more, but knowing the consequences, and maybe that is the new way to do it.

Can you imagine yourself living in a commune?

I’ve tried it, I lived there for half a year when I was 17 because I had to make a film in Copenhagen and I moved into my cousin’s commune which her father started. I have lived with people sharing apartments many times and I don’t know if I can live in a commune like that, but that is mostly because of the privacy, your whole private life is played out in front of an audience every audience by the dinner table and that must be a little exhausting, but I like the basic concept of sharing and I lived together with my man. We’re not married so I don’t know what to call him. My man? Anyway, and our child too, and we’re actually aware of not only being our little family we eat together with the neighbours and have a lot of friends and we share things, and I like the concept of being bigger families actually, maybe we don’t have to live together but sharing things and learning from each other, I like that.

Is this common in Denmark – to be so open?

No, it’s not always like that. But it can be like that. I don’t think it’s common, but back then there were a lot of communes in Denmark, it was a big thing and I know that these days many young people live together and share apartments because they can’t afford it otherwise, but that’s how it is everywhere.

So why do you think your character would put herself in such a position?

That’s why it’s interesting, because I like a character who fails and tries, and I think that she’s a little bored in life, she wants to explore, she is uninspired by the traditional family life in a way, and that’s why she convinces him to make this commune.

Are there similarities between a commune and a film set?

They’re kind of the same in a way. We share dinner, we share stories, we share everything, but we don’t have sex together. Well, most of us don’t. But of course you make small communities, but that’s how it is everywhere.

There’s also the theme of the character feeling older and rejected – as a woman in the film industry, is that something you can resonate with?

I realised some years ago that I was in the old generation and there’s now a new generation after me, because I was in Love is All You Need and A Royal Affair and suddenly I was the mother of grown up children and I thought, this is a big mistake, I’m not the mum yet, but I was. I find it interesting, I am of course aware that I am getting older, but I have to say it’s much more fun now. Hopefully can still get interesting parts and I will invent some at least, I will try to make it happen.

In what way is it more fun?

I’m much more free now. I’m worried about my child, the future, the world, but in my own person I don’t care so much, I don’t see myself so much from the outside as I did before. When we talk about getting older in my business, I am not vain when it comes to acting, I have a lot of vanity when I am at the red carpet, I want to be the movie star, I play the part of the movie star, it’s fun – but when I act, I think part of being an actor is to show the darker side of human emotions and that’s not always a pretty site. I think that’s very important, because there is a problem with beauty in the business.

Is that partly why you’re still making so many films in Scandinavia? Because these roles for women don’t exist nearly as much in America, or even the UK?

I just look for the good parts and if there is an interesting part in the US I would go, of course. But you’re right, sometimes I joke about how I look like a human being and that could be a problem in the US. When we made Festen, there were some offers from agencies asking if I’d like to make films but I wasn’t ready at all, I was so insecure, I wasn’t ready for that dangerous world. Now, when I feel ready, I’m too old. I just try to do it my way and there are some good role models there, like Meryl Streep, who has managed to get old with gratitude and I admire how she plays very diverse parts and Helen Mirren too I’m a big fan of, and Isabelle Huppert. We can just make it happen.

Meryl Streep has gone on record to say that there is a difference in salary between women and men, have you ever experienced this – is it as common in Europe?

I suddenly found out, many years ago, that it was like that and I couldn’t believe it and I wanted to change it, so I’ve done some work for it and I think the thing is, women are not so good at negotiating. It can be difficult because they argue, they tell you that you don’t sell too many tickets and you think, ‘oh no maybe that’s right’. I think that men are better in that room, and we have to better there. We have to practise on that.

The Commune is released on July 29th.

Mads Mikkelsen stars in trailer for ‘Another Round’