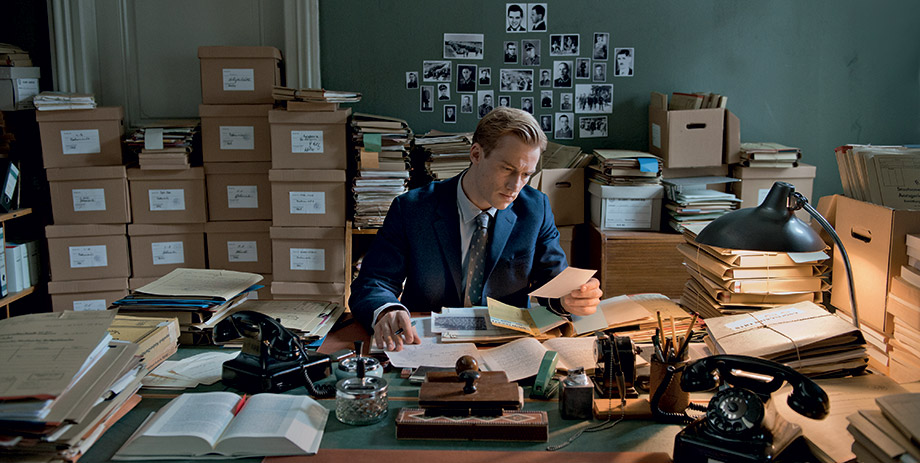 Almost 70 years after the end of WWII, the poisoning of German society by Nazism remains an understandably troubling subject for Germans to address and acknowledge openly. Director Giulio Ricciarelli’s debut feature Labyrinth Of Lies highlights how a society which was rightfully ashamed of its monstrous transgressions went too far in burying its shame, which allowed the guilty to escape punishment for their crimes.

In the immediate decades following the end of the war, with assistance of the occupying Allies and their ‘de-Nazification’ programme, the German establishment worked so diligently to erase the grim spectre that hovered over the country that a little over a decade after the war very few people (particularly the young) were aware of the scope of the Final Solution and the reality of the concentration camps. In 1958, young prosecutor Johann Radmann (Alexander Fehling, Inglourious Basterds) is made aware of an Auschwitz SS guard working as a school teacher, which is forbidden under German law. His immediate superior wants nothing to do with pursuing the man, and when Radmann informs the Ministry of Education of the teacher’s past, they take no action to remove him from his position.

Refusing to let the dark past of unpunished Nazis remain buried, and with the support of his ultimate superior, the Attorney General of the German Republic, and a crusading journalist, Radmann begins a dogged pursuit of both powerful and humble former Nazis who suffered no consequences for their actions, despite the efforts of many individuals and organisations including the police and the U.S. Military to dissuade him.

Labyrinth Of Lies succeeds because of a continuing fascination with the subject matter and sympathetic performances rather than cinematic flair; the film is pedestrian looking, perhaps indicating its origin as a made for TV production. In order to shine a little light amidst the darkness of the proceedings, a subplot involving Radmann’s romantic life is given more time than necessary, which distracts from the pursuit which drives the narrative. But this really is Fehling’s film to carry, and he’s excellent as the initially naïve and idealistic prosecutor who becomes increasingly overwhelmed by despair, as his belief in the righteousness of his cause is shaken by his inability to make headway in bringing the guilty to justice.