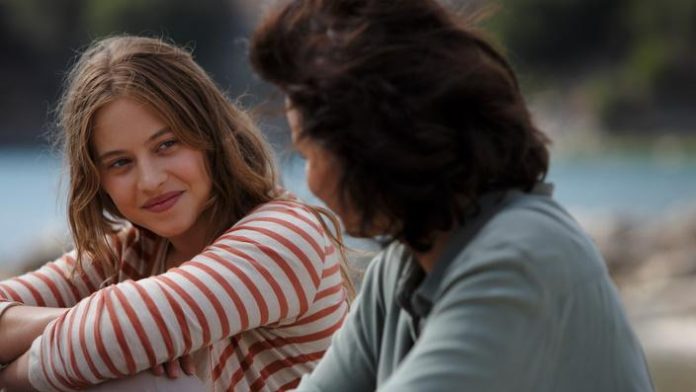 Giuseppe is dead. We aren’t sure exactly how, but we’re certain that he is no longer with us, as we watch on while his bereaved mother Anna (Juliette Binoche) lays her son to rest. It’s this very vital nugget of information which lays the foundations for this dark, compelling drama to thrive on, placing the viewer in a position of unfortunate power.

The reason being, Giuseppe’s partner Jeanne (Lou de Laage) is blissfully unaware of her lover’s death, travelling from Paris to his family abode in Italy. The trip has been in the diary a while, and after a row and the subsequent period of not talking to one another, Jeanne decides to make the journey nonetheless and attempt to patch things up. Upon her arrival, where the mood is bleak and atmosphere desperate, she senses something isn’t quite right – and rather than merely explain the tragic situation, instead Anna pretends her son is alive and well, visiting family. Jeanne sticks around waiting for Giuseppe to return home – though she could be looking at quite a while.

Everything about Piero Messina’s debut endeavour feels so meticulously crafted. Every frame, every shadow – it all feels so deliberately placed. He lets his camera just linger too, allowing for the viewer to study the environment and help to enforce this notion, while the lengthy sequences make for pensive viewing, as we fall into a similar bout of silence that Anna is suffering from, shadowing her emotional turmoil, getting lost in thought, always vacant.

The Wait is a truly fascinating study of grief, as the withholding of news is not born solely out of the fear of sharing such devastating news and breaking poor Jeanne’s heart, but it allows Anna to believe her son is still alive, to live under this false pretence which prevents her facing up to reality. But that’s not all, she seems to get a kick out of Jeanne’s infectious sense of naivety, listening to stories, learning about her son, enjoying the time spent in the company of somebody who simply doesn’t know. Meanwhile the youthful exuberance of the young woman serves as a reminder of what her son has been deprived off.

The reason The Wait works as a piece of cinema, is because you oddly will Anna on. Though completely aware of how ethically twisted the situation is, and how much harder it will be to swallow for Jeanne when she learns of the truth, such is the emotional bond formed between the viewer and Anna, that watching her regain a semblance of happiness during this grieving period is hard to begrudge. It helps matters a tremendous amount too when dealing with an actress of Binoche’s calibre, as she proves, while performing in Italian, that she’s one of the very best in any language.

Colin Firth & Toni Collette star in teaser for ‘The Staircase’

Win My Life is Murder Series 2 on DVD