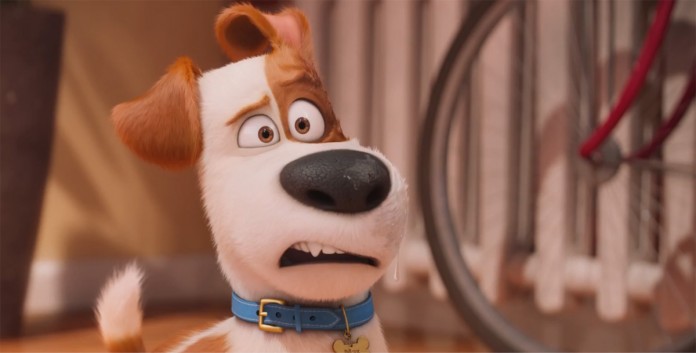 What do our pets do when we’re out at work? A question many of us have asked ourselves, and often, we see the evidence on the kitchen floor when we get home. Making for a brilliant concept for an animated endeavour, in order to enlarge this idea cinematically, there’s an obligation of sorts to implement action and drama into the narrative, particularly to appease the younger members of the audience – and as such we deviate carelessly away from the endearing sense of simplicity that lays the foundations for this production to thrive off. What transpires is an adventure that spans the streets of New York City. Inevitable, but frustrating all the same.

Taking place in a Manhattan apartment building, we meet Max (Louis C.K.) devoted to his owner, to an extent where he sits by the door, every day, all day, awaiting her arrival. Until one fateful afternoon, when she returns home with the worst gift imaginable; a new dog. The scruffy mongrel Duke (Eric Stonestreet) is hoping to make a new friend, but Max wants him out – and in a bid to freeze Duke out during a walk, the pair find themselves far away from home, without their collars, and on the run from the callous animal rescue employees. However they have far bigger problems on the horizon, for an adorable and yet sinister abandoned bunny Snowball (Kevin Hart) is seeking an irrational vengeance on all pets that belong to an owner.

The Secret Life of Pets thrives in the small subtleties and distinctive character traits that belong to the vast supporting cast of local pets. Each displaying sensibilities that belong to their particular breed, it provides a constant source of comedy, all going on in the background. The co-directors Chris Renaud and Yarrow Cheney have form in that regard, for Despicable Me was too enriched by the Minions, never at the forefront of the narrative, but persistently stealing the show. The voice cast impress too, Hart in particular, but also the likes of Steve Coogan, Jenny Slate, Lake Bell, Albert Brooks and Hannibal Buress lending their indelible vocal talents to this endeavour.

You do feel that the picture may work better as a series of shorts however, perhaps each taking place in an apartment within this towering block, for the film does struggle to sustain a feature length running time, as the narrative becomes contrived as we leave behind their home and move on to the sewers, adopting the tropes of your archetypal kids adventure flick, without any sense of ingenuity.

Talking of which, the film is a carbon copy of Toy Story – a tried, tested and triumphant formula of course, but this is unashamed in its similarities. Not just the overriding notion of things coming to life behind their owner’s back, but the whole premise is built around Max’s kinship with his owner (much like Woody’s with Andy) and his disdain at the arrival of a new pet in Duke (much like Buzz Lightyear) only for them to be withdrawn from their owner altogether and have to find their way back home. Naturally comparisons to a film as wonderful as the aforementioned Pixar production is never a bad thing, but then again, when coming up against arguably the greatest animation of all time, it’s difficult to not pale in comparison.