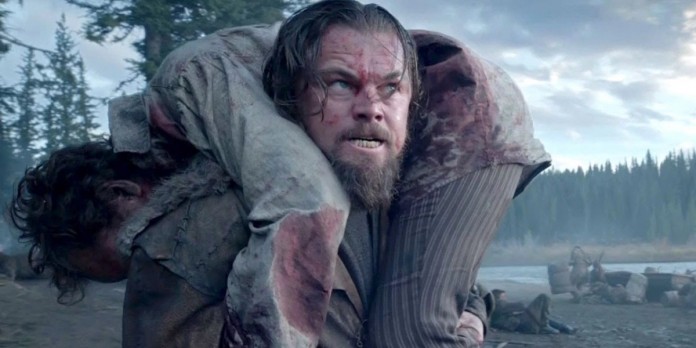 Alejandro González Iñárritu was somewhat fortunate when collecting an Academy Award for Best Picture for his preceding endeavour Birdman. But now, almost a year on, it’s fair to say that the Mexican director would be gloriously unlucky not to win the very same prize, as he presents the brutally immersive, absorbing drama The Revenant.

As another addiction to the popular sub-genre of survival movies, unlike the likes of Cast Away, Life of Pi or Gravity – this narrative is based on real life events. Set in the 1820s, we delve into the life of frontiersman Hugh Glass (Leonardo DiCaprio) who is venturing around the unforgiving landscape of the American Mid-West alongside a collective of trappers, including his half-indigenous son Hawk (Forrest Goodluck), and captain Andrew Henry (Domhnall Gleeson).

However on one fateful day Glass encounters a wild family of bears, and when approaching the cubs with his rifle, the mother attacks – and mauls this man to pieces, and though remarkably it’s Glass who provides the fatal blow, he is left in a precarious state. Fellow trappers Jim Bridger (Will Poulter) and John Fitzgerald (Tom Hardy) are provided with the task of carrying his body through the snowy wilderness, but the latter decides it’s not worth the trouble for a man unlikely to survive, and so leave Glass for dead. But they couldn’t prepare themselves for the courage and depths this man will go to, to stay alive, and seek vengeance on those who wronged him.

The Revenant is a production like no other, and so savage with it. You hear every single thud, every gunshot pierces through you and the harsh howl of the wind is a chilling addition. Iñárritu places his audience right into the scene and it makes for a truly gruelling cinematic event. The running time is by no means modest either, but again this seeks only in enhancing the tedium, you need to be uncomfortable, it’s all part of the immersion and the experience – for that’s the only way to describe what this film is; an experience.

You can almost feel Glass’ pain, physically speaking – the close-ups of his face, drenched in anguish, complete with strained vocals, and dribbling. But to counteract this brutality, comes a deep spirituality that enriches this narrative, born out of the native folklore (not to mention the serenity to the landscape), which contradicts the barbarity on show.

It’s a masterclass of filmmaking from Iñárritu, and the way he presents conflict is not too far removed from Birdman’s single take style. It’s beautifully choreographed, as we move from one victim to the next, as the fight sequences between the trappers and the natives appears almost like a relay race, except one where the very last thing you want is to pass the baton on. The human beings are the chief antagonists of this piece too, as while you empathise with Glass and root fervently for his cause as he fights a war against nature (both the animals that inhabit it, and mother herself), it’s his human counterparts, and in particular Fitzgerald, who remains the leading adversary of the piece.

The Revenant also feels like DiCaprio’s turn for an Oscar. He took down a bear for crying out loud, give the man a gold statue (of course it didn’t actually happen, but the effects are so staggeringly impressive, you do have to think twice). It’s the stand out scene to this exceptional feature, and one so good, that you wouldn’t be disappointed to see the bear getting a nod for best supporting, too.