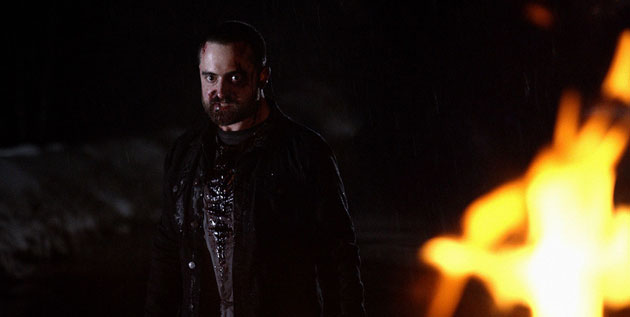 Writer/ Director Joe Begos’ hat-tip to 80s psychokinetic horror plays more like a film from that era than the Turbo Kid-type of homage one might expect. References to Cronenberg, Carpenter and De Palma are glaring throughout but The Mind’s Eye stands distinctive due to the energised camerawork, sharp editing and lithe narrative as well as its flagrant love for the films that inspire it.

Nomad psychokinetic Zack Connors (Graham Skipper) is quizzed by passing police on a country lane. After launching the cops across the road with his mind, Zack is carted to corrupt medical research facility, the Slovak Institute of Psychokinesis. Once there he is detained for research purposes and meets fellow psychokinetic/ estranged friend Rachel Meadows (Lauren Ashley Carter). The couple plan an escape while conniving company workers plot to harness their power for malevolent purposes. Corporate scumbag Dr Michael Slovak (John Speredakos) is the company head who grows exceedingly more evil as the story progresses, while supporting characters (henchmen, friends and family members) turn up to check out via explosive, blood-gushing and limb-popping death scenes.

Set in the early 90s: The Mind’s Eye dots its plotline with spats of exposition, fiery hyper-violence and thunderous action, ranging from straight-up fisticuffs to elaborate mind battles. Cue an incredible screaming, war-face stare-out where lobes protrude like snakes on steroids and threaten to burst over everyone.  The production is cut-rate but ambitious and styled to nuzzle the budget limitations (showing shrewd enterprise on Begos’ part). There haven’t been too many psychokinetic horrors which also makes Begos’ second feature all the more welcome. Playing like a product of the post-cyberpunk subculture, cut down in its prime by the turgid Johnny Mnemonic, The Mind’s Eye also incorporates the darker side of 90s sci-fi/ action films like Split Second, Event Horizon and Dark Angel, as well as the aforementioned 80s titles.

Begos stated that he set out to make a film that could be a sequel to Scanners while Steve Moore’s score is pure John Carpenter, complete with throbbing Casio beats and violent synth stabs. While the script dallies at the halfway mark, events erupt into wild action for a skull-juddering finale where bones crack, eyes bulge, heads explode, faces collapse and Zack battles it out with Slovak in an exhilarating mind-off. Other psychokinetic  characters turn up to mentally lob objects from chair legs to cars and the last half hour goes some way to compensate for production blemishes and dicey performances.

Begos fails to spring resounding drama from his cast (it’s not just the actors’ fault), despite proving a dab hand at action. With practice he could mature into a remarkable film-maker who’s style may even fit well within the Marvel Universe. With his latest, the acting may be stilted and the story sojourns in the centre for a pit-stop, but The Mind’s Eye remains a rousing slap of sci-fi/ horror pulp, adorned with an iridescent, anarchic love. It’s a huge improvement on Begos’ curiously bungled debut (Almost Human), but has the similar warped fancy which signalled that out from the sea of DTV silage that plagues our streaming/ rental sites.

The Mind’s Eye is an electrifying, retina-searing, sense-bombarding b-flick that will leave you lobotomised, if not shell-shocked, and half smiling in a mad kind of way.